Skip to content
Home » Drums » Alesis DM6 Review – Is This Right For You?

If you’re here, it is almost certainly because you are considering getting the Alesis DM6. We appreciate that you want to know what this drum set is exactly about instead of just running along to get it.

This is why we’ve carefully sorted through the different features on the Alesis DM6 and what each of them is good for. And of course, all that is what you’ll get to find out in this review.

If you are down for a detailed review, then you’re in the right place. However, before we go ahead to talk about each of the features, let’s tell you a thing or two about the brand. 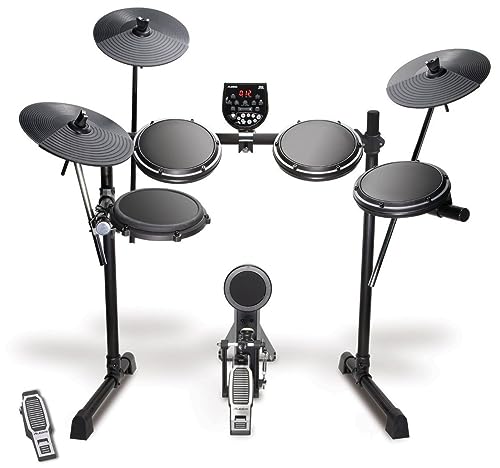 Alesis is really the company for the musician and basically anybody that is interested in making music. The company has actually come a long way from its semi-conductor chip technology beginning in 1980.

Now, Alesis creates and carries all sorts of music production equipment including drum machines, mixing consoles and synthesizers. Of course, it also produces musical instruments including keyboards and drum kits.

In 38 years, Alesis has managed to assert itself as a reputable music equipment brand. Now that you know a few things about the brand, we feel comfortable enough to tell you what the Alesis DM6 is about. Let’s do this!

Features Of The Alesis DM6

Alesis tried to make the Alesis DM6 have as natural a feel as possible and we think it is safe to say that it achieved what it set out to do. By natural, we mean Alesis tried to mimic the feel of a traditional drum set.

The pads and cymbals on the Alesis DM6 are made of natural feeling rubber. This helps in reducing vibration feedback.

Now why is this even important?

Well, you should bear in mind that the Alesis DM6 is an electronic drum. And a good number of electronic drums usually come off sounding kinda artificial.

However, the way the Alesis DM6 is constructed reduces vibration feedback is making the drum set sound as natural as possible. This alone makes the Alesis DM6 good enough for a beginner who wants to start out using an electronic drum set. 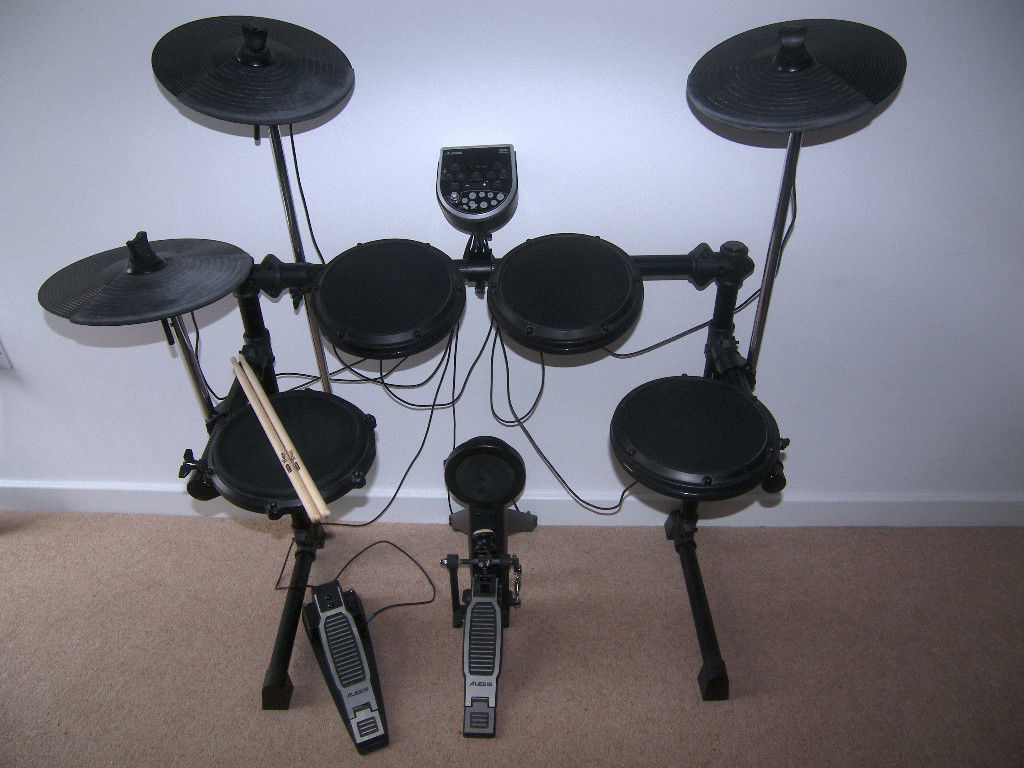 Moving along, the Alesis DM6 comes with its own mount that is made of aluminum. We think aluminum is a good choice because it is light enough to be carried around easily while being sturdy enough to hold all it needs to.

The pedals are also quite sturdy and should survive all the marching. However, what is probably a weak link on the Alesis DM6 are the sticks.

They won’t last more than a couple of hits. If you’ll be getting the Alesis DM6, be sure to get you a sturdier pair of sticks.

All in all, we think the Alesis DM6 is very well constructed and so should last for a decent period of time. The sticks shouldn’t be so big an issue.

We’ve already mentioned that the Alesis DM6 would be a good idea for beginners and we are about to give you more reasons.

Firstly, the DM6 sound module is easy to operate. The control buttons are properly tagged and so you don’t need to rack your brain to work it. Also, you get an instruction manual with the Alesis DM6 to make things even that much easier.

Alesis has helped put together 10 drum sets using a blend of some of the 108 different sounds. The remaining 5 slots are for you. Yes! You have 5 slots to put together whatever drum set you want. 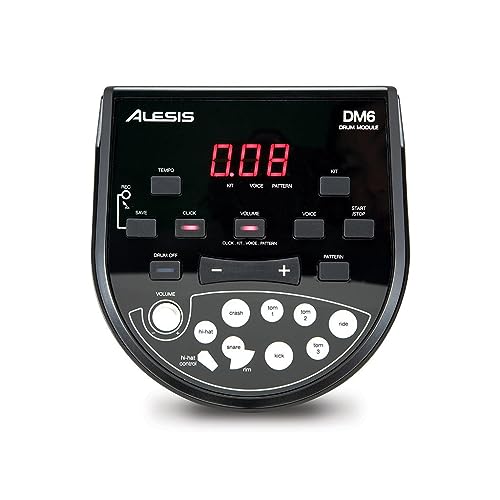 What’s more? You can have even more sounds. You’ll need a MIDI-USB cable which the Alesis DM6 doesn’t come with, though. So add that to the list of things you need to get if you’ll be going with this drum set.

Anyway, that cable should connect your device (the Alesis DM6 is compatible with practically any computer) to the sound module.

Once that’s connected, you can make your drum set sound like practically any musical instrument, including a keyboard.

If you would rather jam to your favorite song, that’s also possible. You’ll need an audio cable that can connect your device (mp3 player, tablet, phone or whatever) to the sound module (another thing you need to get). With this, you can drum along to any song on that device.

We’ve already pointed out that the pads and cymbals are  rubber which reduces vibration feedback. We also said that the rubber surface makes the drum set sound more natural.

However, there are a few more things you need to know. For one, if you want your drum set to sound acoustic, you shouldn’t be thinking about the Alesis DM6 because it doesn’t sound anything close two acoustic.

Furthermore, the cymbals do not choke. What does it mean for cymbals to choke? When you hit a cymbal that chokes, it rings for a reasonable time length and stops.

On the other hand, a cymbal that doesn’t choke will just continue to ring for a long time and you’ll probably have to stop it yourself. This is what the cymbals on the Alesis DM6 will do to you. They sound great but do not choke.

Now about the pads. They sound great too and can project sounds as high as 60 decibels. Plus, the pads are sensitive enough to pick up ghost notes too.

One other thing, you cannot mute the hi-hat. That is, the hi-hat is either totally open or totally closed, no halfway open.

This could be a good thing if for any reason you will be drumming in a concert or something. However, if you want to do your thing in the comfort of your privacy, a totally open hi-hat could hit the wrong nerve.

So, if for some reason three single zone toms and three cymbals are not enough, the DM6 Kit cable snake will come in handy. It has two inputs which should allow you attach two extra pads at the same time.

The Alesis DM6 is not your regular drum set that just gives off sounds loud enough as it is hit. You’ll need a kind of outlet to properly hear what you’re playing, seeing as the Alesis DM6 is an electronic drum set.

With the Alesis DM6, there are two possibilities. On the one hand, you could get an amp and connect to your drum set. This way, when you play the drums, everybody will be able to hear you. Also, if you are in a band and you guys have PA that could work too. 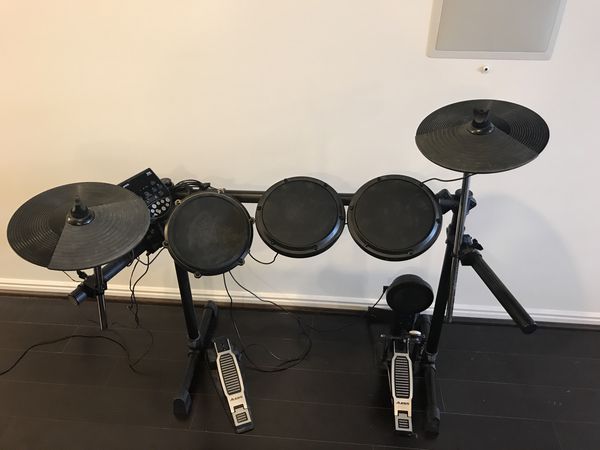 On the other hand, if you want to play for your ears alone, you’ll need to get real good headphones. Or, you could get an adapter, attach it to your Alesis DM6 and attach your regular earpiece to the adapter.

Now, this is not exactly part of the output features, however, it needs to be said. The Alesis DM6 does not come with its own drum seat. So yes, add that to the list of things you’ll need to get if you’re going for the Alesis DM6.

Pros Of The Alesis DM6

Cons Of The Alesis DM6

If you’ve decided that an electronic drum set is the way to go, you could do well with the Alesis DM6. With 108 sounds and 15 possible drum sets, you have a decent range of sound and set options.

Sadly, the options are not wide enough to satisfy all your drum sound thirst. However, if you are a beginner, you should be fine with this drum set. Plus, it doesn’t hurt that the Alesis DM6 doesn’t cost as much as most other electronic drum sets.

So, do we dig the Alesis DM6? The answer to that is yes. The more important question, though is, do you?