If we were to take a guess, we’d say someone recommended the Alesis Surge Mesh Kit to you. However, you’re still not fully convinced you should sink your money into a purchase of the kit. So, you looked around for a trusted review and found us.

Is that right? Well, at least, it’s something close to that, isn’t it?

Anyway, we’re all about the Alesis Surge Mesh Kit today and there’s loads to learn. In the first place, the Surge electronic drum series entered the market as the cheapest electronic mesh heads the market has ever seen.

This is already one huge advantage as Alesis literally took the once elusive mesh heads and gave it out to everyone for “free”. But what’s more to this kit? We know you’ve got loads of questions. Thankfully, we have loads of answers too. So, come along and let’s show you around this kit. 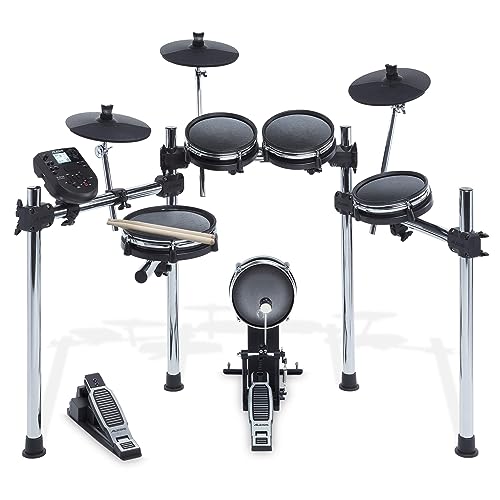 Impressively, we found that all the four drums are dual-trigger. This means that both head and rim are playable. And we have to commend this because you seldom find this at such an affordable price point.

That said, this kit also comes with a kick tower. However, it is quite small at just 8 inches. But then again, even though the kick tower is a little too small, it still boasts a reassuring level of sturdiness. Plus, it’s also great to know that Alesis also threw in a bass drum pedal. You’d agree that you don’t always find this.

How Do The Pads Feel?

Now, one thing that really endeared us to this kit is the fact that it comes with mesh heads. However, what even sealed the deal further is that, even with mesh heads, the kit is still very much affordable.

However, the good part about mesh is that the difference is only slight. At least, when compared to rubber heads, mesh heads are much closer to the real thing. This is why everyone seems to be crazy about getting mesh heads for their electronic drum kits. 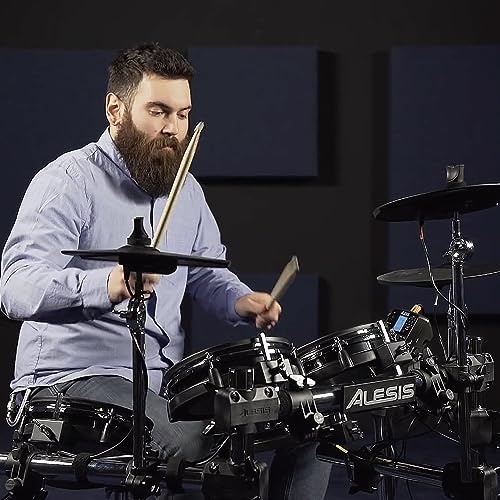 Another advantage that mesh heads offer is the fact that you can tune them just like acoustic drum heads. For instance, the Alesis Surge Mesh Kit comes with tiny lugs around the rims of the snare and toms. So, you get to tighten your drums to your liking.

Of course, even at that, there will still be slight differences. But generally, the pads feel great.

The cymbals here are really nice. They are three in number and all measure at 10 inches in diameter. Well, truth is that, in size, these cymbals aren’t actually the best. They are a tad too small. We’ve seen cymbal pads that measure as much as 15 inches. These are just 10, a whooping 5 inches smaller.

Plus, these cymbals only come with a single trigger unlike the snare and toms that are double trigger. So, you can only achieve head playing here. Don’t even think of achieving any separate crash or ride bell sound.

Nonetheless, you’d be pleased to find that the ride and crash are chokeable. This is a nice touch for which we commend Alesis. 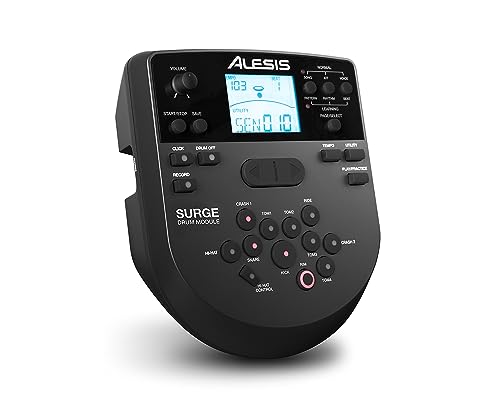 The hardware Alesis uses here is a four-post chrome rack. It’s super easy to put together, although you won’t find the slotted poles that Alesis uses on its higher end kits. Nonetheless, this rack does a fine job of holding every aspect of the kit in place with little to no movement.

The sound module here is the Surge Module. It is quite similar to the sound module you find in the Nitro model. However, this one comes new and improved to accommodate the upgraded kit.

The module comes with an LCD screen measuring 6 centimeters. So, it’s super easy to navigate this system thanks to the page navigation system here. It’s simple and quite easy to follow. So, you can move across the song, voice, kit and training menus easily and swiftly too.

At the bottom of the module, you find rubber buttons which correspond to the different parts of the kit. They have a simple and easy configuration. Plus, they light up when you strike each pad which is really cool. 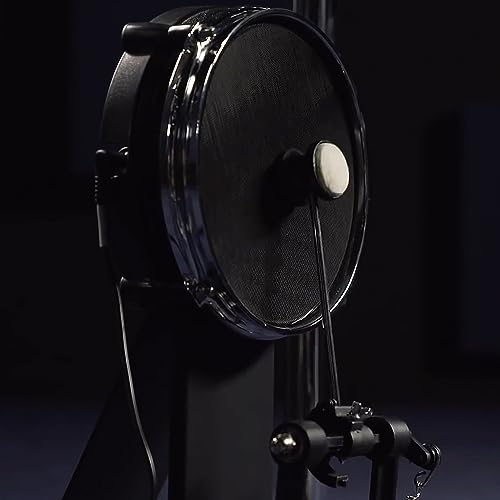 So, with this, you will find it really easy to switch between instruments and tweak your settings. The module comes with 40 kits which further breaks down into 24 presets and 16 user kits.

Furthermore, this sound module comes with as many as 385 unique sounds from drum kit to electronic sounds to percussion, to sound effects (like DJ scratches!).

Also in this module, you get 60 inbuilt play-along songs. They are great as they encourage practice for the drummer.

More so, for connectivity, this module features several jacks and inputs. For instance, there’s the mini-jack headphone out. Then there’s also an aux in, with left and right quarter inch master outs. And let’s not forget the MIDI in/out and USB connections.

Lastly, the kit itself connects with a 25-pin cable loom which Alesis includes in your kit. Plus, there are two additional inputs for an extra cymbal and a fourth tom. So, yeah, if you were asking, there’s totally room to expand your kit.

Some of you might be wondering which is a better buy between the Alesis Surge Mesh Kit and the Alesis Nitro Electronic Drum Kit. Well, both kits are actually quite similar in many respects.

Take the sound module for instance. Although they go by different names, they look and function exactly the same. They offer the same functions, the same number of preset kits, as well as the same sound range.

Nonetheless, there are still a few differences. For instance….

In the hardware department, the Alesis Surge features a chrome rack while the Alesis Nitro rack is aluminum. So, what’s the difference? Well, for one, chrome looks much more professional than aluminum. So, one would feel a lot more comfortable using the Surge onstage as compared to the Nitro. 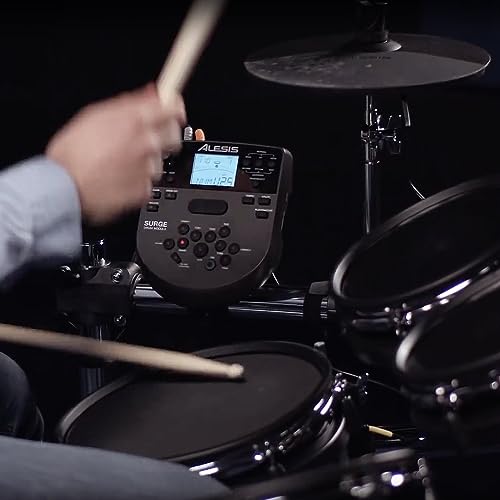 The Nitro might be a better option for a practice or rehearsal room.

Next, the kick drum pedal in the Surge Kit is much larger than the one in the Nitro kit. So, ultimately, it’s possible for you to use a double bass pedal with the Surge. However, you might not be able to do this with the Nitro Mesh Kit.

And since we are here, can we register our confusion? Because the non-mesh version of the Alesis Nitro can actually accommodate a double bass pedal. So, it beats us why Alesis decided to step down on that with the Nitro Mesh Kit.

So, these are the two major differences. Besides those, these kits are actually quite similar. If you ask us, we’d tell you to go for the Nitro if you just need a practice kit. But if you need something you’d be proud of on stage, then the Alesis Surge is definitely a better buy.

Finally, price… Of course, the Alesis Nitro is a tad cheaper than the Surge.

The major flaw of this kit is its kick pedal. It has this toe stop that comes about 2 inches from the top of the deck. This will present a huge problem for people with big feet. Why? Well, because it will be difficult for them to rest their foot completely on the deck.

Besides, that it’s hard to fault this kit, especially for its size.

In summary, we are really impressed by the Alesis Surge Mesh Kit. It comes with all the functionalities most drummers need. But what even impresses us the most is that even with mesh heads, this kit is still so affordable. It’s literally a giveaway!

So, get this kit if you need a professional looking and sounding kit but can’t afford to spend thousands of bucks. You won’t regret it!