As technology advances, the way we make music does as well. Thirty years ago, if you wanted to make a professional sounding recording, you only had one choice. Visit a professional recording studio and pay lots of money.

But, as time and improvements in technology moved on, we started to get very basic multitrack recorders – the 4-track porta-studios from Tascam and Fostex. Wow, all of a sudden we could record more than one track! But when you had recorded three you had to mix them the best you could, then bounce them to the fourth track and start the whole process all over again. 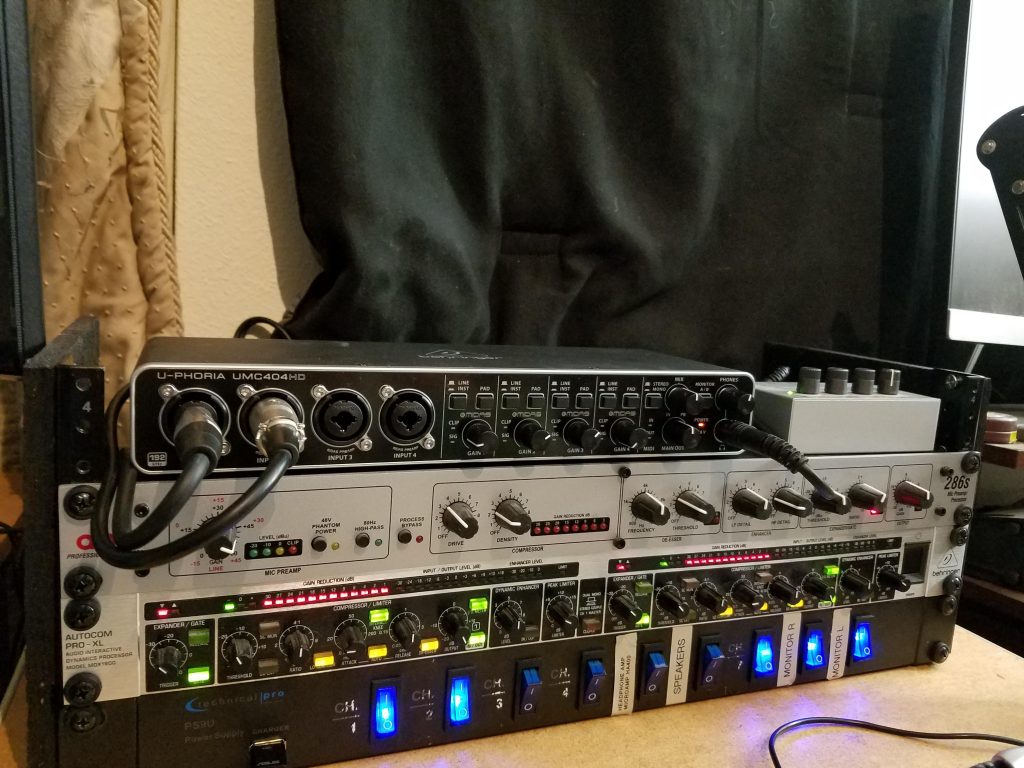 It would make them laugh out loud…

Fast forward to the present day, and what we went through to multitrack anything, would be laughable to modern music technology students. Nowadays, it’s possible to make incredible quality recordings in your bedroom. And for less money, than we used to pay for a few hours worth of studio time in a decent studio years ago.

And, one of the items that is bringing us this quality at such an affordable price is the… 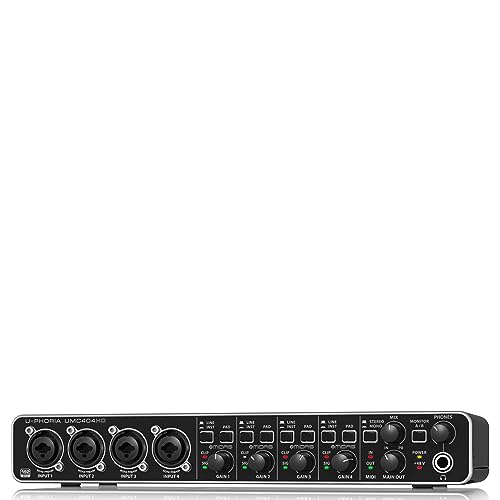 So, let’s have a look at this little recording marvel in detail and see what it has to offer…

It’s a rugged interface with its metal construction and will easily withstand quite a bit of impact. And, it’s not only for home studio recording, but it could also comfortably be used for remote location recording. As it should have no issues standing up to being transported anywhere.

The overall feel of it also strikes of quality, especially considering how affordable it is. It is, after all, designed and engineered in Germany. And manufactured in Behringer’s Chinese facility which is actually a whole town concentrated on producing products for the brand and it’s sister companies.

This is one of the reasons the company manages to maintain quality standards without having to raise the price.

As with any piece of technology, if you are not used to using an audio interface, the controls can look a little intimidating at first. Especially if it’s your first time! But, there is no need to worry; the design behind the UMC404HD is logical and straightforward and won’t take you long to get your head around.

It’s a 4 x 4 interface, meaning that it has four inputs and four outputs. And allows the transfer of audio signal, and MIDI. The audio can be used to record or process vocals, guitars, drums, or whatever? While the MIDI can be used for interfacing with MIDI keyboards and other MIDI-based facilities such as drum machines and synthesizers.

It features a stereo/mono switch, which can be used for zero-latency direct monitoring, as well as, Input/Playback control. There is also a headphone connector with a dedicated level control.

For visual monitoring, it has status, signal, and clip indicators. And, the main outputs are XLR or quarter-inch TRS connectors. These two outputs to your speakers are stereo linked. The Behringer UMC404HD also features analog inserts. These can be used for hardware external dynamics processors, such as compressors, or other external effects, like a favorite hardware reverb unit.

But, What’s Inside The Box?

In many ways, what you can’t see is equally, if not more important than what you can. The most exciting of these hidden gems is the four MIDAS designed preamps within the unit, all with +48v Phantom power.

Phantom Power is a very small electrical signal that is sent down XLR cables (standard professional microphone cables). And, is necessary to power Condenser microphones which are commonly used for recording. Especially for vocals and drum overheads.

So will your mic locker…

You may not own any condenser microphones at the moment. But as your interest grows, so will your mic locker, and a condenser or two (or many more!) will end up in there. And without Phantom Power, they will be useless. So, it’s good to have it at this early stage.

All your audio signals will go through these preamps, so luckily they are high quality, with the backing of a live mixing console legend, MIDAS, behind them. These preamps will amplify the very low-level signal produced by microphones to the higher level, which is needed to create quality low noise recordings.

Rubbish in, rubbish out…

Pre-amps are, therefore, a fundamental part of determining the quality of an interface. And with four from MIDAS, you can’t really go wrong. Interfaces with lesser quality pre-amps have a direct impact on producing a lower quality finished recording. As we say in the industry – rubbish in, rubbish out – well, we don’t quite say that, we use slightly more colorful words, but you get the meaning.

In summary, the MIDAS preamps are superb and will give your recording a quality that would just not be possible with cheaper pre-amps.

The Subject of Latency

The main issue with digital recording, which didn’t exist in the good ol’ days of going direct to tape is Latency. In simple terms, Latency is the time delay between what is being played or sung (the recorded signal) and what you actually hear (the monitored signal).

The Behringer’s Latency levels are very low; in fact, almost zero. This makes it easy to record with and gives great results without any timing issues.

Up to 192kHz resolution…

The downside of this is that it will take a very powerful computer to run at that resolution. Plus, the file sizes would be ridiculously large, and you wouldn’t be able to record four channels at once. But, even though it’s unlikely that you will ever record at 192kHz, it’s still nice to know that you could, should the need ever arise.

The majority of professional engineers record at 44.1kHz (CD standard) or 48kHz (Broadcast standard). With more and more recording at double those rates, 88.2kHz, and 96kHz.

But, very few engineers record at higher rates; in fact, it’s only jazz and classical that has been recorded at these very high rates. This is because the whole orchestra or ensemble tends to be recorded together at the same time. This uses far fewer microphones (and obviously the pre-amps that take their signals) than you would use for an average pop recording session.

We should also add that included in the bundle with this interface are 150 instrument or effects plug-ins that are downloadable to use with your favorite DAW (Digital Audio Workstation).

While on the subject of DAW’s, an audio interface really wouldn’t be much use unless it was compatible with the DAW’s you intend using it with.

This Behringer interface is compatible with all the most commonly used recording software. This includes Pro Tools, Logic, Ableton, Cubase, Steinberg, etc. etc. And, for Mac users, it is also compatible with Garageband, which is provided free on all Apple Macs.

In terms of operating systems, it works with Mac OSX or Windows XP or later. So, you should have no compatibility issues on any level.

So, What Do We Think of The Behringer UMC404HD 4-channel Interface?

When you first start home or small studio recording, it is an exciting time. And, every day brings new things to learn and master. But, after the honeymoon period is over, you realize that the quality of the sound you create is fully dependant on how good the equipment you use is. And this, in particular, applies to the audio interface.

It is absolutely vital, every audio signal you record goes through it. And, if it lets you down, you will never produce great sounding recordings. And Behringer are aware of that!

An interface that will work with you…

With the Behringer UMC404HD, the company have put a lot of effort and thought into producing an interface that will work with you, not against you. An interface that can produce great sounds and do it easily. The fact that they chose to use four MIDAS preamps is one such example. It shows that Behringer wants to produce the best possible products at the best possible price.

It also features enough inputs and outputs to allow multiple instruments to be recorded at the same time. You could even record a drum kit using, for example, the Glyn Johns technique. This is not always the case with audio interfaces in this price range.

Latency can also be a big problem, but not with this. Its latency-free monitoring allows effortless recording. They really have thought of everything possible for the price.

Would We Buy A Behringer UMC404HD 4-channel Audio Interface?

Of course, we would. It’s a quality product and has everything you need to record great sounds. There are better audio interfaces available, but they cost a lot more. And, they do sound better, it has to be said. But, they sound 20% better for 3 or 4 times the price.

If money is no object, then go ahead and spend more, but for the money the Behringer is incredible. If you enjoy recording you will eventually upgrade to a more expensive, higher quality interface, plus buy separate pre-amps, etc. with time anyway. But, as a starter interface or an upgrade from a single or two-channel interface, this is an excellent choice and an absolute bargain.

The Behringer UMC404HD Audio Interface is an excellent product which does exactly what you want it to and more. And, considering the price, we don’t think there is a better option available, without spending quite a bit more.