The subject of our review today is one of Casio’s line of compact grand pianos, the Casio CGP-700BK.

Now, what should you expect from Casio’s series of compact grands?

There’s more to find out about the Casio CGP-700BK but you won’t find out if you don’t dive in. So, take a dive with us! 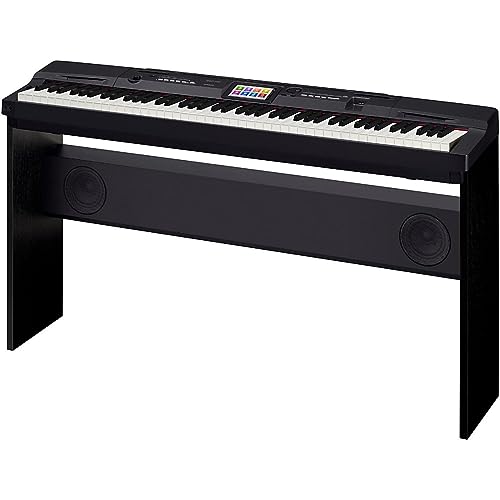 Features Of The Casio CGP-700BK 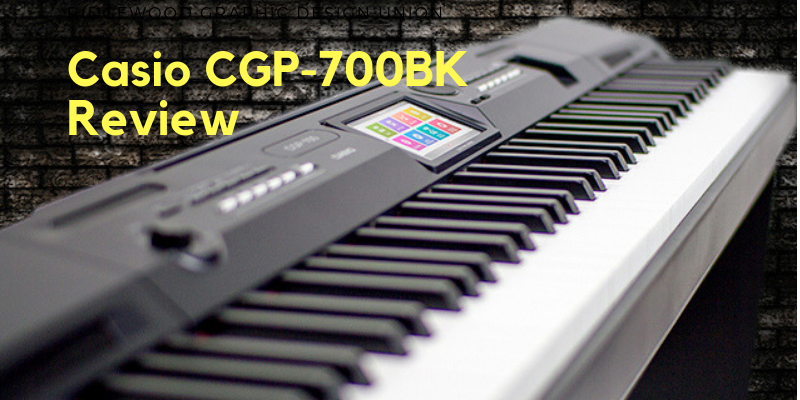 The Casio CGP-700BK is one of Casio’s compact pianos. And comes supplied with an ingenious stand, but more on that soon…

It’s only available in a black finish but the piano looks very professional and modern all the same.

Now, let’s take a closer look at the stand because it’s a large part, not only, of the looks of the piano, but of the overall performance.

Apart from obviously giving the keyboard support, the stand also comes with built-in speakers. The piano itself has four onboard speakers, the stand features an extra two larger speakers.

So, if you’re playing to a bigger crowd, you can position the stand so that the speakers face the audience.

Now, if you’re a traveling musician and you need your piano on the go, then, of course, you can get the Casio CGP-700BK without the stand. It weighs about 26 pounds, which is about the average weight for most portable keyboards.

And since it is compact, it makes carrying it more convenient. As well as, allowing the piano to fit into even smaller spaces on stage.

The user interface of the Casio CGP-700BK impresses us a lot with its very friendly layout. It makes function navigation fast and intuitive.

Whatever it is you need to select – from rhythms, to tones, to sound effects… Or if you just want to record your performance, or change a setting, you hardly have to do anything more than tap a few buttons.

Another thing we love about the interface of this piano is that it comes with a display. It’s a 5.3-inch color touchscreen! That of course, takes interaction with the Casio CGP-700BK to a whole new level.

The display shows your current settings and helps with the lesson function as well. As we all know, seeing what we’re being taught, goes a long way to helping us understand it.

In all, the number of buttons on the Casio CGP-700BK comes to 27. The buttons are small and sophisticated-looking. And in addition to them, you’ll also find a pitch bend wheel as well as a volume knob, of course.

This interface is easily one of the friendliest we’ve seen on any piano.

The Casio CGP-700BK comes with 88 fully weighted keys. And yeah, they are full sized too like those of an acoustic piano. The action used here, is, of course, Casio’s world-famous Tri-Sensor Scaled Hammer Action Keyboard II.

Let’s stay on the action a little bit, shall we?

Here, Casio uses a springless hammer system. What does that mean? Well, it means that Casio uses actual hammers in this piano. Thus, each key is connected to one little hammer. So, when you play or strike the keys, the action of the hammer makes the piano feel like you’re playing an acoustic piano.

Now, to make things even more realistic, the hammer action is graded. If you know something about pianos, you’ll know what that means… 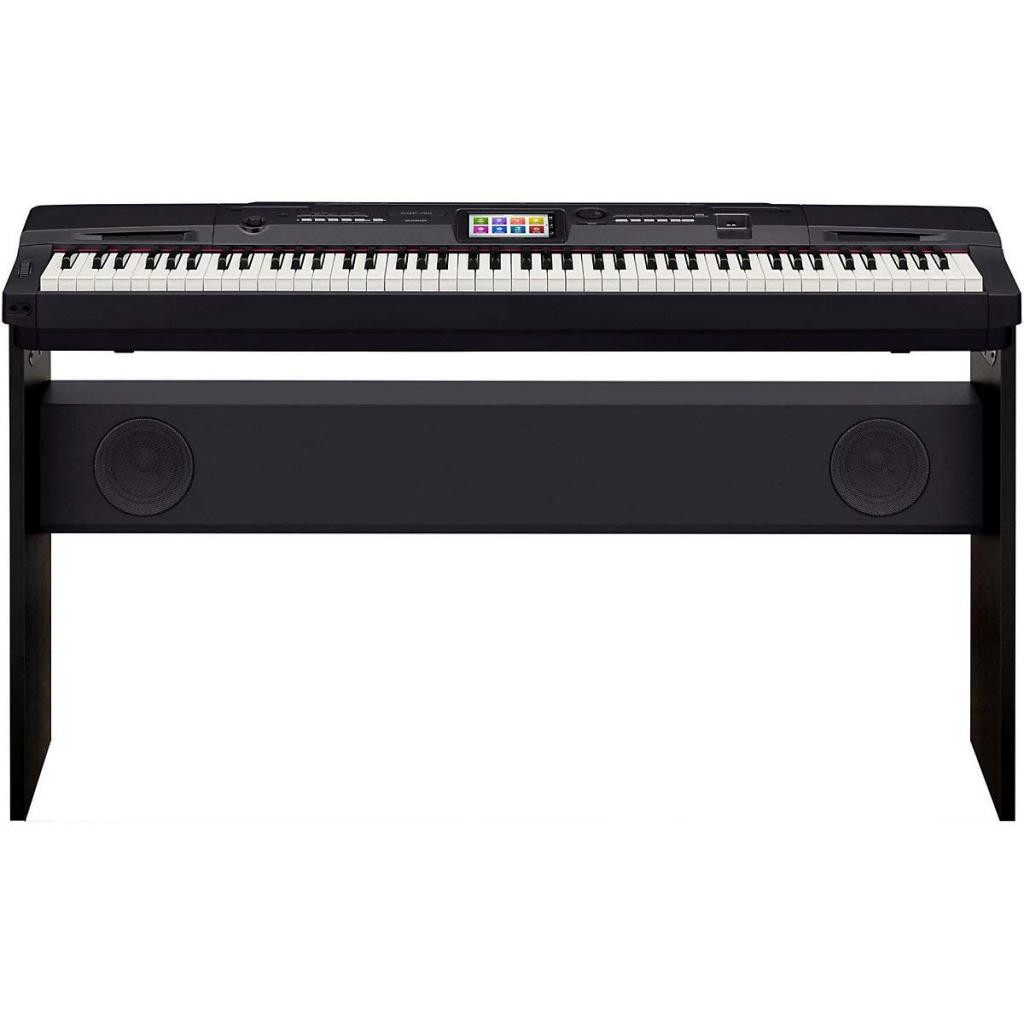 In summary, a graded hammer action is another way piano makers use to simulate the feel of an acoustic piano. Therefore, the piano feels heavier when you play the lower notes, but feels lighter when you play notes on the higher end.

Now, to the feel of the keys…

The keys actually feel amazing thanks to Casio’s choice of simulated ebony and ivory keytops. The keys are matte, not glossy, which could make your fingers slip if they start to get moist from long practice. The matte surface provides a firm grip for your fingers whatever the condition.

Casio did not use its AiR sound generation technology on this piano. Instead, it chose to use the MXi sound engine. By the way, MXi is short for Multi-Expressive Integrated.

Well, the MXi offers a vast array of diverse sounds, rhythms, sound effects, styles, and lots more. But to be honest, it isn’t as good as the AiR when it comes to the quality of the piano sounds it produces. 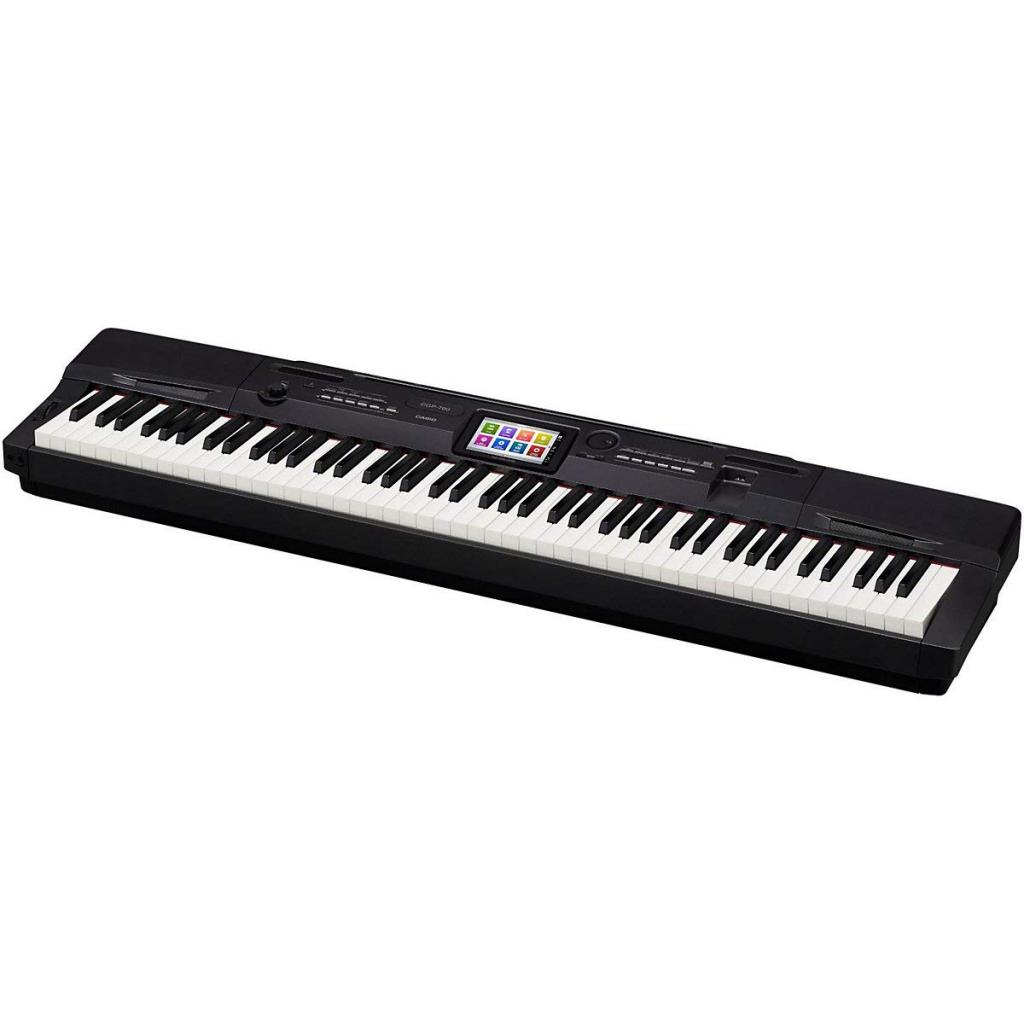 On some versions of the AiR sound engine, you can get features like a string resonance simulator, linear morphing, key-off simulator, and others. These features usually help to make the piano sound less digital and more natural.

You won’t get any of these on the MXi sound engine.

Anyway… The sound from the Casio CGP-700Bk is pretty impressive. That comes as no surprise since Casio obtained the high-quality sound samples on the piano from its 9 feet long concert grand piano.

Now, besides the 28 piano sounds you get from the Casio CGP-700BK, you’ll also get the following sounds. The total number adding up to 550 instrument sounds in all. 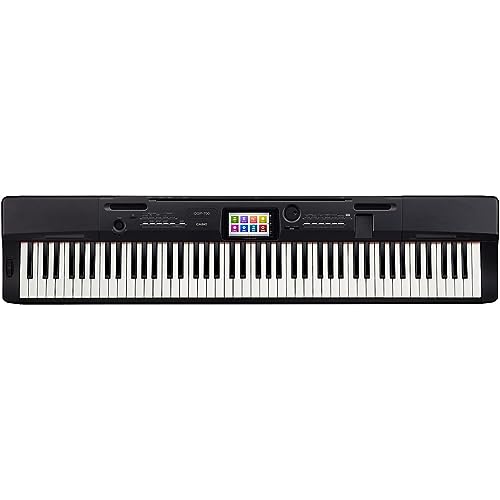 But, what could be better than having 550 quality instrument sounds available under your fingertips?

The answer is, having more than enough sound effect types to customize them and create unique sounds to your personal tastes.

Here are the sound effects you’ll find on the Casio CGP-700BK.

And then there’s the pitch bend wheel. Which allows you to achieve some really cool effects. For instance, you can achieve a choking effect or a guitar vibrato.

Of course, the aforementioned are just added bonuses to what the wheel normally does, which is to lower or raise the pitch of the notes you’re currently playing.

Casio gives us a 40W speaker system here. With that much power, there’s no doubt whatsoever that the sound you’ll get from this keyboard is rich and powerful.

We mentioned earlier that the stand of this keyboard also comes with its own speakers. Actually, the 4 speakers on the piano itself are 3 Watts each. But the ones on the stand are about 14 Watts each.

As you would expect, this piano doesn’t sound as good without its stand. But if you’re only performing to a small audience, it will still be fine.

The maximum polyphony is 128 notes, which is common with pianos at this price point. It will more than suffice for many complex pieces.

However, it still has its limitations. But unless you’re pro level classical pianist, 128 note polyphony should do for most of the pieces, you’ll ever enjoy playing.

The Casio CGP-700BK is a delightful and highly versatile instrument. It works as a great piano choice for gigs, or as an excellent piano for your home. And with lots of sounds, sound effects and other features to play around with, we find the piano quite inspiring.

All in all, the Casio CGP-700BK does very well in our books. And we will definitely recommend it to anyone wishing to learn the piano or wants to have a good instrument on which to perform.