The Casio PX-870 has become the flagship piano in Casio’s Privia PX series having replaced the PX-860. We are excited to review this piano with you and help you see this instrument just as it is, i.e. its good and bad sides.

If you still share the sentiment that Casio makes toy keyboards, then you probably aren’t quite up to date with the Casio brand. The brand has released some pretty interesting and impressive models and the PX-870 is just one of the many.

However, not all keyboards are for all pianists, and manufacturers make their keyboards with different customers and customer groups in mind. So, will the Casio PX-870 be a compatible keyboard for you? You’ll just have to keep reading to find out.

But if you’re in too much of a hurry to go through our detailed review, here’s the bottom line. 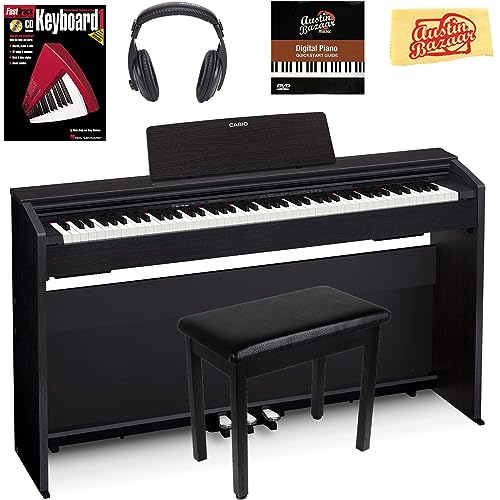 Bottom Line For Those In A Hurry

First question, who is the Casio PX-870 for?

The Casio PX-870 should work for any musician with any minimum level of piano skill, i.e. from beginner to pro player. However, only go for this if you’re looking for an instrument that’s strictly piano.

Why do we say this?

We are saying this because this model does not come with loads of sounds, accompaniment patterns and rhythms like you’d find in other keyboards. So, it might not be the thing you’re looking for in terms of creating music.

However, this is fantastic for piano playing. And Casio brought in a lot of improvements to the immediate past model to the PX-870.

From a 4-layer piano sound, brand new speakers, 256-note max polyphony, as well as ivory/ebony keytops, this is the closest you can get to an acoustic piano at this price point from Casio.

Alright, for those who have the time, here’s the full review below…

Features Of The Casio PX-870

Design – Elegant But Not Portable

Although in Casio’s Privia series, the Casio PX-870 isn’t exactly portable. In fact, it is a furniture-style piano. It comes with 88 keys just like a full-fledged keyboard. Plus, it also comes with 3 piano pedals as well.

With its design, the Casio PX-870 easily works as a home piano. And although it is furniture-style, it is still quite compact that it doesn’t require so much space like an actual acoustic. Also, it looks really stylish so it’s definitely going to add to your living space.

But then again, the keyboard is actually quite heavy. So, it’s not something you want to move around willy-nilly. It actually weighs up to 75 pounds and that’s quite heavy as you can see.

Alright, now to another matter concerning the design of this keyboard…

You’ll get your keyboard in a very large box. And this large box will contain all the parts of the instrument which you’re supposed to assemble. 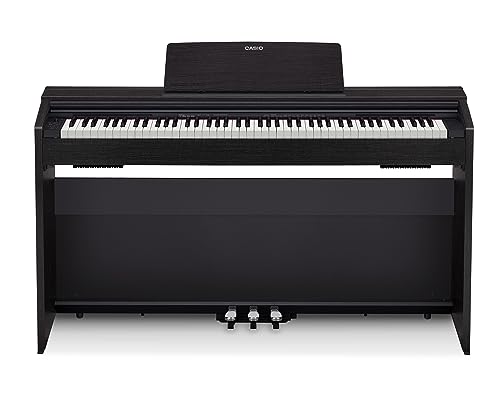 Thankfully, this makes very easy assemblage. The only tool you’ll need to put the parts together is a screwdriver. And the whole shebang shouldn’t take more than 45 minutes at the most.

Now while you can totally pull of assembling the entire keyboard yourself, you’ll probably be better off doing this with some help. The box weighs about 100 pounds. This thing ain’t joking, guys. So, if you can, do get some help.

Furthermore, as part of the design of this keyboard, you’ll also find 3 piano pedals which include the sustain, sostenuto and soft pedals. Of course, the sustain pedal also supports the half-pedal function as well. And this is just another way the PX-870 resembles an acoustic piano.

And lastly, this comes with a cabinet of fine fiberboard which gives an elegant wooden texture.

Interface – Simple But No Display

The interface of the Casio PX-870 is quite simple and easy to navigate. There are about 8 buttons which you can use to access the main sounds on the keyboard like the piano and the electric piano. But it’s not just the sounds, the buttons also help you access other functions like the metronome and recording functions. And then, there’s master volume knob, of course.

And to make the interface even easier for you to navigate, each button comes with its own labels. However though, there’s still a small ish we noticed with the interface and that is the fact that this does not come with a display of any sort.

It’s a bit of a downer for us, of course. But this comes with beep sounds which tell you which option you have selected and are currently on. According to option you select, you could hear 1, 2, 3, or 4 beeps.

The Casio PX-870 comes with a really impressive sound and an improvement over previous Privia series. And what’s the improvement? Well, it comes with a 4-layer piano tone. And it does sound absolutely fantastic.

The tone sounds rich, and smooth with a really natural decay. This makes this instrument quite interesting and pleasurable to play.

Of course, this comes with Casio’s world famous sound engine – the Multi-dimensional Morphing AiR Sound Source. The samples which provide the beautiful tone on this piano are obtained from a grand piano, 9 feet long. 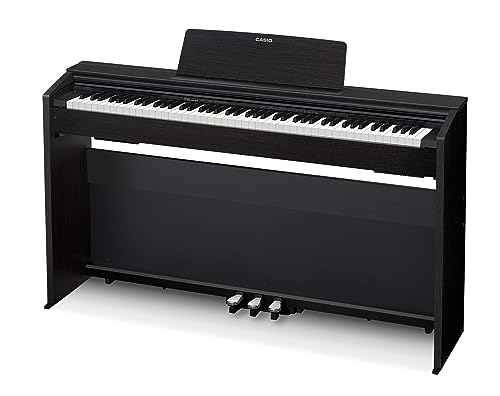 Plus, this piano comes with a larger memory capacity with lossless audio compression. This allows the piano to sound even richer with sharper accuracy. And by sharper accuracy, we mean that you’ll get a pretty natural note decay, resonance, and strings.

Built-In Tones And Sound Effects  – Quite Authentic And Impressive Respectively

Just like we mentioned in the Bottom Line section, the Casio PX-870 does not come with a lot of sounds. So, on the PX-870, you’ll find only 19 built-in tones in total. And each of them sounds quite authentic.

Now, even though this uses the same AiR sound source that other pianos from Casio also carry, this is even more exceptional. How so? Well, it carries some features that other pianos in the PX series like the PX-160 and PX-770 do not offer.

One of such features is the String Resonance System. This is a system that simulates a resonance effect for each of the 88 keys on the Casio PX-870.

So what’s this String Resonance system all about? Well, when you play a regular acoustic piano, the sound you get doesn’t just come from the keys you play alone. There are other features that affect the sound as well which are the strings. When they resonate, they give the sound more fullness and richness. 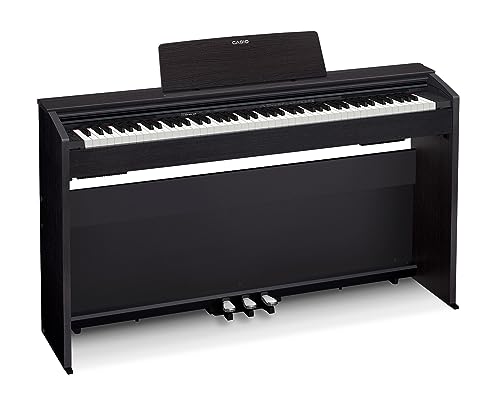 So, that’s what the String Resonance system does for you on the Casio PX-870. And even more, you can even adjust the strings effect the way you want too. There’s the suppressed and slightly suppressed. And then there’s the reverberation and the strong reverberation as well.

One other unique feature of this piano is its Lid Simulator. The Lid Simulator simulates the sound effects you usually get when closing or opening an acoustic piano’s lid. This features also comes in 4 settings which are Lid closed, Lid fully open, Lid opened slightly, Lid removed.

Other interesting effects on the Casio PX-870 include the Key-Off Simulator, Hammer Response, plus a Hall Simulator effect.

We’ve already mentioned that this comes with 88 full-sized piano keys. And these keys are supported by Casio’s Tri-sensor Scaled Hammer Action Keyboard II.

So, yes, this does mean that Casio uses actual hammers inside the keyboard to create a touch, response, and feel close to what you find on an acoustic piano. The weight of the keys actually does feel pretty nicely weighted too.

As for the triple sensor, it’s what makes the response of the keys great and responsive.

Furthermore, the keyboard of the PX-870 comes graded. And this means that your keyboard is going to feel a lot heavier on the bass ends than it feels on the treble end when you play. 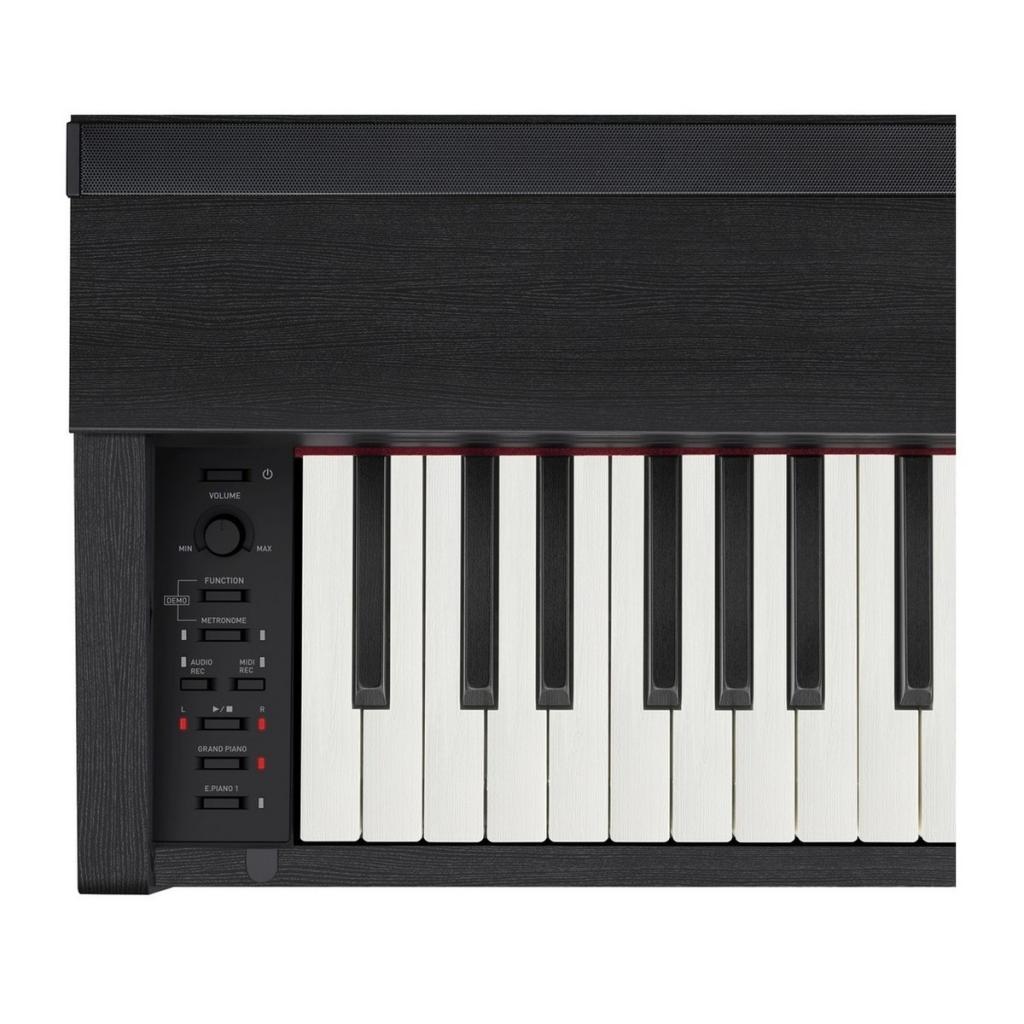 Now finally, about the keys, they are also quite touch-sensitive. And there are 3 settings you can pick from – hard, soft and medium.

The hard setting will actually give you your most versatile response. So, basically, there will be a world of difference between when you play the keys hard and when you play them soft. This is quite different from the soft setting that does not give much of a difference in the sound response.

The medium though is the compromise between the soft and the hard. And it’s also probably the most natural of the three settings.

But also, if you don’t want the whole touch sensitivity thing altogether, you can also turn it off completely.

For those who need more specific details on the Casio PX-870, here are the specs below…

This is a fantastic keyboard for those looking for a digital piano that gives them a close enough acoustic experience. At this price point and from Casio, you can hardly get better.

It is a much more advanced keyboard than the PX-860 with many features that both beginners and advanced players will surely enjoy.

However, if you’re looking for an instrument that inspires you to create music, this is not the one. The built-in tones aren’t many and there aren’t many accompaniment patterns, rhythms or even a large sized recorder.

So, if those bells and whistles matter so much to you, you might have to check out other keyboards like the Yamaha DGX-660.

But altogether, the Casio PX-870 is a highly impressive instrument.