In our younger days, Casio meant budget-priced watches and calculators. They had something different, and we would play with what is today very basic functions on our watches for hours. Casio was just there, and we didn’t even think where they had come from.

Amid an impoverished nation at the end of the second world war arose a man and his brothers, who set up a company that was unsure of where it would go. By chance, they attended a Business Show in Tokyo in 1949 and saw the first electronic calculators. The light of creativity came on, and having some knowledge of electronics, they plowed what money they had into producing what they hoped would be the first calculator using solenoids.

Until that time there were calculators, but you had to turn and crank handles or use motors — the original adding machines.

The company is born…

A desk size calculator came from that and some clever innovations. And the Casio Computer Co came into existence in 1957. Anything electronic they designed and built and gave the inspiration to others to try new things. Of course, it didn’t take long to see that there was a growing industry in budget-priced musical instruments. 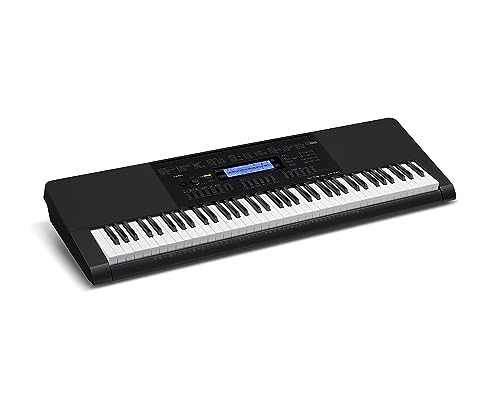 This was especially true with regard to small keyboards that many considered just toys. Some of them were, but they introduced a whole generation to the idea they could make music.

Today they continue to make just about everything it seems. But it is the digital pianos we are interested in. As per-Casio, they are entry-level and budget-priced, and even their top ranges come nowhere near the cost of some of their competitors. They certainly fill a niche in the market, but how good are they? Do they really sound and play ok?

To some extent, the WK245 is a leap in the dark. Casio is more known for manufacturing smaller size instruments, like 49 or 61 key pianos. So if you are a Casio user and fan this might seem enormous to you. The 76 keys are going to take you from what might be a small, almost toy-like piano to an instrument that is nearly as large as the real thing.

If you have a child or a family member who has the smaller versions and really wants to learn properly. Then you don’t need to look much further than the WK-245. It’s all in there and so much more. As we will see, it is actually much more than just a piano, and there is a mountain of features included. 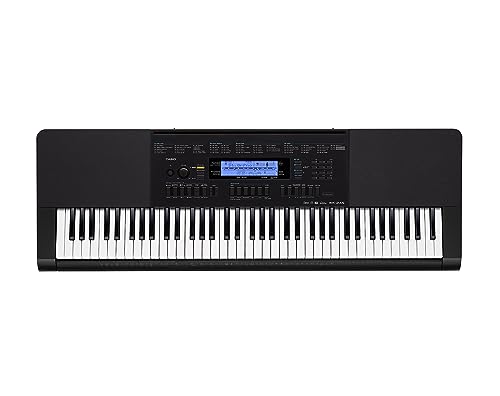 It is a nicely constructed piano, made from quite a tough plastic. It will take a few knocks though we don’t suggest you put it to the test. The design of the body has included rounded edges at the front corners and below the keys. This gives it a nice smooth, comfortable feeling.

There are no clever construction innovations, and there don’t need to be. It is a simple and functional design that allows you to place it anywhere for use. 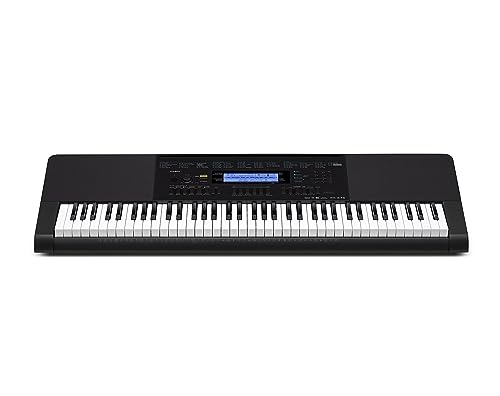 The keys are made of plastic which some may not like. But as we go through this review, let us keep in mind this is a budget-priced entry-level piano. There will not be materials and facilities that you will get on a similar instrument unless it has another zero behind the price. With that in mind, plastic keys are fine, and we will look at how they actually play.

The WK-245 is about average size for what it is at 50 by 7 by 18 inches deep, so it is quite manageable and even portable, though it is quite heavy at just over 23 pounds. The layout looks complex, but it is well-positioned and easy to read and is largely self-explanatory. And it is designed to run on batteries (6), or AC power.

The center of attraction is the centrally placed LCD backlit display. This provides you with all the current status information and what’s currently being used in an easy to read style even in dark lighting. This display also includes the music notation.

That is probably the least you would expect from a Casio keyboard, remembering our watches that lit up in the dark all those years ago. But that’s not all. We will have a look at some of the extra Casio technical options soon.

To a certain extent, it plays how you might expect. It is aimed at the beginner player. And so you are not going to get a professional concert player feel from the keys, It has 76 keys that are touch-responsive. Touch responsive means that the harder you strike the key, the louder the volume.

The keys are ⅞” wide, and Casio has not done what some budget manufacturers do and reduce the key width down to ¾.” These keys feel like the real thing width-wise. One of the real assets of this keyboard is that the keys are pressure-based. Therefore, they react to how hard or soft you strike them. For this level of piano, that is a good feature. 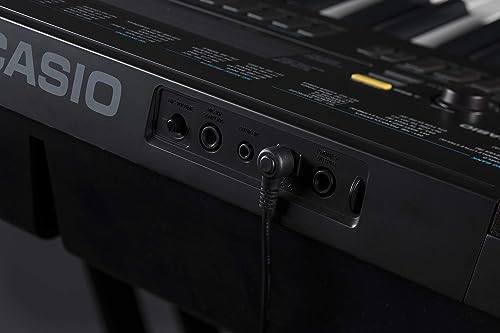 The keys are not weighted, but they have a very even touch. And while they are not hammer graded, they feel reasonably good as you play. Both Layering and Split functions are included. So you can have two instruments playing or split the keyboard into two for teaching purposes.

As a piano to play, it has a basic style and feel. It is not a concert grand. But for the price, it is an excellent keyboard that plays very nicely and is perfect for a beginner.

To describe the sound, you really have to delve into the sound features that have been included. As a stand-alone piano, it sounds adequate. Through the onboard speakers, it is not particularly impressive because of the quality of the amp and speakers that are built-in, which you cannot expect to be of the highest quality.

However, if you connect to one of the best keyboard amplifiers, then you will find that the quality of this piano is very good. Of course, it doesn’t carry the richness and warmth of more expensive models. But it is surprisingly lifelike in its sound and is not going to disappoint.

It offers a polyphony of only 48 notes. But we must remember that this piano is designed for the beginner player and we do not expect them to be starting to play Liszt’s, ‘La Campanella’ just yet. Forty-eight notes will be enough to avoid dropouts on any reasonably complex piece, classical or contemporary.

However, the piano is just a small part of the story where this keyboard is concerned…

Lurking in the depths of its memory are six hundred different sounds. These are in a variety of genres and styles including a range of stereo grand pianos and just about everything else, including orchestral strings. Also built-in are 180 different rhythms in just about every style you can imagine. It’s a bit like having your own band to back you when you need them.

The sounds of all these options, as mentioned, through the onboard amp and speakers are acceptable and perfectly suitable to learn or practice with. If however, you really want to hear the quality of these tones, then an external amp would be a good idea. Though it is not needed necessarily.

If all that wasn’t enough, there is more…

An onboard recorder that will give you the ability to record five songs and six tracks. A sound sampling feature that creates and saves your own sounds. There is also an onboard microphone that will let you record vocals. As well as an audio input to add further bass or guitar sounds, percussion or extra synths.

Whatever you need to do, the options are here. The keyboard moves from being a piano to an extra set of musicians to play with and then into a recording studio. And when you have finished recording the basics of your song, there are some onboard effects that you can apply to improve the sounds. 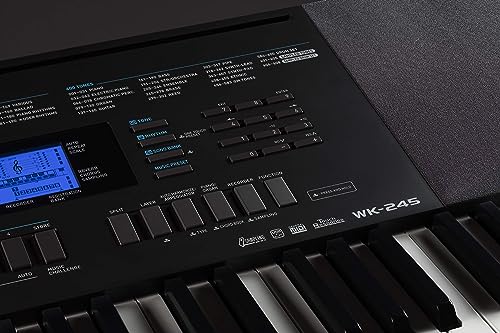 Easy to learn on…

To aid the development of a student or new players, there are 152 songs built-in with lessons that are graded as you improve.

This isn’t just a keyboard; it is a complete workstation!

Casio has also recognized the need for external connection. Therefore, they have included a USB MIDI port for connection to a Windows or Mac computer without the need for drivers.

Modern Casio digital pianos are representative of the Casio we remember from days past with our watches and calculators. Full of stuff to work and play with, none of it earth-shatteringly good, but all of it is good quality. And it worked well and at a very attractive price.

So it is with this keyboard. They have included so many extras you hardly know where to start. One thing they have managed to achieve, unlike a lot of their competitors, is to understand the basic requirements of the new player, the beginner. That is that learning an instrument is hard at first, and even when you are a few months or even years into it. Especially a piano. This makes it one of the best digital pianos for beginners currently available.

Students can become bored very quickly, frustrated at their perceived lack of progress. The trick for a teacher is to keep them at it. And for that, there needs to be an interest factor and a reason to play other than just learning.

This keyboard encompasses more elements of interest, more things to try out that are new, and more reasons to just turn it on and play with it, than most of its competitors put together. As an instrument for a beginner, it is excellent. But as they improve, it gets better with them with its recording options and varied sounds and rhythms they can experiment with.

It is quite simply an excellent keyboard and for the price a staggering good digital piano.