Since their inception in 1996, Edifier has made rapid strides to achieve a recognition for producing quality speakers that is now world-wide. Now based in Beijing, China, they originally started up in Canada in 1974 where the first speakers were manufactured. Their formal foundation came in 1996, and their production center in Beijing opened in 1998.

It then took them just one year to establish a reputation that has since grown. And included the manufacture of not only speaker systems but headphones and music systems for home use. They now employ over 3000 people worldwide.

They have had several bookshelf speaker designs including the respected R1000DB model, and its follow-up the R2000DB. Today we are going to look at a newer model in this Edifier R1700BT Review.

One thing we will say is that the Edifier range of speakers will not appeal to everyone visually. If you are looking for smooth lines, a simplistic design or an elegant appearance that is understated, these are not going to be on your shopping list. With the front grilles on they are very similar to a lot of other speakers. But take the grilles off, and they become somehow mean and aggressive.

We are not sure whether the designers were after that look, but it appears to us that is what they achieved. In some environments, they are going to look the part. But in others, they might look a little out of place, and it will be time to put the grilles on. We actually quite like them with the grilles on. 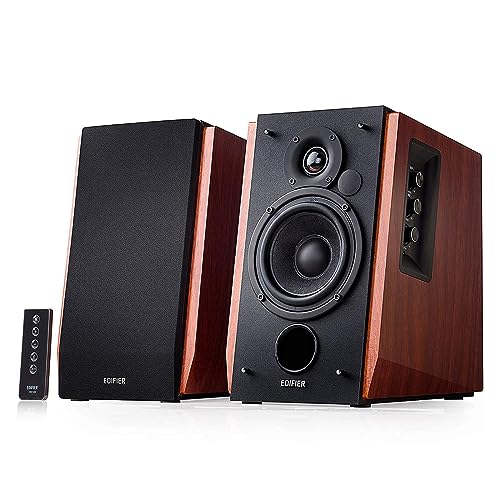 Manufactured from high-quality MDF fiberboard, they are well-constructed and have a strong and sturdy feel to them. They are not oversized at 8.4 by 9.1 by 9.9 inches and so will comfortably fit the bookshelf they were designed for. Weight isn’t a problem either at 14.5 pounds each.

They have been given an attractive walnut wood finish in vinyl that gives a very classical style to them. The black design of the baffle and the controls contrast nicely with the finish of the vinyl. Efforts have clearly been made to ensure they will fit into the decor in most homes. 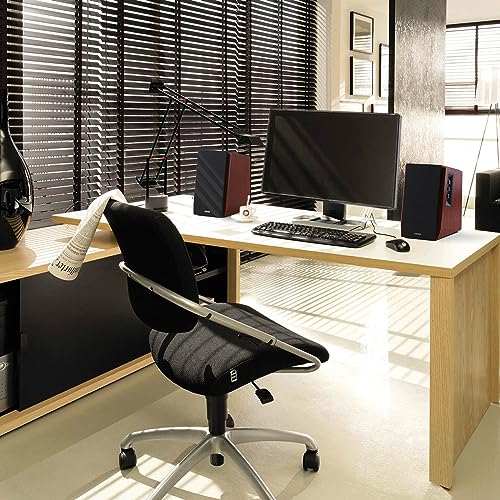 Directs the sound towards you…

As with many speakers by Edifier, there is an upward slant of the speaker design that is designed to push the sound towards the listener. The most used controls are placed in a recess on the right-hand side speaker. We think that is a nice idea as they are easy to locate but also not cluttering up the front of the speaker. Being recessed, they also not noticeable.

Other controls are located on the back. More on this later…

For the price than a solid build with some nice features. And they are easily one of the best powered speakers currently available, especially considering their low price.

Considering these are very much a budget-priced speaker the sound is remarkably good. They have a smooth sound that is missing the shattering peaks of high frequencies that budget speakers can often give. However, they can be rather shrill when the volume is set high. But it’s on rare occasions and not really an issue.

The Low frequencies are powerful, and the bass comes through quite strongly. It can be a little too dominant at times, and care needs to be taken so that it does not smother the mids. 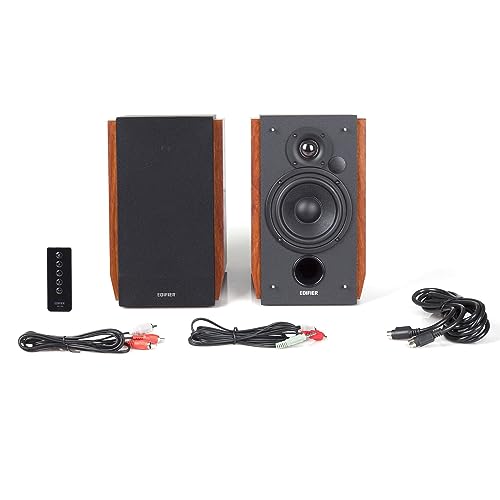 Mids are rich in texture…

It is here in the middle frequency ranges that the speakers score points heavily. This can be a vital area in the sound of any speaker. It is the band that contains the vocals, and it is an area that sometimes seems to be overlooked and under-estimated by manufacturers. Not with these speakers. The mids are strong and rich in texture and are at the front of the sound.

Driving the sound, a four-inch driver and a 19mm tweeter. There is also a front-facing bass port as against being at the rear.

All about speaker ports…

This is always an interesting argument among speaker enthusiasts. The reality is that with the best bookshelf speakers, there is a tendency is to place the speaker too close to the wall. If it has a rear facing port, this will affect the sound. It will affect how the port works through its design and thus change the sound it produces. A rear-firing bass port with no obstructions is the best arrangement if you have a port at the back.

There is another aspect to this in that if you take a front-ported speaker and place that close to a wall you will still hear a difference, especially if the speakers are near a corner of the room, though the differences are heard in a different way.

If you are to place your speakers near a wall, then a front-facing bass port is probably the best option. And given the design parameters of the R1700, that may be what the designers were considering by putting the port at the front.

The sound, as we said, is remarkably good. But if we were to find something to question, it is that the power rating is only 30 watts RMS, 60 watts peak, which for the size of the cabinet does not seem very much.

Let’s go back and take a look at the controls…

We have already mentioned those on the side of the right-hand speaker. These rotating knob controls are for treble and bass adjustments and volume control. This volume control has a few interesting operations. When you turn the speakers on it will set itself to a comfortable level to commence.

And it also controls the Bluetooth pairing by pushing and holding it down. The push-in option will allow you to select an input source. 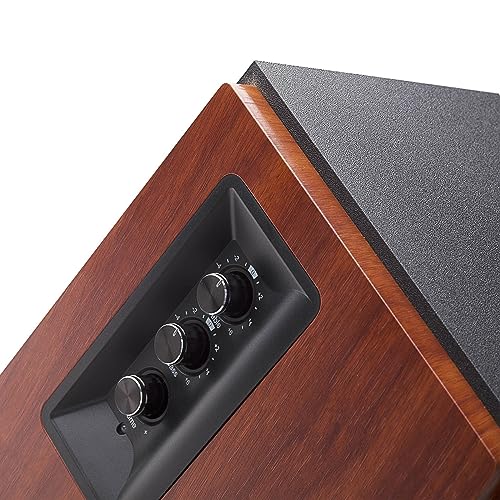 Two is better than one…

On the back panel, nothing too dramatic. A power switch and a connector to the other passive speaker. Two sets of RCA inputs complete the rear panel. These will connect to a device using a 3.5mm output. Having two sets of inputs allows you to connect to two different external sources at the same time without unplugging the other.

As an added extra the speakers come with a small remote control which has a limited operation. But is still useful for changing the volume, muting the sound or selecting an input source. It is quite, shall we say, compact so be careful not to lose it or let the dog swallow it.

The R1700 has Bluetooth connectivity so you can pair up your computer, phone or tablet and is operable with any IOS, Android, Windows or Mac system. We have already discussed the basic controls which are located using the volume control on the side of the right speaker cabinet.

So often we see speakers and other equipment that give you operational alternatives and then not provide you with the cabling to utilize them. Expecting you to go out and buy what extras are needed.

What a nice change then that Edifier provides you will all the cables. Included are a four foot RCA to RCA cable and also a 3.5mm cable, which is also four feet long. Speaker cabling of sixteen feet to connect the speakers is also included so when it comes out of the box, just some simple connections and you’re ready to go.

When a new company comes along and challenges existing manufacturers, it is a shot in the arm and in many ways a breath of fresh air. It encourages everyone to look at what they do and ask ‘can we be better?’

Edifier has been one of the companies that have done that. They have produced in the R1700BT, a very good speaker at a very affordable price. And it shows that you haven’t got to cut too many corners to produce a cost-effective quality product.

At the price point, they have set they are in the market with some serious competition, but they have emerged with one of the best speakers at the price that there is. 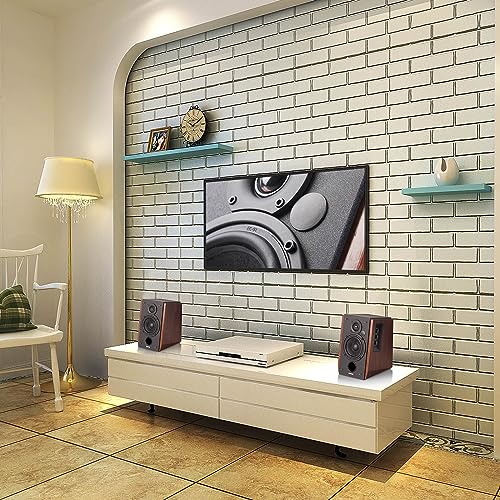 So what are the good and bad points? Let’s deal with the bad first.

We don’t think there are that many. The high frequencies are a bit weak and thin at the very top end when the volume is applied a little is one thing. But it isn’t a reason to not be interested in them. They are budget speakers, after all, and are most definitely the best bookshelf speakers under 1000 dollars. But they were not intended to be.

The bass and lower frequencies do let the speakers down a little. They do boom out a bit, and this gets worse as the volume goes up, so that needs to be controlled. And as we mentioned, the output rating seems a little low considering the size of the cabinets.

However, if you are looking to buy a set of budget speakers, we don’t think any of those things are a reason not to consider the R1700 BT.

What about the good things?

They really do have a very good mid-range sound. It is warm and articulate and easy to listen to and fortunately isn’t interfered with by what is going on above or below. The build quality is good and sturdy and has a very nice finish that makes them attractive. We would prefer them with the speaker grilles on, rather than off, but that is a personal thing.

They have front-loaded bass ports which allow them to be set on a bookshelf and the back can be placed close to the wall without interfering with the sound.

Lastly, but by no means least of the plus points, is the price. If you could find us a better sounding speaker system for the money, we’d like to hear them.

They are a very good speaker that is well-made and at the price, excellent value for money.

The Edifier R1700BT is another good addition to the excellent Edifier range of bookshelf speakers.