Edifier first set up its business to design, manufacture, and market its speakers in 1974 in Canada. They decided to move the operation to China, and in 1998 they established their production center in Beijing. They have made a big impact on audio equipment since then’ They now employ over 3000 staff and produce a range of Loudspeakers, Headphones and other audio equipment. It is for their speakers though they are really known and respected.

Their philosophy as a company has always been to produce quality equipment at a competitive price. I think we can say they do that. Innovative designs and technological advances have always been part of their vision. This pair of speakers has an advanced technology onboard.

In this Edifier S1000DB Review, we will be looking at the set of speakers and see what we think. From what we know about other Edifier products, we could be about to review some of the best bookshelf speakers currently available.

The S100DB is Edifier’s attempt to produce a set of speakers that will perform in a range of environments. They are what Edifier calls a set of bookshelf speakers. They are capable of delivering great sound as part of a home cinema set up. Also, of course, as the principal speakers for your music system. But they go a bit further than that. They are also good for gaming and for use with PCs. So how good is the build, and what is the sound quality like? 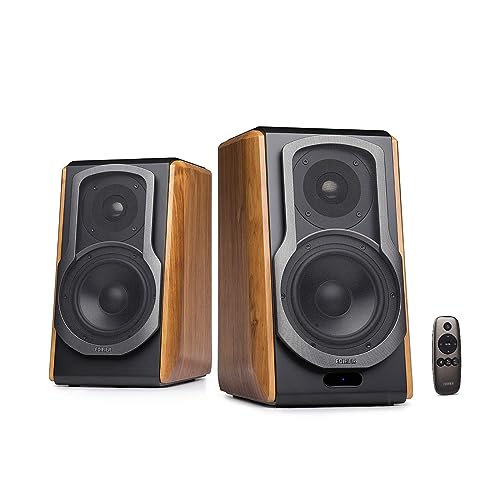 If you have seen Edifier speakers before, then you will be familiar with their design. They are simplistic yet attractive, and many of them have the same look. In fact, if you were to put a selection of the range together, you might struggle to tell them apart. They have the familiar sloping front design, which we think is rather attractive. It is certainly a change from the usual often bland designs we see. 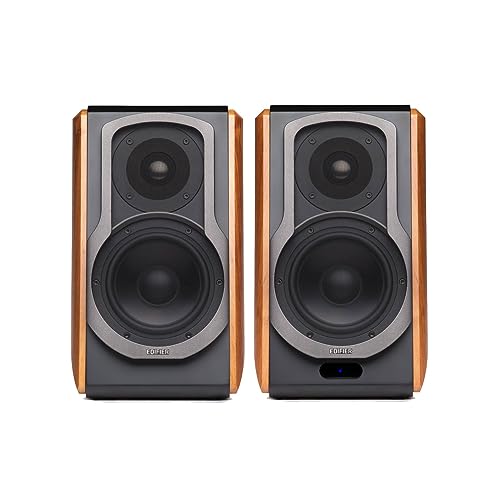 This design is sloping not just for aesthetic impact; here’s why…

Edifier considers that in giving the baffle some angle, it will increase the projection and spread of the sound. Thus improving the listener’s overall experience. We have to say we cannot argue with that one. Aesthetics, though, do play their part, and they are a striking pair of speakers.

They are constructed from a combination of materials. The top, the back, and the front are made from a composite material. The sides are constructed using MDF that is covered with a natural wood vinyl. They are ported in the rear. This means that placement is important. If they are on a bookshelf or are a wall-mounted shelf, then they cannot be too close to the wall. This will have the effect of altering the dispersal of the sound.

When you consider these are listed in the bookshelf category, then we hope your bookshelves are big and strong. They are quite big speakers at 13.3 by 11.5 by 7.9 inches. Each speaker weighs a rather heavy 18 pounds. No lightweights. There is something very impressive and reassuring in the weight of these speakers. They do not feel like they are cheaply made, which of course, they are not. The design is completed by removable front grilles.

It’s the main reason we choose our speakers, so what about the sound? When you make some price comparisons, the S1000DB seems like a pair of speakers in the budget range. As soon as you plug them in, you realize that is not the case. They are built to deliver a powerful sound.

There is a 5.5-inch woofer that gives you a big deep bass sound. But it also produces a powerful mid-range, The tweeter is a one-inch Titanium dome design. Together they utilize DSP ( Digital Sound Processing) to give you a stunning 120 watts RMS. It has a frequency range of 48Hz to 20KHz ( plus or minus 4dB). 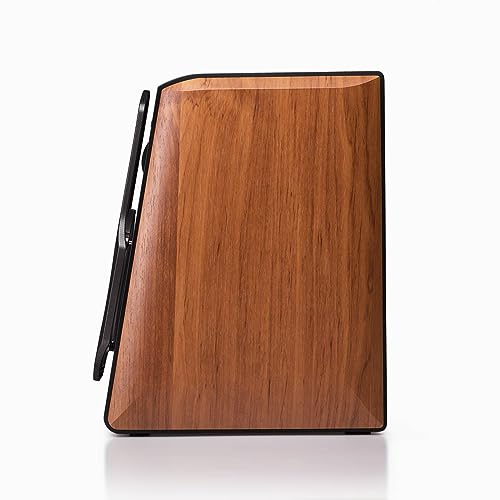 The 5.5-inch drivers give you a very low-frequency deep bass sound aided by the rear port. The tweeters delivering some crisp and clear highs. The mids though whilst not being the speaker’s strong point, are still clear and not muddy. At peak volumes, there is a case for saying that the bottom end does encroach. That, though, is only at the top end of the volume scale. At anything less than the max, the separation is good and clearly defined.

One thing is very apparent if you are planning to use these for a home cinema system. You would not have to buy a subwoofer. It would add to the overall sound, of course, but there is not a great need as there are with some speakers at a similar price point. 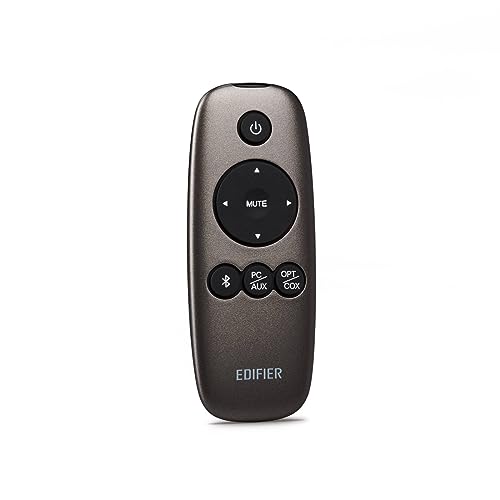 There is one point to make about these speakers straight out of the box. Speakers, when they arrive, will have been in the factory for an unknown period of time. The drivers may have stiffened up and not be as flexible as they should be to deliver optimum sound. This may make them sound lacking in any depth. The best way to deal with this is to ‘burn them in.’ This involves using them at no more than half power for about a week. They should then settle down and give you the sound you will be expecting.

Our opinion of the sound is that it is excellent for its price point. Of course, they cannot compete with speakers that are two or three times the price. But when compared to similar price speakers, they lead the field. This would make them one of the best bookshelf speakers under 500 dollars.

This is designed as an Active or Passive system. They can be connected to an amplifier if that is your choice, although, they do though, have a built-in amp. They are, therefore, Active if you want them to be and need no external amplification.

The main controls are located on the rear of the speaker. Here you will find the power button and dial controls for volume, bass, and treble. These just give you the option of adjusting the frequency levels. We wouldn’t say there were anywhere near as efficient as a built-in EQ. But they are graded and do allow a bit of controlled tweaking. 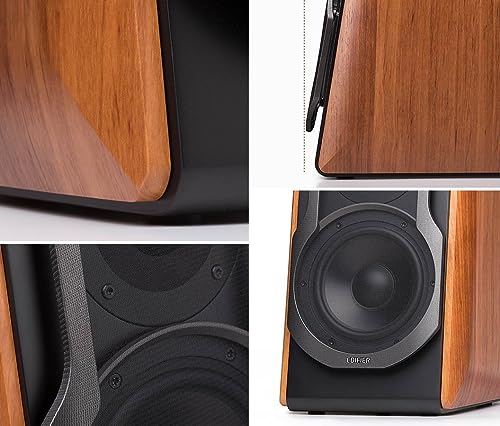 The speakers have a remote control, which gives you armchair control over the speakers. This is usually a weak point with some systems that have a similar price tag. This unit, though is built of quite substantial plastic. Controls are easy to identify and use and cover all the functions the speakers offer.

Basic but efficient controls and the addition of the Remote control is a nice extra. As the speakers are both Active and Passive, they do offer some extra options for use.

On the back panel of the speaker is a control panel with some options for connections to external sources. There are RCA and AUX sockets for connecting such items as a TV, PC, or any other compatible media. There are also Optical and Coaxial connections and inter-speaker connections with a 5-meter cable. We should point out these speakers do not have WiFi streaming. 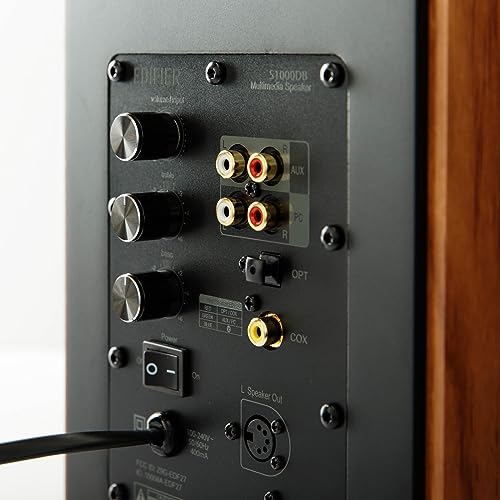 Earlier in our review, we mentioned returning to discuss some onboard advanced tech. The S1000DB has Bluetooth connectivity. Nothing much new there you might think, but this is the aptX codec system’ A more advanced version with better performance. Streaming just became a whole lot easier and more efficient and with higher quality. Signal loss is reduced, and the latency issues sometimes experienced are reduced.

But there are a few negatives…

We have already mentioned that these speakers do not have a WiFi streaming option. They also do not have an input for connecting a turntable directly — two very small negatives in the middle of a lot of positives.

Overall you have to say the performance of these speakers is very good indeed. They punch well above their weight and could easily be mistaken for a higher-priced product. The mids are quite clear, and the bass does not impinge too much. The bass itself is defined in its sound and is probably the sound highlight for its clarity.

The high end is bright and clear. Maybe a little too bright at times. The overall performance, though, is good and certainly puts them into the realm of being one of the best bookshelf speakers.

We are sure that Edifier has had to make a few cutbacks to produce these speakers at the price point. It doesn’t notice, though, unless you want to get too deep into the mechanics.

The build quality is very good, and there can be few complaints there. In fact, they are so well-built they are quite heavy, as we have mentioned. With their sloping front design, they are also a little different and quite attractive. The controls are basic but efficient. As with all bookshelf speakers where the controls are placed on the rear, they can be awkward to use manually. The remote control then becomes a very good idea.

It is in sound performance where they do very well. At the price point, they represent very good value. They are easily able to compete with speakers costing more. As we previously stated, that would make them some of the best bookshelf speakers under $500.

We think they are a good choice for the home. For music and home cinema systems, they work very well and have some useful other external connection options.

Good value and an excellent buy.