Among the most legendary and iconic electric guitars, the Les Paul holds a special place. It arrived on the scene in the 1950s to enormous fanfare. Originally made by Gibson and designed in cooperation with Les Paul himself, this electric guitar delivered a style and sound all its own.

The tone of the Les Paul is warm and full, with tons of sustain. The style and appearance of this electric guitar reflect a power and personality that caught the eyes and ears of the giants of rock n’ roll.

Used by the greats…

The list of famous musicians who spread their creativity and artistry with a Les Paul is jaw-dropping. Jimmy Page, Jerry Garcia, Slash, and Zakk Wylde are just the tip of the iceberg. The chances are that some of your favorite rock songs feature the sound of a Les Paul solid-body electric guitar.

While Gibson originally produced the guitar. The design and construction were granted to Epiphone in order to produce more affordable Les Paul models. The Les Paul electric guitars made by Epiphone are genuine in every way except for the price.

If you are looking for one of the most beautiful-sounding electric guitars, and, is steeped in tradition, easy to play, and at a price, everyone can afford. The Epiphone Les Paul 100 has got you covered.

This guitar has the classic Les Paul shape and appearance but with some slight differences. The body on the Epiphone Les Paul 100 is slimmer than its more expensive cousin. This makes it more comfortable to hold while sitting or standing. And, it is also lighter in weight. This helps to make it easier to play by reducing strain and fatigue on your back and shoulders.

This guitar features the vintage Les Paul body shape with a single cutaway. And comes in a lovely Heritage Cherry Sunburst finish.

The Epiphone Les Paul 100 features an Okoume neck. Okoume is very similar in terms of tone and sustain to mahogany. The big difference is that Okoume is much cheaper. And, unlike mahogany, Okoume is very plentiful and does not have the same commercial restrictions.

This wood is being used more frequently in guitar construction thanks to its low cost and its excellent musical properties.

Using Okoume to build the neck is one of the reasons that the Epiphone Les Paul 100 comes with a smaller price tag.

The neck is bolted on to the body. It features a rosewood fretboard with dot inlays and a scale of 24.75 inches. The fretboard radius is 12-inches and provides for smooth and fast action and playability. Rosewood is often used to make fretboards because of its durability and resistance to corrosion, plus it helps to accentuate the warmth of the Okoume neck.

In keeping with the traditions laid down by the first Les Paul electric guitars, the Epiphone LP-100 features a LockTone Tune-O-Matic Bridge and Stopbar Tailpiece.

The LockTone Tune-O-Matic Bridge allows you to quickly and easily adjust the action on each string individually. This means that you can set the action to exactly the way you like it. This kind of bridge also helps to ensure more accurate and precise intonation.

The Stopbar Tailpiece provides string stability and makes them feel a bit slinkier, which in turn gives you great string bending ability without going out of tune. Both the bridge and the tailpiece are made from high-density metal with chrome plating. 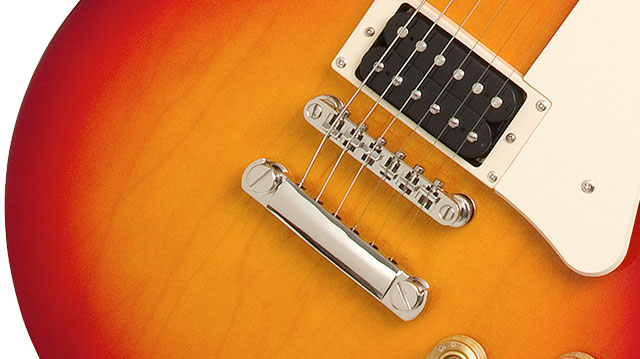 The tuners are premium 14:1 die-cast machine heads which provide solid stability and help keep the strings in tune for extended periods of time.

All the hardware works just like it should, and the chrome appearance completes the look of a classic Les Paul electric guitar.

The first Les Paul electric guitars really made their mark because of the pickups that were used. And, the Les Paul was the first solid-body electric guitar to feature two covered humbucker pickups. The Epiphone Les Paul carries on this tradition with a tiny variation.

The Epiphone LP-100 features uncovered humbucker pickups. Uncovered humbuckers are typically hotter than covered ones. This means you can get some screaming overdrive and distortion that pushes the gain way up, without losing definition in the chords or sound.

The neck pickup is a 650R Humbucker, and the bridge is a 700T Humbucker. Each pickup has dedicated volume and tone control knobs so you can dial-in the Les Paul tone that suits you best.

Handle a variety of musical styles…

With these humbucker pickups, you can expect the guitar to have enough power and punch to handle a variety of musical styles. The sound of these humbuckers could be described as refined. They are quite comfortable working on softer blues and jazz styles, while also having the guts to blaze epic ballad solos full of gain and sustain.

The bottom line is that the pickups on the Epiphone LP-100 offer the classic Les Paul tone and can tackle a whole lot of different musical styles.

There is no mistaking the look of a classic Les Paul solid-body, and Epiphone has done a spectacular job staying true to the vintage aesthetics and appearance.

The sound of the Epiphone Les Paul 100 has all the characteristics of the “Les Paul Tone” that is big and warm. There may not be the same output fidelity as a Les Paul made in the US. So, unless you are doing recording work in the studio or are going on tour, this difference will hardly be noticeable. Especially if you are just starting out with your first solid-body electric guitar.

Epiphone does put out junky guitars, nor do they place quantity over quality. Epiphone has simply made a high-quality, low-cost version of a legendary electric guitar that does not disappoint. They can do this by using different woods that are cheaper, and by using pickups that have less winding than the American-made cousin.

Anyone who is looking for an affordable electric guitar that will deliver the kind of tone and sound Les Paul’s are known for, with the same classic look, and is easy to play, look no further than the Epiphone Les Paul 100.

Your chance to break into electric guitars is here. Own a little bit of history and start your own journey on the road to rock n roll.