Epiphone is always intrinsically linked with Gibson. No matter what you say or do, the comparisons will always be there. In many respects we find it quite a sad story, Gibson first started to produce guitars in 1894. Epiphone had been in the business of guitar-making for 20 years by then. In the 60s, they were in direct competition with each other despite being owned by the same holding company.

There was a period of time when the Epiphone pushed Gibson out of their self-imposed superior status. In the 60s, Gibson had the 330, but Epiphone had the better looking and more stylish Casino. The Epiphone Casino became a cult guitar. It was used in the studio and on stage by George Harrison, John Lennon, and Keith Richards – illustrious company, indeed. It took over, and the Gibson 330 was nowhere. Gibson didn’t like that.

You want to hear that great Casino sound?

‘You Really Got Me’ and ‘All Day and all of the Night’ by the Kinks has Dave Davies playing the riff and solos on a Casino. Not Jimmy Page, who has often been linked with that work. He was on the session but played a background rhythm guitar. 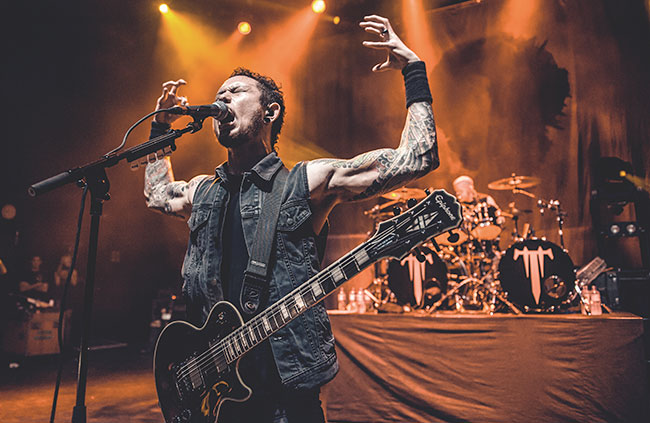 In time both companies suffered from weak management and were not helped by Fender doing the business. Gibson finally took control of Epiphone and labeled them as their cheap alternative. This was emphasized by Gibson’s still being made in the US, but Epiphone manufacturing sent to the Far East.

The label has been hard to shift…

It almost seemed like a deliberate act to make sure Epiphone never reached the ‘marketed’ Gibson quality. Gibson got the best of everything, Epiphone the best of what was leftover. The cheaper alternative. But let’s not forget here that Gibson has produced some ‘pups’ themselves.

Epiphone now, though are producing good guitars. So, let’s take a look at one in this Epiphone Les Paul Custom Pro Review.

An iconic guitar of the 60s and 70s. Some loved it, and others didn’t. We have heard a pro say, “If it’s not sunburst, it’s not a Les Paul.” Strange that you could get this guitar in ebony, or black as some referred to it, and in white. It had gold fittings, which also seemed to upset our friend. ‘That’s not a Les Paul…look at it…Pure Las Vegas,’ he would scream. Maybe, maybe not, but when someone played it, it took off. 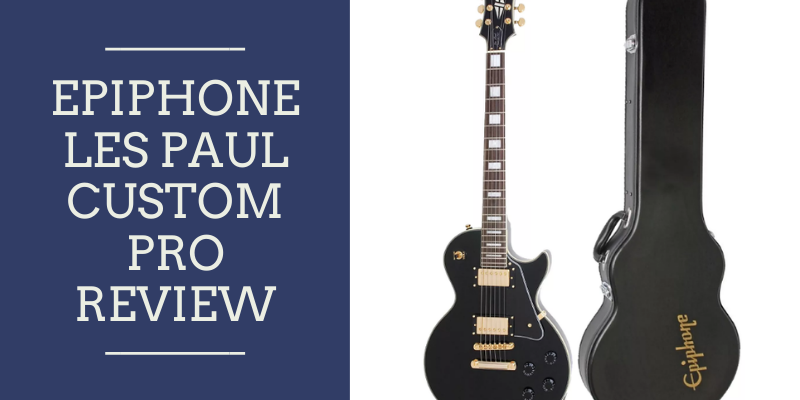 But being a Gibson, not many could afford to buy it. Enter Epiphone, who was given the opportunity to recreate it. They did just that. In producing the Epiphone Les Paul, they have blurred the lines between themselves and Gibson. The point where one starts and the other ends are no longer clear.

It used to be you could tell them apart just by the weight when you picked them up. Not anymore, not with this guitar anyway. If you didn’t know you could quite easily think you were playing a Gibson. To find out why we need a closer look…

Of course, the body design features the legendary shape. Wouldn’t be a Les Paul if it didn’t. The materials used are a combination of woods that are traditional to this guitar. Mahogany and Maple have been used to construct the body of the Les Paul since the beginning. So it is with the Epiphone Les Paul Custom Pro.

These tonewoods as they are known to help to produce the sound. Epiphone has used genuine mahogany for the body and topped it off with a classy Maple veneer. This is the classic body design that defines this guitar.

Gibson, however, has since changed the design from the original…

They now use multiple pieces of mahogany with multiple strips of maple for the top. But, because Ephiphone has used solid mahogany, that is why it feels so much like a Gibson. The weight of it is surprising. It weighs a fraction under nine pounds.

It has the traditional scratchplate and also the white binding that has been given the ‘aged’ look.

Authentic woods used on this guitar mirror the words used on the originals. A good start! 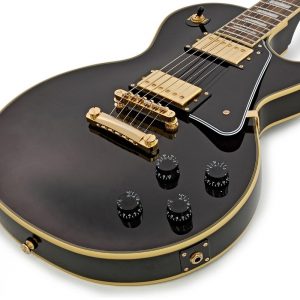 It is designed with that delicious to play ‘D’ profile neck with a very slim taper. As per the original Les Paul, it is made from one piece of mahogany. This is another piece of the authenticity of design that has now been discarded. The necks today are made from a three-piece maple design.

The neck is glued into the body. It has 22 medium-sized jumbo frets. There are also large block inlays. The neck has a traditional 24 and three-quarter inch scale. The neck is finished off with the traditional Rosewood fretboard. Epiphone has also gone for low profile fretwork. They sit very low on the fingerboard.

Held in the hands and then rested on your knee, this feels quite a substantial instrument. One of the ways you can tell even a very good copy is often the weight. Close your eyes, and you cannot tell the difference between this and a Gibson.

Staying as close to authenticity as possible, Epiphone uses the Tune-o-Matic bridge. ‘TOM” has the usual fixed or floating design. Created by Gibson’s Ted McCarthy, it was first used in 1953 and fitted to the Les Paul in 1954. It is a clever design that gives you the ability to get the intonation just right and adjust string height quickly and efficiently. It also provides a union between the body of the guitar and the strings helping to create the sustain and overall sound. 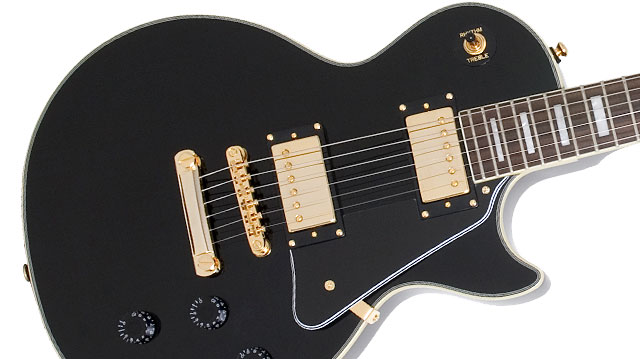 Epiphone has included this bridge along with the standard tailpiece. Both the end-piece and bridge are gold plated.

At the top end, there are some decent quality die-cast tuners that are gold plated. The tuners are not locking, but they perform well. They hold the guitar in tune and maintain the intonation. That is their prime job. The Epiphone name and logo are inlaid, and the descriptive bell announces ‘Les Paul Custom Pro.’

No guesses as to what is fitted on the guitar. What it is ultimately going to sound like has a lot to do with the pickups that are fitted. Epiphone has installed a pair of their own humbuckers, the Epiphone ProBucker. A lot of people won’t have heard of them

When Epiphone sat down to design this guitar, they knew how IT would be judged and how THEY would be judged. They knew people would recognize the shape, but there was something more important. The Sound. The original Les Paul guitars had PAF humbuckers. 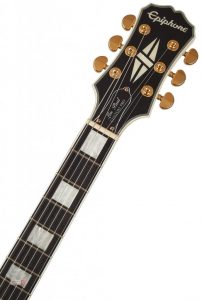 Nothing secret about what PAF stands for…

Simply, Patent Applied For. First designed in 1955, this passive magnet-type pick up very quickly became the Pat No (Patented pickup) and was fitted to the Les Paul range.

Epiphone have taken that basic PAF design and replicated the sound. Have they got it right? Just a bit. These pickups will take you back to that hand-wound ear-shattering sound. The sound that us Fender freaks poured scorn on but secretly, very secretly admired.

That sound was the very reason for the existence of this guitar. Many will say that the later Les Paul’s just ‘don’t sound the same.’ They certainly don’t. That is why people pay a fortune for the originals. Surprise yourself, take a listen to the Epiphone Les Paul Custom Pro. A ghost from the past is among us.

Controls, of course, are basic and functional. They are on all Les Paul guitars. Two volume controls, one for each humbucker, two tone controls, and a pickup selector switch.

However, there is an extra feature here. The pickups can be coil-tapped by pulling out each volume knob. It is a simple push and pull design. Coil tapping is a way of shutting off part of the humbucker, so you are left with a single-coil sound. Essentially the guitar is trying to be a Telecaster (just a little joke, sorry). It has the effect of changing the sound of the guitar and making it a little thinner.

The slim taper of the ‘D’ profile neck we have already mentioned. It makes this guitar great to play. The natural feel of the neck in the hand is smooth, and it is a notoriously fast design. It is balanced and comfortable, and despite its weight easy to move around. It plays smoothly and very well. Each player will set it up differently, but the feel of playing a great guitar will always be there.

Now we come down to the real issues. When you look at the price of a guitar, it is easy to judge it on that criteria. If you judge this guitar in its price point, you will be making a serious error of misjudgment. The sound of the Epiphone Les Paul Custom Pro is surprising, to say the least.

It generates a lot of power and expression, but it is the options that are the interesting thing here. Yes, you have the familiar sounds of a couple of humbuckers in full flow. Yes, you can create “face-melting” blues solos with intelligent use of those picks ups and the tone controls.

But with the coil-tapping facility…

You can call-up just about any sound you want. There is a certain brand that could not do that. The answer to that will probably be that they don’t want to. Ok, you don’t want extra tones, that’s fine. More on this later.

But it also can play heavier sounds. Riffs, solos they all sound pretty good from where we are sitting. This guitar is a powerhouse of sound waiting to be unleashed.

Epiphone, no doubt, spent a lot of development time recreating those PAF sounds. That is the sound that made this guitar. The original dual-coil power that moved some venues three meters to the left as guitarists let rip.

But with this guitar, there is more…

Let’s go back to the coil-tapping option. You can also get a single coil sound from a Les Paul. Clear, bright, even sparkly sounds pour out of it by pulling a volume control. They disappear into the overdrive of the humbucker at a push of the same control. A pretty good idea from where we are. It makes this guitar a little bit more versatile than your ordinary Custom.

Great looks and style. It looks like an authentic instrument from years ago. Great sounds courtesy of the two specially designed humbuckers. Humbuckers that sound remarkably like the original PAF’s. Add to that the coil-splitting option.

Mahogany body with a Maple top and mahogany neck with a Rosewood fingerboard. Some decent tuners.

All this adds up to a very good guitar indeed…

For the sake of balance, we should find something we don’t like. If we are to be a bit picky, we could say the quality of the tuners could have been better. They are not as strong and accurate to the touch as some. But isn’t that a minor fault? Does it stay in tune? Is the intonation correct? Yes, to both. Not a problem then, and a replacement set is easily fitted and affordable if it does bother you that much.

Is it a Gibson? No, it isn’t. It is an Epiphone. Is the Gibson better?

Some would argue no, but let’s give Gibson the benefit of the doubt and say just a little. Because a little is all, it would be. At the Gibson price for a new Les Paul Custom Pro, is it four times better than the Epiphone? No, it isn’t. The Casino is coming back to bite you. Check out the sound of this great guitar.

As we said earlier. There is a ghost from the past amongst us.