When it comes to rock and roll guitars, there are a few which stand above the rest. One of these monsters of rock is the Epiphone SG Special VE Electric guitar.

The SG (which stood for Solid Guitar) was originally a redesign of the classic Les Paul standard made by Gibson. Making its debut in 1961 the all-new SG was lighter than the original Les Paul guitars and offered a more punchy and thicker sound.

The SG has a smaller body than a Les Paul and features a double cutaway. It is a pure-bred rock and roll electric guitar meant to provide power, punch, and a heftier mid-range tone. While Les Paul was a legendary jazz musician, the music scene in the 1960s had made a big push into rock and roll, and the need for a guitar designed specifically to rock gave birth to the SG electric guitar. 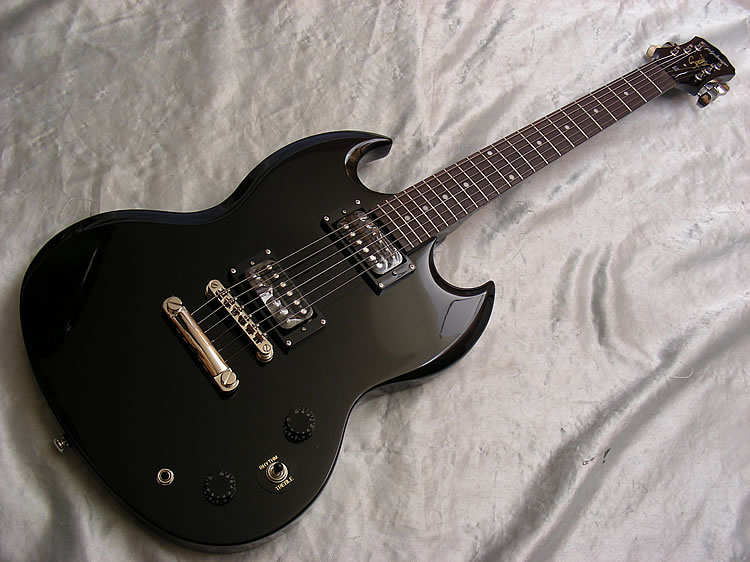 Famous SG players include Frank Zappa, Eric Clapton in his Cream days, Tony Iommi and of course Angus Young. It was the riffs and solos of AC/DC and Angus Young that helped solidify the SG as a premier rock and roll guitar because the sound from the SG was like a Les Paul but just more in your face.

Now, you might be confused because the SG that Angus played was made by Gibson, not Epiphone. That is true, but the Epiphone SG Special VE is basically a more affordable version of the Gibson SG; otherwise, the differences are imperceptible.

Think of it this way; Epiphone is the low price, overseas maker of Gibson model guitars. The difference between an American-made Gibson and an overseas-made Epiphone boils down to price more than anything else.

With an Epiphone, you are getting everything you would with a Gibson, with the bonus of a much friendlier price tag.

If you are not sure, please join us as we take a nice long look at the… 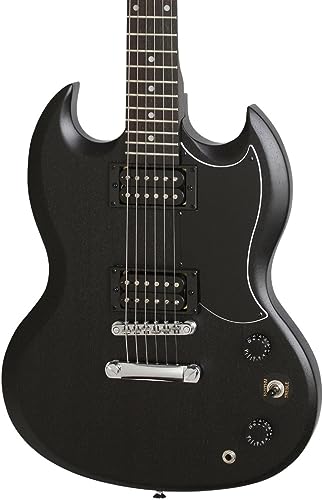 The body is made from a solid piece of poplar. This wood is extremely balanced in tone and sound. It tends to be a little bit on the bright side but offers plenty of warmth and fullness. The tonal balance is similar to alder, which is commonly used in the bodies of Stratocaster and Telecaster guitars.

The poplar body works to give you more mid-range clarity while retaining the full and warm sound Epiphone guitars are long known for.

The double cutaway design means easier finger-work higher up on the fretboard, even on the lower strings. 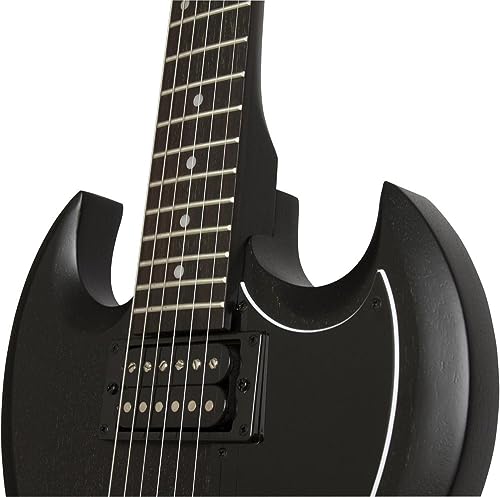 How does that help?

With the double cutaway, you can use your thumb on the low E-string when playing above the 14th fret. This makes heavy, quick strumming and picking close to the body easy and more defined because you can mute the high E-string.

The SG body is lighter than a standard Les Paul because it is thinner. The reduction in overall body size further adds to the mid-range presence and added punch. It is also contoured so that the guitar rests closer, and more comfortably against your body.

The Epiphone SG Special VE is done up in a stunning Ebony Satin with a nice, black pickguard making it a sight to behold.

Mahogany is a common wood used to make electric guitar necks. The tone and sound of a mahogany neck tend to be warm and thick. It is also a very strong wood, which makes it an ideal choice for heavy rock styles and ensures wear and tear won’t warp or break the neck.

You would need to go full Motley Crew smash session to really damage a mahogany neck. 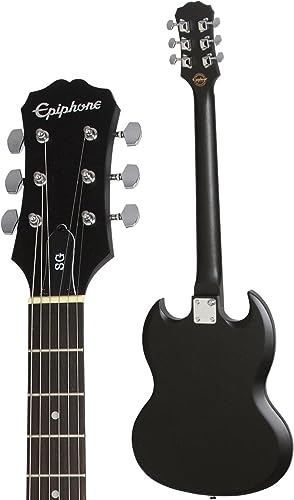 The neck is bolted to the body with four heavy-duty bolts and a steel-engraved Epiphone mounting plate. Necks that are bolted on are easier to replace than set-in/glued-in necks. This could come in handy if you are looking to re-live the New York Punk scene.

A Gloss finish gives that mahogany a lovely look and slick feel. The fretboard is made of rosewood with twenty-two frets, dot inlays, and a 12-inch radius. Rosewood fretboards are quite common because they accentuate the tone of a mahogany neck while rounding out the overall tone.

The 12-inch radius is pretty standard for Epiphone electric guitars. This radial design helps to make it easier to blaze through power chords without adding extra strain on your hand or fingers.

The neck on the Epiphone SG Special VE is strong, smooth, and makes for easy playing and wonderful definition.

The Epiphone SG Special VE features a classic LockTone Tune-O-Matic Bridge with stopbar tailpiece. The LockTone Bridge is great for adding a slinky feel to the strings when playing close to the bridge. This type of bridge also means adjusting the action on individual strings easy and precise.

The stopbar tailpiece is the same vintage design as the ones found on Les Paul standard guitars. Your intonation is assured, and the overall sustain will ring longer. All thanks to the LockTone Bridge and tailpiece.

The tuners are Epiphone premium die-cast machine heads that will keep your strings in tune with ease and precision. 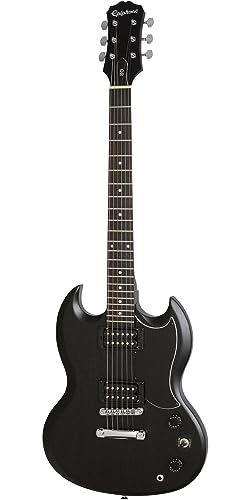 These ceramic uncovered pickups are designed to give you more punch and power. They are brighter and crunchier than normal humbucker pickups. The bridge pickup has slightly more output than the neck pickup. So, when in the lead position, you get plenty of heat.

There is a single control knob for volume, and one for tone. These two controls plus a three-way position toggle switch are more akin to a Telecaster set up than a Les Pual set up. This is an important distinction of the Epiphone SG Special.

Greater response from both humbuckers…

With a single tone control knob for both humbucker pickups, there is less on-the-fly tone shaping. The advantage is a greater response from both neck and bridge humbuckers.

The Epiphone SG Special VE has its own distinct sound and tone. This is thanks in large part to the pickups and their configuration. It is a sound that has been made for rock first and foremost.

As a rock and roll guitar, the Epiphone SG Special VE is no joke. Based entirely on the original Gibson designs, there is no shortage of power and punch with this guitar. Anyone looking to rock out will find the Epiphone SG to be a brutal battle-ax that is capable of shaking you all night long.

This guitar costs remarkably less than a thorough-bred Gibson. But, it doesn’t cut corners on sound, tone, or quality. In this day and age, the low-cost electric guitar models are able to hang in the ring, round after round, with their more expensive twins.

Epiphone is no exception. The Epiphone Company continues to impress with its affordable, high-quality guitars.

The SG Special VE by Epiphone is as blue-collar as any rock guitar can get, especially in regards to the price. This guitar is ready to rip, rock, and fight.

Better hope you know how to handle it.