Fender-the very name conjures up magic in some people’s eyes. It is a name forever linked with music and great musicians. Some guitar players and bass guitarists refuse to touch anything else. Leo started a dynasty that continues to this day.

It hasn’t always been sweetness and light with this behemoth of the music industry. So, before we get into the nitty-gritty of this Fender Super Champ X2 Tube Amp Review, let’s look at a little bit of history…

…and the Strat and Telecaster were fighting and winning the battle with the Gibsons. They had the greatest two bass guitars there were and probably still are. But then it went ‘wotsit’ up.

In 1965 CBS bought Fender. The roller coaster that had been climbing suddenly peaked and started a downward plummet to earth. And what a fall it was. We have a bass player in our midst. He always smiles when he reads reviews about instruments made in the Far East. He will tell you quite seriously.

“The two worst bass guitars he ever played anywhere at any time were both US-made Precisions.”

Terrible isn’t enough of a word. Shocking is his description of them. This is from a Fender man. Fender had to change, and they did. They had a few moments, but it took them to the 80s to really get back on track. About the time, CBS disappeared.

In the views of many, Fender never regained the ‘Leo influence.’ But through this guitar turmoil, the amps were still good, and the Fender Champ was one of them. 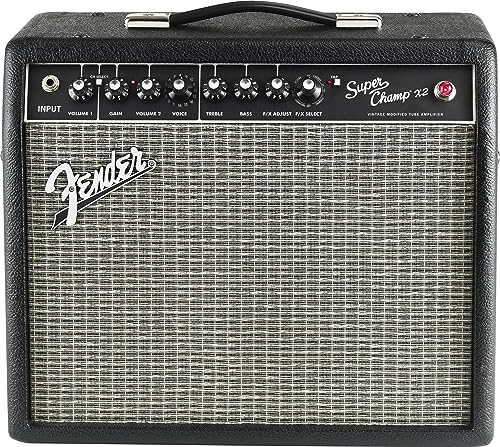 Fender has come up with a fresh take on their Super Champ. They are taking amps with what some might think a low output to a higher level of performance. It is what some might refer to as a hybrid. It brings together a real tube preamp and mixes it up with a digital power amp. With the built-in digital effects, you get a great blend of digital and analog sounds.

It is, as we shall see, packed with effects and options but still manages to maintain its tube sound. The modeling effects using that tube sound and the onboard effects very impressive. 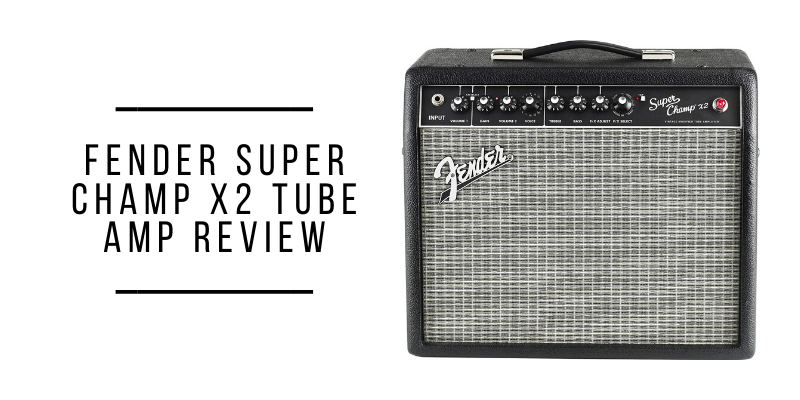 As with the vast majority of speaker cabinets these days, the cabinet of the Champ X2 is made from fiberboard. The quality of this ‘wood substitute’ has improved immensely over the years. Technologies have been able to bind the wood chippings together in a much tighter and harder formation; This, of course, makes them tougher and able to withstand the pressure of joints with stability.

In the case of the Champ X2, it is built well and has a strong, stable feel to it. It is covered with a vinyl material that gives its traditional Fender look. This is completed with the iconic speaker cloth that we all know Fender for. A good look around shows that the vinyl has been fitted perfectly.

There are no visible potential peeling areas, which we think is always a matter of concern. However, the cabinet is quite thin, and the front baffle seems to have the minimum of bracing. 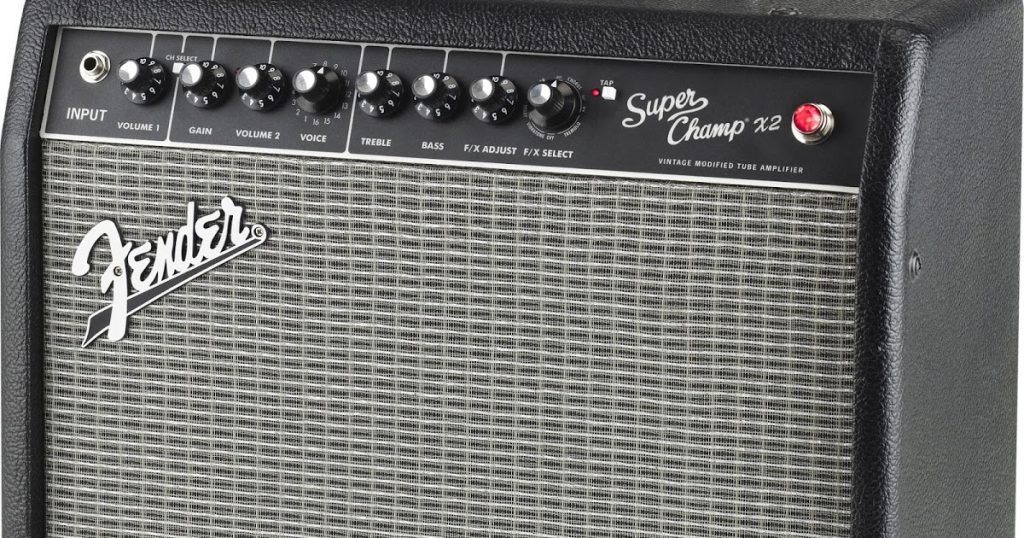 It isn’t a huge cabinet measuring 15 x 17.5 x 9 inches, and at 24 pounds is easily portable. Control knobs and switches maintain the original Fender design and are made of a tough feeling plastic. They work smoothly and again don’t feel vulnerable at all. We mention this because sometimes, on some amps, the controls don’t feel positive. They are either weak or very stiff in their movement. Not the case with these.

It is made with a mixture of tubes (or valves for the Brits). We have one 12AX7 preamp tube and two 6V6 forming the hybrid design we referred to earlier — an attempt to give the best of an analog sound with digital effects.

There isn’t anything quite like the sound of a tube amp. Over the years, Fender has made some classics. It has two channels and a power rating of 15 watts. And that seems to us a very loud 15 watts.

Fender designed a special speaker to go in this latest incarnation of the Champ. At 10 inches in size, it certainly packs a punch. At 15 watts, you can rehearse with your drummer and still be heard. Maybe not suitable without a bit of external help for a gig, though. But for practice at home and some very light rehearsal, the speaker will cut through without a problem. 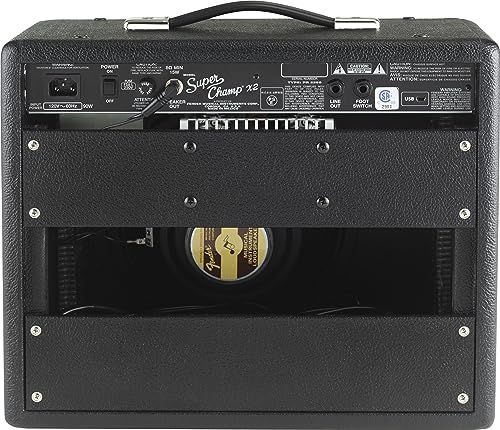 We would say though that maybe it could have done with a little more power than just 15 watts. That would, therefore, demand a bigger speaker.

Is this amp designed for practice and a little modeling only?

If so, then a ten-inch speaker is perfect. You get the feeling though that maybe they wanted it to do more. The problem is without a bit of external help; it can’t. With a bigger speaker, it could have. I suppose it depends on what you use it for.

Basic and simple and well laid out. A single input with a volume and a second channel with a channel selector switch. It doesn’t have an input for the second channel. The second channel has controls for Volume, Voice, and Gain. Treble and Bass controls, of course, and also effects select and adjustment controls. There is a tap control for modulation etc. with a flashing LED.

On the rear, a Speaker out and a Line out. A USB port and a socket for a footswitch which is not supplied and is an optional extra.

All simple and well laid out and quite self-explanatory

With a purely analog amp, you cannot have digital effects obviously. Hence the idea of this hybrid formation where both options are built-in. With this, the Fender Super Champ X2 scores heavily.

You can select from six classic amps, from the ‘Blackface’ and ‘Tweed’ models to some of the more modern amps. From there, you can add on 15 digital effects, and suddenly, your tube amp has another dimension. You can apply the effects in certain situations, but still at the root of it all is that coveted tube sound.

The effects include delays and chorus, as well as tremolo and vibrato. The digital options are necessary to be able to generate the sounds of the other amp models. And it does simulate them well and all from a single ten-inch speaker.

As a helpful addition, when you are using effects that may require some form of modulation. There is a tap tempo control to allow you to adjust it to your needs. 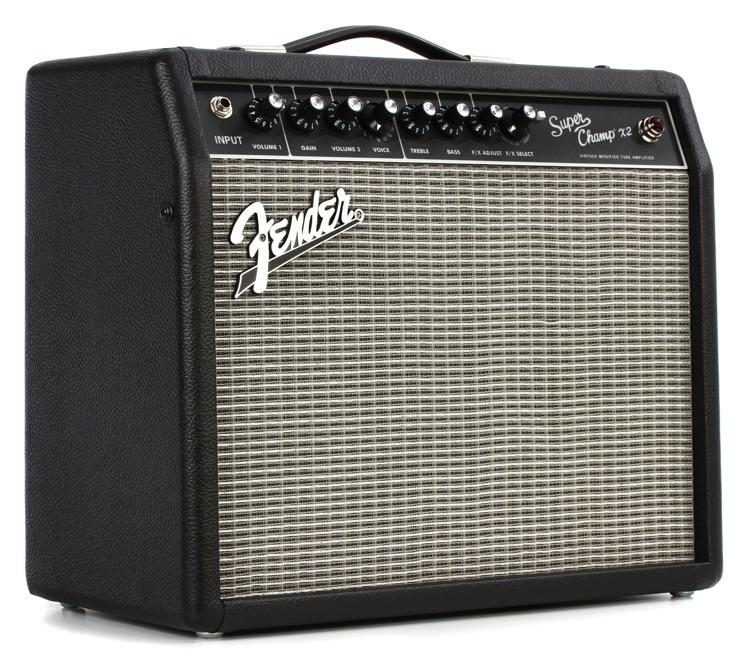 With the inclusion of digital facilities that will also bring you the chance to do some sound modeling. This is not strictly a sound modeling amp, but there is enough onboard to allow you some real potential for some sound management.

It has 16 different voices and a treble and bass EQ. With the inclusion of the effects that are onboard, you have enough options to be getting on with.

But it goes a little further…

The USB port can be used to link up with the Fender Fuse software. There you can customize your sound even further. Edits are available for both the amps voices and the effects. Suddenly the modeling possibilities go a stage further. You find a sound you really like, and you can download via the USB, to your DAW.

It wouldn’t be a Fender Super Champ X2 Tube Amp Review without talking about the sound.

I suppose you could realistically ask which sound, there are so many. But let us just stick to the basic clean analog sound. The clean channel on the Fender Super Champ X2 gives you a great sound. It gives you that crisp and clear tube amp sound.

Many try to create it, even emulate it, but there is nothing like a sound from a tube amp. The sound is great, and that is before you switch over to channel 2 and start playing with amps and effects.

The sound and its versatility will surprise you.

If you’re still sitting on the fence as to whether this is the right amp for you, it’s well worth checking out our in-depth reviews of the Best Guitar Amplifiers Under 250 dollars, the Best Modeling Amps, the Best Portable Amplifiers, the Best Tube Amps, and the Best Solid State Amps currently available.

It might also be worth taking a look at our Fender Champion 40 review if you’re looking for more power from a Fender amp.

So many guitar players you listen to today are stuck between a ‘rock and a hard place.’ Trying to satisfy what they really want from their amp is very difficult for the manufacturers. Many of them have conflicting wants. A great many want the purity of the valve amp, but they also want the effects that amps can carry. Differing amps and their sounds, for example.

This amp does go a little way towards achieving that. We say a little way because, at this point in time, it is not possible to recreate those sounds. It might be one day, but at the moment you can get very close. The Fender Super Champ X2 goes close. Also, at this price point, you have to be a little realistic. The price point of this amp is set to make it affordable. As such, it represents great value.

Having said that and in the interests of balance, we ought to mention some things we don’t like…

It could do with a bigger speaker, which we have already mentioned. If it had a little more power, it would help. It would be useful if there were a mid control and a presence control. It has neither, and an Aux in might have been of use in some circumstances.

The final thing is that you cannot combine all of the effects together. Reverb and delay are fine and chorus and delay — also, Chorus and reverb, but not the other options.

As we said before, at times, it seems like it has a bit of an identity crisis over what it actually is. For some activities, it is not loud enough without external help. If it is just for practice at home, then it is very loud. And if it is for modeling, then it doesn’t give you the options that other modeling amps give, despite the onboard facilities.

But let’s close by looking at the good things, and there are plenty…

It is a great amp; it is a Fender, after all. It is well made, looks good and sounds great. It has a few effects on board and links to the internet for more options. The hybrid design gives sound options and all this at a very attractive price point.

It is a good amp and one we would have no hesitation in recommending. If you’re looking for a high-quality tube amp with a few extras thrown in, the Fender Super Champ X2 must be on your list for consideration.