Although they sound like they might be Spanish or Mexican, Ibanez is, of course, a Japanese company. They manufacture not only guitars and basses but amplifiers, banjos, ukuleles, and other stringed instruments.

Founded in 1957, many of the other big Japanese instrument making organizations had quite a head start on them. Nevertheless, Ibanez was one of the first to gain sales and momentum in Europe and the US. In the early days, they seem to have had two conflicting design themes.

Time for some lawsuits…

One was to do what all the other Asian manufacturers were doing. Copy the most popular Fender, Gibson, and Martin styles. The other to produce guitars with what can only be described as some wild designs. This period was known as the ‘lawsuit’ period, where the US ‘big three’ tried to legally stop production of copies.

Of course, it wasn’t possible, and the only case that went to court-involved Ibanez and Gibson. This was over a Les Paul, which was a little too close to the original. They settled out of court, and Ibanez changed the headstock. ‘Lawsuit’ period guitars ard now worth good money to collectors.

Bit of a disguise…

The name Ibanez was originally used for imports to Europe and the US to try and disguise their origin. It was no longer necessary, and we suppose you could say the floodgates opened to Japanese instruments.

It happened at a bad time for US manufacturers. The mid to late 60s saw Fender sold to CBS and all the problems that caused, and Gibson hit financial trouble as well. The door opened, and in they came with what was now a vastly improved product. Ibanez had officially arrived on the scene. They made the most of it. The name of Ibanez guitars is now highly thought of.

They also attracted some top-end users. Joe Satriani plays Ibanez and even has his own signature range with special single-coil and humbucker pickups.

Now they produce literally hundreds of different guitars and basses, many of them very good. So, let’s take a closer look as we go through this in-depth Ibanez GRX70QA review… 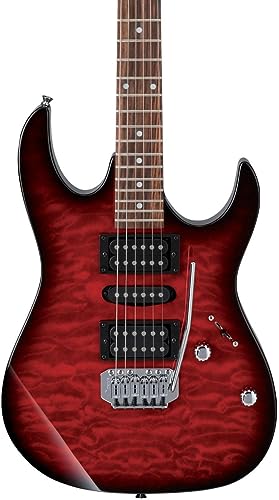 Some of the Ibanez designs over the years have been slightly outrageous. You might call them aggressive in their appearance. It seemed like they were trying to attract a very extreme kind of guitar player. This doesn’t apply to all designs, of course, but just some of their electric guitars. They became quite known for it. The cutaways were deep, and the horns very pointed, and there were some wild looking headstocks. 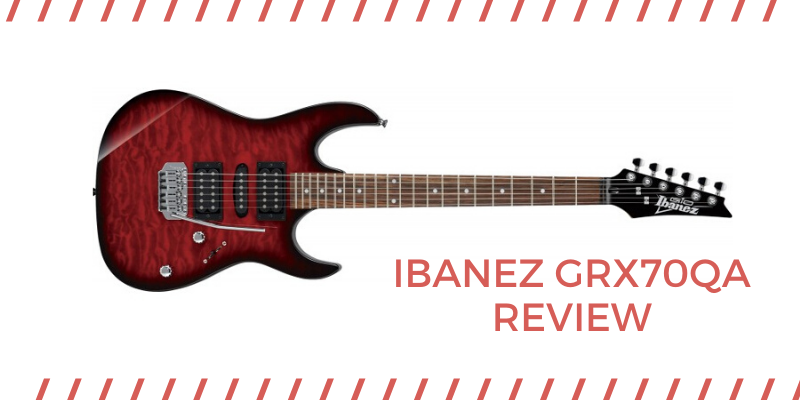 The Ibanez GRX70QA electric guitar doesn’t fall into that category. But it still bears similarities of those designs in its looks. It’s a guitar with some good features that are aimed at all levels of players. Starters will like it because it looks good and plays easily, and more experienced players will appreciate the sounds that it can create. So, let’s take a closer look at it…

At first sight, you cannot help but be impressed with its appearance. Red is often a popular color for guitars, but this one is given a bit extra. More on this later. It has a Poplar body that gives you a reasonable resonance for the tone. It is not the most expensive of tonewoods and is similar to Alder wood. Poplar, though, can deliver a harsher top-end sound.

It is, therefore, quite a decent wood for guitars that are designed to make some noise. Poplar is not a particularly hardwood like Mahogany, so it will show up any damage easily. Over the Poplar is a Maple top.

Up close and personal…

It has two deep cutaways giving total access to the fingerboard and a nice beveled top edge for comfort when playing. It is nicely contoured and encourages you to get up close and personal, as some might describe it. 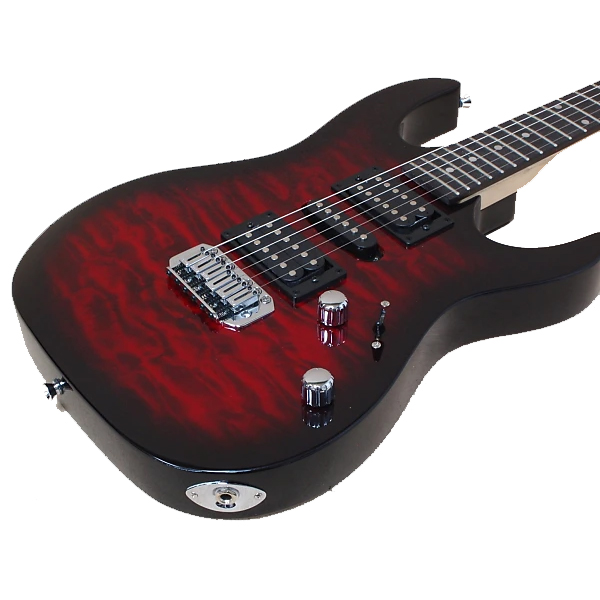 The body is not thick and retains a visual flatness about it. Only the slight contours give it any kind of shape.

Let’s go back to the appearance…

There might be nothing spectacular in its design, but the finish is very impressive. It has a shimmering quilted texture to the red coloring. It is created by clever use of gloss polyester to create an eye-catching design. If you were to use it under stage lighting, it would catch a few eyes we suspect.

To summarize, a decent body with a great look.

Many people say that a guitar is only as good as its neck. There are many things that make a guitar great, but the neck is certainly very high on the list. There is no doubt that this is a very smooth fast-action neck. It has been designed and built for speed. Fast and furious, you might call it.

The GRX neck is constructed of Maple and is given a Rosewood fingerboard. A common combination because they are known to produce warm overtones to the natural tone of the body tonewoods. 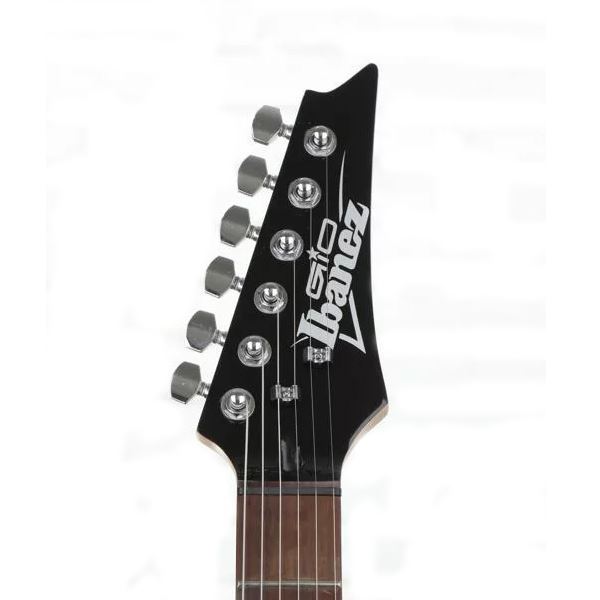 The neck is quick but comfortable and has 22 medium frets on its 25.5-inch scale. In their efforts to make this guitar as fast as possible, they have set the action up to be very low. That is quite normal, of course, but only works well when there is minimal or no fret buzz.

You may need to make some adjustments with this guitar as there is some noticeable buzz. However, it is nothing that cannot be cured by some proper adjustments.

Given this is a budget range instrument, the quality of the hardware is quite good. There are some savings made, of course. It has a plastic nut, and the Ibanez machine heads are a bit cheap and non-locking. That may cause a problem with keeping the guitar in tune for any period of time.

On the plus side, it has a tremolo linked bridge and tailpiece. The bridge is well-designed and has adjustable bridge saddles, which are a nice idea. It is probably not the best quality there is but as we said at this price it is good value.

These are another part of this guitar that is designed to wake up the neighbors. The previously used Infinity pickups have now been replaced with the more powerful Powersound pickups.

These pickups have ceramic magnets that are passive. They help to produce a raw, uncompromising sound. They are arranged in the HSH formation. Humbuckers at the neck and bridge and in the middle, a single-coil. These are not designed to take any prisoners. They are loud and as flashy as the body design. It is very easy to see why this guitar is so popular with beginners and experienced guitarists alike.

They not only give you a variety of single-coil and humbucker sounds but a range of tonal opportunities. 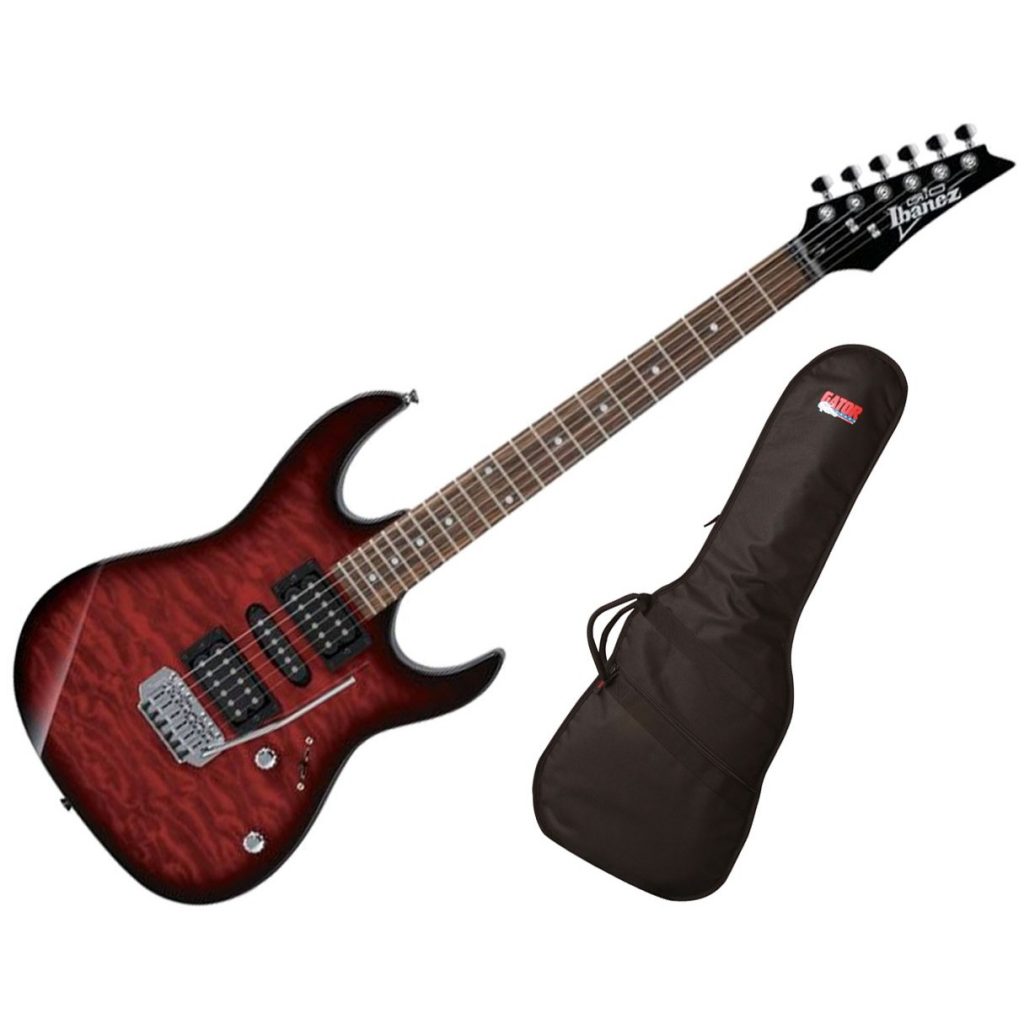 The controls on the face of it are very basic, but don’t be disappointed just yet. There are a volume and a Tone control, of course. They are plastic but well made and quite stable and function adequately.

It is the 5-way selector switch that makes life, and the sound, interesting. Positions one and five use the humbuckers in neck and bridge positions only. Position three is for the single-coil pick-up only. It gets interesting when you use positions two and four.

Yes, there are some changes in the tone, but the single-coil isn’t powerful enough. Even when the humbucker sound is cut to half of the normal power, it can’t make enough of an impact beside these fire-breathing humbuckers, so it is slightly lost.

We have to say it plays very well. The fast speedy neck makes life easy, and once the little bit of fret buzz is dealt with, it is good. For experienced players, the fact you can perform quick single note runs will make it popular. For the beginner, the easy low action makes it easy to play and reduces the effort level.

It has been well-designed for all users, so it feels comfortable to sit and hold or stand with. The body is quite slim, and the contours shape to you nicely.

It’s not often at the price point that you get a guitar that feels so comfortable and easy to play. This one does. The Ibanez GRX70QA electric guitar is a great guitar to play.

Time for some good ol’ whammy…

There is one issue we have hardly mentioned, which is quite essential to ts make-up. We haven’t forgotten about it. The ‘whammy’ bar. This does some damage in more ways than one.

We think it was Jimi Hendrix who first played a ‘dive-bomb.’ Holding a note and using the tremolo/vibrato arm, whatever you want to call it, to lower the note. Made it sound like a bomb dropping. Can you do this on the Ibanez GRX70QA electric guitar? Just try it. It almost feels like the guitar was designed with this one feature in mind. The tremolo arm itself is quite taught but just loose enough to descend the note as far as you want it to go.

But, there’s a catch…

It is a great feature and a huge asset to a budget guitar. But, there is always a but, isn’t there! It will probably play havoc with the tuning. Non-locking machine heads won’t like it at all.

The sound is very good for a budget instrument. The pickups deliver a variety of sounds laced with that delicious humbucker growl. The whammy bar gives you gentle vibrato all the way to huge dive bombs. It is not a guitar that was made to be not played.

However, we are painting a very ‘heavy metal only’ picture here. It is more than that. It has its softer side, and you haven’t got to drive it all the time. That is why experienced players will recognize its potential as a multi-genre instrument if it is treated right.

Sounds are good and punch way above their price point weight. 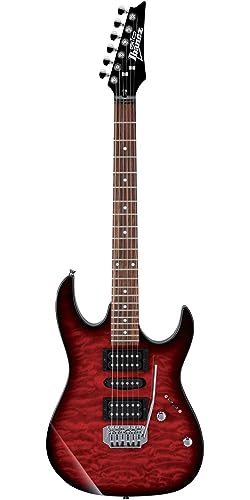 Do You Need Something To Go With It?

Guitars are obviously fantastic, but you’ll need some other items to get the best out of your new Ibanez. So check out our reviews of the Best Portable Amplifiers, and the Best Guitars Amplifiers under 250 dollars currently available.

What Do We Think?

We think it is a decent guitar and for the money a good buy, especially for a starter. It is well made and looks very ‘rock-star.’ The woods used may not be the best, and the tuners are really quite cheap and have their tuning problems. But corners have to be cut somewhere with budget instruments.

It plays well for both starter and experienced players. And once you have solved any fret buzz that may, or may not, occur, you have a good neck. The sound, though, is both good and not so good. The humbuckers are good, the single-coil a little weak, but the whammy bar is brilliant.

So, there are good points and not so good points. We don’t think anything is bad. When considering this Ibanez GRX70QA, you must keep in mind the price point of the guitar. And at this price, it is good value indeed.