Klipsch was founded in Arkansas in 1946. They produce speaker systems, loudspeakers, and drivers for audio at a range of levels. They are now based in Indianapolis and produce all their range of products in Indiana or Brooklyn, New York.

The company has established itself in recent years as a manufacturer of quality products that have impressive designs and attractive appearance. They also have quite a number of patented designs that make them stand out. The most notable are the copper-spun speakers and the Tractrix horns for tweeters. They can, though be a little more expensive than similar products made elsewhere of similar quality.

Nevertheless, they have established a sound footing in the audio industry and are always worth looking at. We are going to take a look at the Klipsch soundbar with subwoofer and see how it measures up. 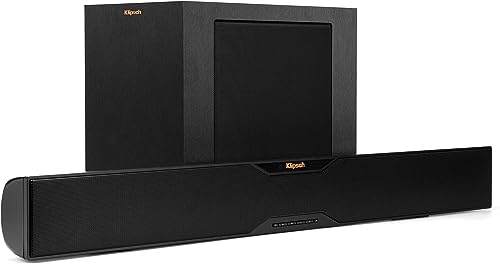 Klipsch has never been a company to rest on its laurels. They always seem to be trying to roll out new lines. In recent months and years, they have been developing what seems like a whole new product range. From huge tower speakers through all the sizes down to headphones, they have been producing products that have a recognizable Klipsch sound. 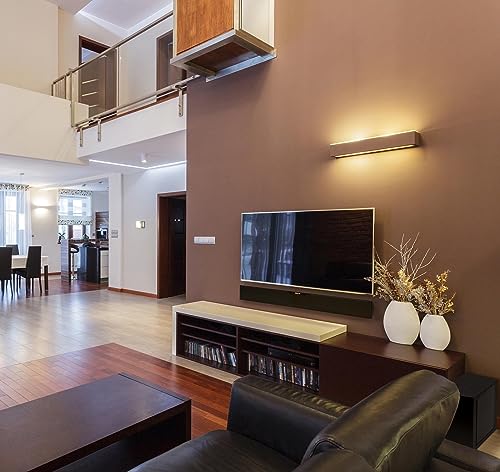 To do this, they have been including in their designs what they are most known for.

The R-10B is a Klipsch soundbar with a subwoofer that is most definitely aimed at the home cinema market. It does not fit into the budget level of speakers and isn’t one. Even though many will consider it an entry-level system, it lacks a few of the features you might expect to see that other manufacturers include.

But it includes the things that Klipsch is good at. And there are some things they are very good at when dealing with entry-level systems. So, let’s take a closer look…

Let’s look at the soundbar build first. We don’t think that Klipsch has gone crazy with the design here. In fact, this could be one area where they have tried to cut a few corners. There isn’t an awful lot you can do to make a soundbar that much different. It has to be functional. But the R-10B is a little light on basic controls.

It is a basic simple 2.1 design that nevertheless is quite sturdy. And is a reasonably tough sealed plastic unit that measures 40 inches by 2.8 by 4.1 inches and weighs just 7 pounds. It has a metal mesh grille. The width is going to mean that it is unlikely to fit between the legs on the stand of your TV. It will have to sit in front of it. If it is on a table, you should just check the clearance between the table and your TV.

Just ensure that it doesn’t hide a small part of the bottom of the screen. It will do this on TVs that sit flat on a surface.

It is finished in a plain black. A good idea as it will then fit most home decor arrangements. The only flash of color is the Klipsch logo, which is in orange.

What‘s in the box?

A quite impressive arrangement of four speakers. The first indications of Klipsch’s developed technology are apparent here. Two of their Tractrix horns house the two 0.75 inch textile dome tweeters. They both have a 90-degree variable angle to suit your requirements.

These horns, of course, are now part of the Klipsch design territory and are instantly recognizable. You could argue that horn-loaded technology is something that Klipsch are very good at. To complete the speaker arrangement in the soundbar, we have two 3 inch woofers with polypropylene cones.

As an extra, two rubber feet are included as an optional stand if required.

Whereas you might think the soundbar a little lightweight with its plastic build, this is a different story. The same cannot be said of the subwoofer. It is not particularly big at 13 inches high by 16 by 8 inches, but it weighs in at a rather large 25 pounds. 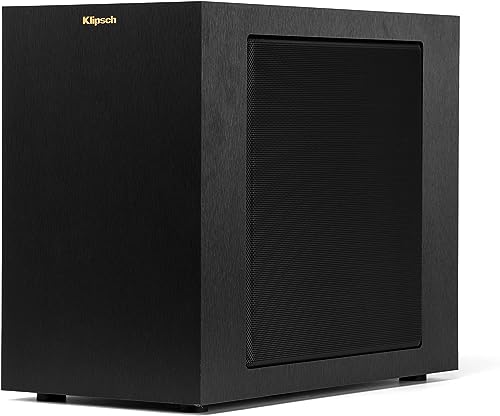 It is built from a decent quality MDF fiberboard and certainly has a very robust feel to it. And it is a side-firing design with a slot port and a metal grille. The cabinet houses an eight-inch driver with a composite fiber cone. It is going to carry some punch, and the maximum output is held to 110dB.

This is a wireless system that requires no physical connections between the soundbar and the subwoofer. This means the subwoofer can be placed in the best position in the room for sound quality and bass response.

This is, of course, where it gets more serious. We can discuss the quality of the build and the aesthetics, but it’s the sound most people are interested in. With the Klipsch soundbar with subwoofer, they do seem to have gone out of their way. They have designed a system with transducers that effectively cover the three frequency ranges. By doing so, the sound is going to be good.

The frequency response is an impressive 27Hz to 20kHz. Nothing particularly exciting about the highs, but that is a low bottom end. This system produces a peak power of 250 watts, which means the RMs will be 100-125 watts.

This system has a few strengths in design and performance….

The volume it generates is just another benefit added to a fast-growing list. The build strength and the slotted port guarantee you a warm, rich bass. The beauty of it is that whilst you can sense its power, it never crowds out the other frequencies. In the bass-crazy world of modern sound effects, it performs.

As you might expect with the array of speaker ranges, the mids are very good. A warm sounding mid-range that is defined and clear. Very little, if any, crossover from high or low frequencies. This means crystal clear vocals.

At the high end…

The high frequencies are where we hear the benefits of the tweeters housed in their horns. The Tractrix horns give a clear and crisp performance that is perfect for movie sound effects. The top might be rolled-off a little, but it doesn’t impinge upon the sound, Just a precaution from it becoming too top-heavy. They are crisp and tight but are never too bright even at volume.

The sound performance is where this speaker system scores heavily. Klipsch has clearly made the effort to build a system where the frequency ranges are all covered. With good definition and clarity, it performs like a level or two higher than its assumed position. An Entry-level system it might be to some. But it has some incredible entry-level sound.

From an area where this system excels to one where maybe it doesn’t. We can only say that we were a little disappointed by the controls on the soundbar. Essential buttons are there in volume up and down, mute, and control for source, but that is all you have.

There is a power-up button not included on the control panel that is almost hidden under the control pad. This seems a little irrelevant as the soundbar and sub automatically turn on when you push any button. They both also turn themselves on when they sense any sort of signal at source input

They have provided a very small remote control. This has the same controls as the control panel on the soundbar. It also has a simulated 3D sound control.

On the front of the soundbar control panel are two small indicator lights. They are small but quite bright with no dimming facility. They are quite prominent in front of you while watching a movie in a darkened room. There are no other displays for information, nor other features though the indicators do flash when you increase the volume.

Finally, hardwiring options are also quite limited. Just a dual analog RCA and optical options. On the rear of the subwoofer, apart from a power switch, is a volume control.

We are not sure why we feel disappointed with the controls. There just doesn’t seem to be as much available as other systems enjoy. However, in many ways, it is good that corners have been cut here to ensure the sound is excellent. Can’t argue with that.

Whether some consider the inclusion of Bluetooth as an extra, we are not sure, and there are plenty of speaker systems that do not include it. But this is a Klipsch soundbar Bluetooth system, so to enable us to give it a little more consideration, we have included it here. 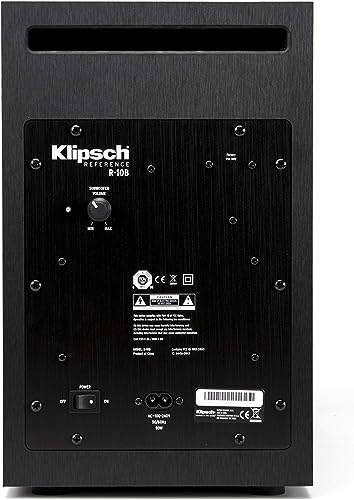 The Bluetooth installed is a step-up from what we often see. This is because this system has the option of aptX audio coding. This improves the quality of the sound, but the quality of your phone may have an influence. Whatever device you connect to needs to be aptX compliant to get the full benefits.

The Bluetooth connection is quick and simple and operates at the standard 30 feet. It is compatible with other devices that have Bluetooth, including phones, tablets, computers, etc.

One final extra worthy of note is the Dolby Digital feature onboard. This produces great sound reproduction results. This is a coding technique that gives five full-bandwidth channels. The usual front left and center but adds surround left and surround right.

There is no doubt it is a quality sound system. It is well made and designed with a very minimalistic feel to it. It is quite attractive, and the black finish ensures it will fit into most rooms. The Klipsch sound is there, and that is where it scores more points. We have a few reservations, though.

The subwoofer is a little bulky, and whilst you do need a decent size to produce a decent sound, this is not a system pumping out hundreds of watts. Also, there is no HDMI connection at all. This does limit the options available in its usage. Relatively minor issues, really.

The one aspect though that we would be concerned about is the price point. Compared to other entry-level systems, it is quite high.

However, returning to the positives of conducting this Klipsch R-10B Review has shown us a good system with an impressive performance. We particularly like the way the system covers all the frequency ranges. It’s a nice design and well-made, so it is a very good system. The Klipsch soundbar with subwoofer is built to impress, and it certainly does that.