To younger people, the idea of watching movies on your home cinema system with surround sound systems and big woofer speakers thundering out film soundtracks is a matter of course. Was there a time when we couldn’t?

The Vietnam war had endnagles, The Doobie Brothers, Linda Rondstadt and the Average White Band amongst others hit the top of the Billboard 100.

Meanwhile down in Arkansas…

Klipsch, who had been producing speakers since 1946, was soon going to be gearing up for a different type of speaker development that was about to arise

Over the other side of the world in Tokyo, Sony did something quite remarkable. They released their Betamax video system to Japan, and then to the wider world. Watching movies at our leisure at home was upon us. Formats have changed since. VHS beat Betamax in the end, but even that went away with satellite TV, etc.

Now we could choose what we watched and when we watched it without leaving home. We have reached the stage now forty and a few years later where we have the cinema experience at home. I wonder if Sony realized what they had actually done? 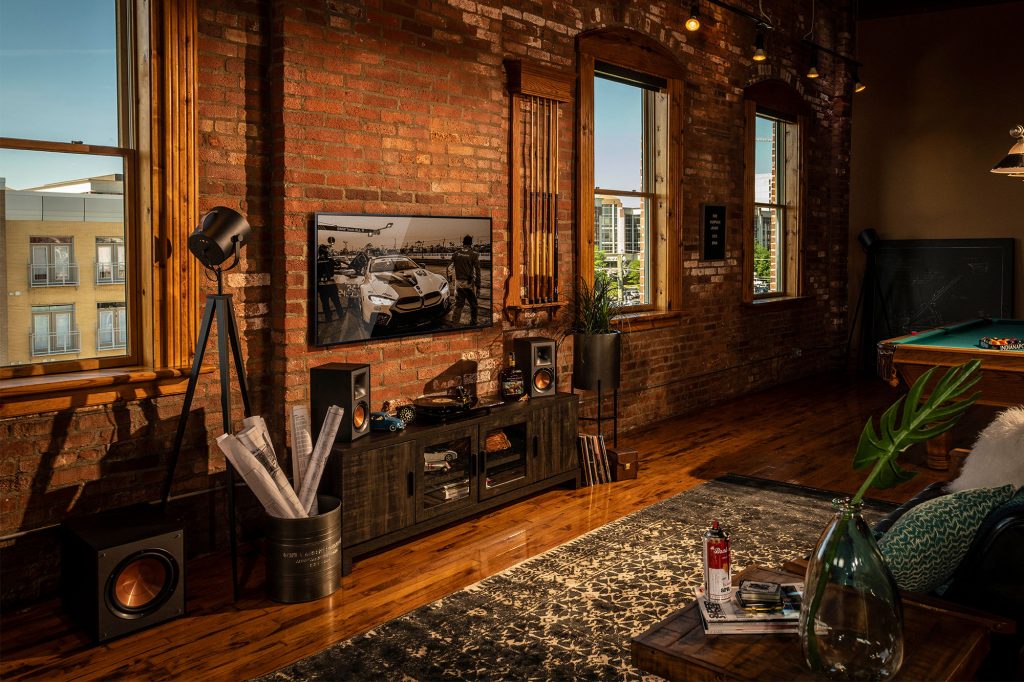 …something wasn’t quite the same as going to the cinema was it? Apart from that is, being charged more for a box of popcorn and a drink than was decently considered reasonable. We were eventually going to get our huge plasma TV’s, but then clever people realized an important part of the ‘cinema experience’ was the sound.

A loud sound, big deep bass sound, sound that was all around you, sound that carried you along with the feeling, the emotions, and the tenseness of what you could see. Now we have it, and at a fraction of the cost, it is probably worth. Now we can really have the movies at home, big explosions and screaming dinosaurs and all because of the development of the home cinema audio packages.

This development went hand in hand with the home HiFi, and the speakers developed for home cinema brought new life to our music as well.

Klipsch is right in this market, and while the Japanese, and others in that neck of the woods, have a great and popular product, Klipsch was toiling away and producing quality stuff at a very good price in the US. 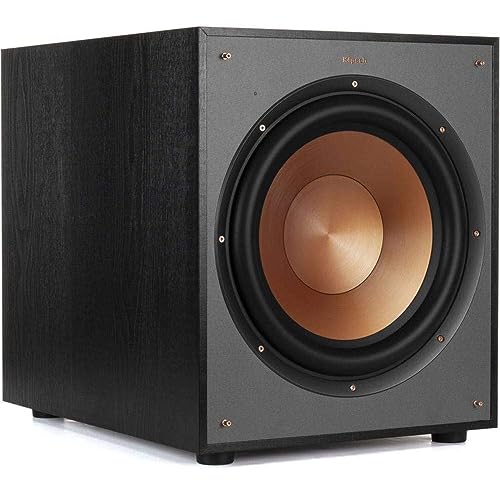 So, Let’s Take A Look At One Such Product, The Klipsch R-120SW Speaker

This is a powerful subwoofer that has been designed for one reason only. To bring ground-shaking bass to your movies and of course to your music in general. In many ways, it is the low, and often the very low frequencies that generate the feeling of being at the cinema, and this speaker does just that.

That is its purpose, and everything in its design is geared towards bringing the ‘cinema experience’ to your home and giving you a bass that moves your stomach three inches backward.

The quality of the build is a big issue with speakers of this nature. Firstly, because they are going to form a central part of your living experience and be very visible, so they’ve got to be attractive and look nice. Secondly, because if the build quality is not to a high standard then as the volume goes up, the sound deteriorates because the cabinet is not built well enough to cope with the pressure of the sound. 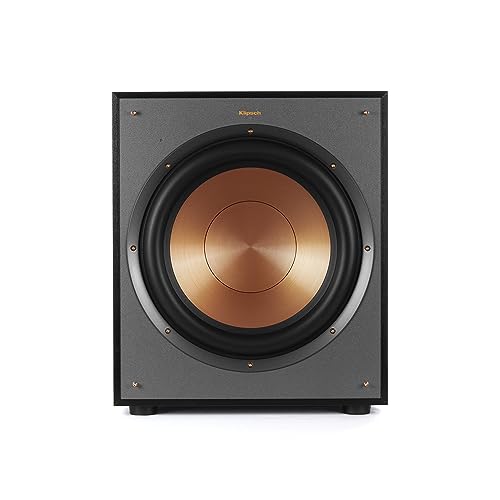 No such problems with either issue with the R-120SW…

It has an attractive if minimalistic aesthetic and with the large copper spun woofer sitting in the middle of the cabinet. Staring in your direction, you are not sure whether to comment on how nice it looks, or duck and get out of the way of the volume, it looks like it might project in your direction. It is a classy looking speaker.

The cabinet itself is built using a reinforced MDF. This material is often used in cabinet making, and it has some myths that maybe we should address briefly. Yes, if the build quality is not good, then it will soak up any moisture and possibly swell up, and that will be the end of it. Yes, because it is made of very fine particles, it does not hold screws well at all.

It is a very dense product and therefore a good material for speaker design even if its density does make it rather heavy. It is of course, also a lot cheaper than using wood, which is probably the main reason for its widespread use. 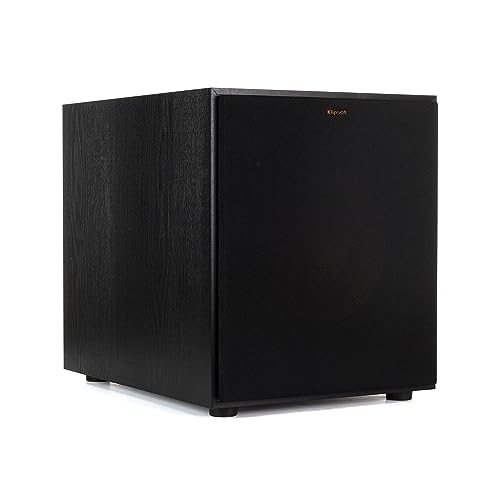 Most manufacturers use it, even some at the very high end. So it has become an accepted material in speaker cabinet construction. If the people doing the actual building are good at what they do, then there should not be a moisture problem. But it is a good idea to avoid trying to use screws.

The cabinet once constructed is finished off with a textured wood grain vinyl that is scratch-resistant. The finished product then looks very attractive indeed and is neutral in its coloring to allow it to fit into any home decor. Four small corner legs are attached, and it is fitted with a low-profile magnetic grille.

It measures 19.8 by 14 by 16.8 inches and weighs thirty pounds. It looks and feels very substantial, and it is.

The center-point of the cabinet is the front-facing subwoofer. This is a twelve-inch copper spun design that has Injection Loaded Graphite (IMG) as a core material for its speaker cone. They are quite rigid but lightweight. And handle low frequencies with a low level of distortion and cone-breakup. It is rated at 200 watts RMS and has a peak performance level of 400 watts. 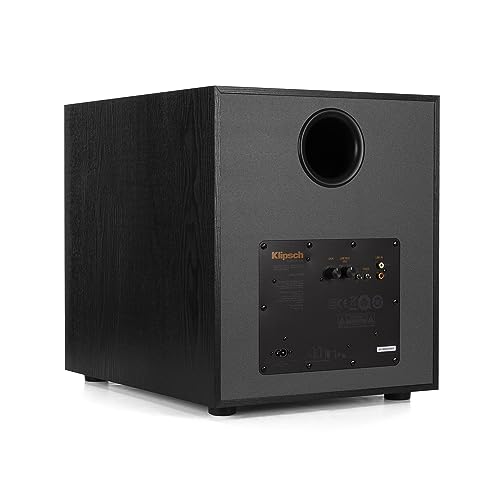 The frequency range is 29 to 120 Hz. It, therefore, delivers a deep, powerful bass sound. On the rear, the extra bass port will add more to the sound. And aids a faster transfer of air from the cabinet giving a cleaner sound.

The built-in digital amplifier delivers power to drive the sound. It provides an accuracy of the source signal giving great detail as well as a lot of power.

When using the R-120SW with other speakers, such as any of the best bookshelf speakers currently available. The low-pass crossover working with a phase control will help you to mix the sounds together to create a balanced sound with just the right amount of bass. The low-pass crossover is important. As it will let any frequencies below the cut off to pass through. 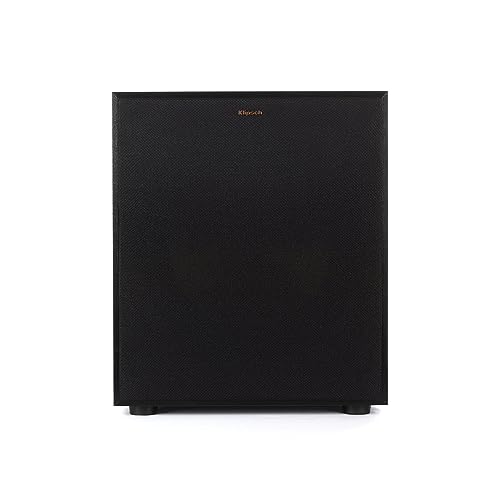 Other additions to the performance include an LED power indicator. This lets you know when the woofer is on or off. And it has controls located on the rear of the cabinet for volume and the low-pass and phase we already mentioned. There are also line-in sockets.

The sound of this speaker is quite staggering, and for the price, it is punching well above its weight. When used as part of your home stereo system, the bass player and drummer have arrived in your room. Loud and clear and vibrant, it adds so much to the bottom end it is amazing. But it is in the home cinema system where it really goes to town.

Deep, warm, and vibrant the movie really comes to life. In fact, you have to be careful not to overdo it with its volume control, and it is very tempting to do so.

In the price range, we doubt there is a better home cinema subwoofer than this. You can drive it hard, and you get no distortion at all, and it seems to handle all the low frequencies right down the scale with consummate ease.

The sound swirls in and around you and you think this is the ‘cinema experience.’

We’ll say it again. We wonder if anyone from Sony had the faintest idea where their 1975 Betamax would take us. We doubt it. To achieve all of what was to come, things had to be digital, and the first digital recordings were still four years away, arriving in 1979.

It hardly matters because where we find ourselves with home movie entertainment is far beyond what might have been imaginable. And companies like Klipsch, not the biggest by any means, contribute so much to the development of this market.

This is a first-class woofer speaker that will form an integral part of your home system, whether for music or movies. It is built well and has a great design and most of all, punches out a shattering bass sound.

It might be considered expensive for just one speaker to some people, but this is real quality you are buying, and a comparable woofer is going to cost a lot more.

What do we think? An excellent speaker in every way and worth every penny spent.