The manufacturers of the subwoofer in this Klipsch Sub-12HG Review, are recognized as a designer and manufacturer of high-quality audio systems. Their history goes back over 70 years to when they were founded in 1946. They were originally located in Arkansas but are now based in Indianapolis. All of their products are manufactured in either New York or Indiana.

They produce audio, and especially speaker systems, for the consumer market and are known for their innovative and attractive designs. Some of the designs are patented by Klipsch and have become almost trade-marks for their systems; they are so recognizable.

These include the Tractrix horn for tweeters and the copper-spun woofers. These designs, whilst giving a quality sound performance, are also very striking aesthetically making then instantly recognizable as Klipsch speakers. Unfortunately, the Klipsch sub-12hg synergy series 12-inch 300-watt sub we are reviewing today does not carry that trademark look.

If there is a reason that Klipsch doesn’t have a bigger share of the market, it is not down to quality. It might, however, be down to pricing. They tend to be a little more expensive than other similar products on the market. This does make some people choose cheaper options.

But, being a little more expensive is usually the case, if you don’t rely on less expensive materials and component parts from overseas. Nevertheless, they have managed to establish themselves in the audio market, and their products are always worth considering when you are looking to upgrade or replace an item.

In this review, we are going to take a look at the Klipsch sub-12hg synergy series 12-inch 300-watt, a large, powerful woofer that delivers a very deep bass sound. 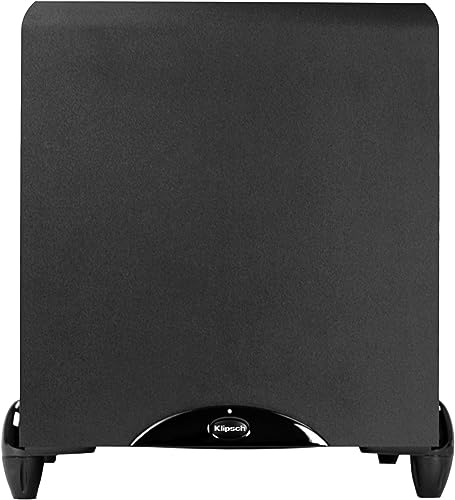 There is an expression often used, size matters. In the case of speakers, it is only partly true. The technology today allows manufacturers to get incredible sounds from quite small speakers. However, where subwoofers are concerned, it matters a little more. 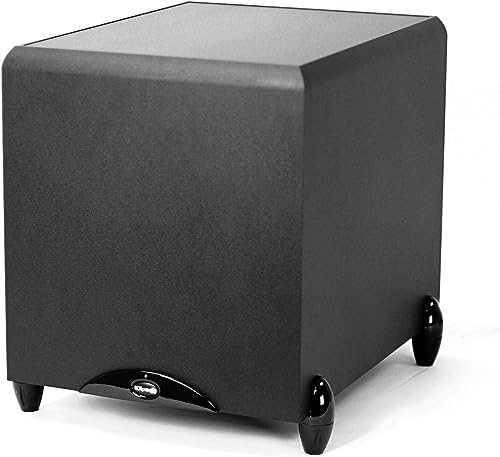 If you have owned a sub with maybe a six or eight-inch speaker, you will have been impressed with its depth and the overall bass sound. Six and eight-inch speakers, when placed in a good cabinet with a quality build, can produce great results. But then one day you get the 12-inch woofer experience, and you won’t want anything less. To produce great bass takes energy, a lot of it — usually, the bigger the speaker, the more energy.

The problem is they are often very expensive. The Klipsch sub-12hg subwoofer breaks the mold on that idea. It certainly isn’t a cheap budget model. But it has a price point that makes it affordable and an attractive option. So, let’s take a closer look at what the Klipsch Sub-12HG is all about…

If you are going to have 12-inch woofer pumping out some serious bass, there is something you need. You will need a cabinet able to handle it. It is quite likely that Klipsch gave that some serious consideration when they designed this cabinet. It is no lightweight. Measuring 19.9 inches by 15 by 18 inches and weighing in at 40 pounds, it carries some weight.

It is made from a high-quality medium fiberboard and is almost industrial in its design. It is a nice looking and well-designed piece of furniture for your room. Nevertheless, it has got a certain aggression about it. It is finished in black and has some rugged feet at each corner. The feet are included to stop any movement by the cabinet whilst it is in use if the floor surface is either wood or tile. 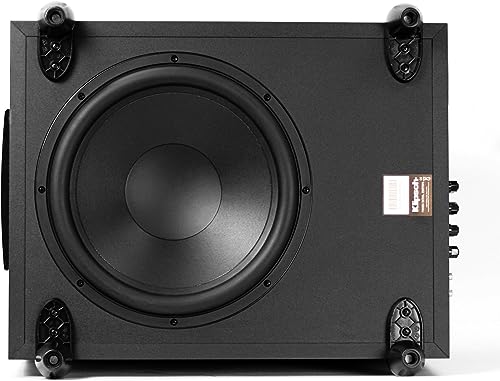 It is a down-firing cabinet, which means the sound generated by the woofer is projected down. That is a different design to a forward-firing speaker. More on this later.

At the rear is a four and a half-inch round bass port. As well as the port, the back also contains a variety of connection options. These include stereo ins and outs and RCA line inputs.

Driving this speaker is a BASH amplifier pushing out 600 watts or 300 watts RMS. BASH technology is too complex to fully describe here. Suffice to say it is a Canadian design that takes a Class D amp feeding Class A/B amplifier. It keeps efficiency high while taking away the need for an output filter.

Returning to the issue of what is better, down-firing, or front-firing woofers. Despite all the hype, there is actually very little performance difference between them. With the front-firing, the bass is fired straight at you. But then it is at a rock concert, and very few find fault in that scenario.

With a down-firing, you are at risk potentially from the floor surface as to how it sounds. Carpeted floors will soak up the sound a little. Hard surfaces will reflect it. To say one design outperforms the other is not accurate and yet to be proven either way.

When you buy a woofer, you do so to increase the bass presence in your system. That system could either be music or home cinema. If you have never owned a 12-inch speaker before, then it may come as a bit of a shock. It goes deep. In fact, of the ten lowest octaves the human ear can detect, this woofer gives you two of them.

It gives you a rich, warm bass you can not only hear, but you can feel. It has a frequency response of 24Hz to 120Hz.

As low as you can go…

The design of the cabinet means that the sound is actually coming at you from two directions. There is, of course, the down-firing main woofer, but there is also the rear-firing port. Stereo with a bass? Well, not quite, but it adds a variety and depth to the sound.

As we have already mentioned, the down-firing driver will be affected by the surface it stands on. This will probably play a part in your purchasing decision. If you have a hard floor, it might be a good idea to consider some sort of coverage under the speaker. A hard surface could send the sound bouncing around and cause distortion.

The crossover is working all the time, and the steep-slope low-pass constantly regulates across the frequency range.

This all adds up to one thing a bass with a really deep experience. It will really show what it is capable of with movies where the depth of the soundtrack is often lost in conventional systems. It is not lost with the Klipsch sub-12hg synergy series 12-inch 300-watt. In amongst the depth, it manages to maintain a tight, accurate sound that doesn’t flood the other frequency ranges.

On the rear of the speaker are RCA inputs that connect it to any other sound system. There is an automatic on and off. This Klipsch sub-12hg subwoofer will turn itself on or off if it detects or does not detect a signal.

On the front of the unit, there is a blue or red display LED. This lets you know of the unit is working or in standby mode. 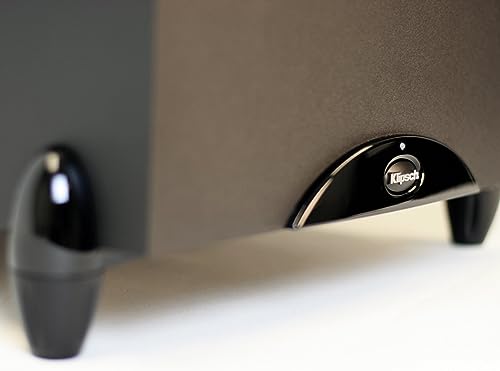 There is no doubt that the Klipsch sub-12hg subwoofer is great to the ear. Some would argue though it is not so great to the eye. It is a big lump of a unit with its 12” driver inside, and we suppose the size cannot be avoided. However, you also feel that maybe Klipsch could have given it just a little bit of styling. It merely resembles a large black box.

There are other subwoofers by Klipsch that feature the companies trademark front-firing woofer with its copper-spun design. They are attractive and look great. This, with its down-firing speaker, which you cannot see, is just a box. What we are saying is that whilst other Klipsch subwoofers would appeal visually, this does not.

We don’t want to dwell on the visuals too much, but it is an important point. This will be displayed in your home after all.

Let’s return to its strong point where it does score some points, the sound. It is rich and warm and very deep. It will give you a big bass sensation, and there is no doubt for home cinema systems, the improvement is likely to be dramatic.

Here is where it will take on the ‘prettier-looking’ cabinets with a smaller speaker size. They are unlikely to produce the sound quality that the Klipsch sub-12hg subwoofer can give you. As we said before, once you have experienced a big 12-inch woofer, nothing else suffices.

We also mentioned that they can be expensive. Klipsch has managed to set this sub at a very affordable price. This makes it not only a good sound option but great value for money.

We found the Klipsch Sub-12HG Review to be a very powerful speaker, and it will add all the powerful bottom end you could want to your audio system. If you don’t mind the lack of style and visual presence, the Klipsch sub-12hg synergy series 12-inch 300-watt won’t disappoint.