There aren’t many more illustrious names in the world of keyboards in the modern world as Korg. Used by some of the greatest musicians, people like Rick Wakeman, Richard Wright, and Herbie Hancock. They have built a name that just means excellence.

Make a list of the most influential keyboards and synthesizers in history and Korg will be in there. This is the company that gave is the M1 and M20, the Wavestation and the Kronos. They know how to put greatness at your fingertips.

In 2017 Korg released a new range of Digital Pianos, one of which was the B1. So let’s take a look to see what it offers in this Korg B1 Review…

A quick look at it reveals that Korg has designed these pianos to be as simple to use as possible. A sentiment we can completely agree with. It is aimed at players who want a great sound, but who also want simplicity. And is supplied in a ‘bundle’ package. 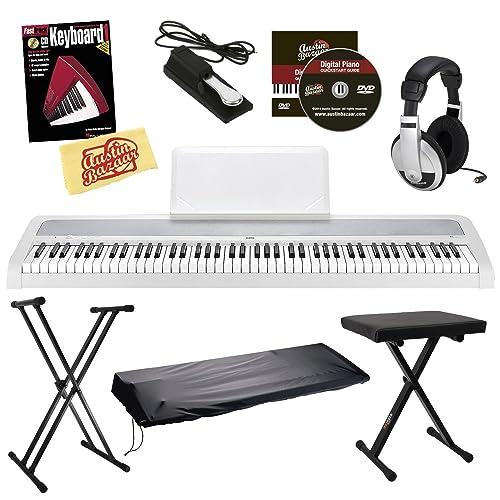 Check Price on Amazon
More on this later…

Before we get into the details, let’s have a look at basically what it offers. Eighty-eight hammer keys that are naturally weighted, The keys are touch-sensitive having heavy, light, and normal options. Eight different sampled sounds including three acoustic pianos, two electric, a harpsichord, and two organs.

It also features a Partner mode option which is great for receiving instruction or teaching with a pupil, MFB – Mechanical feedback technology, and PCM – Pulse Code Modulation, the digital version of analog signals for stereo sound. As well as a built-in chorus and reverb. 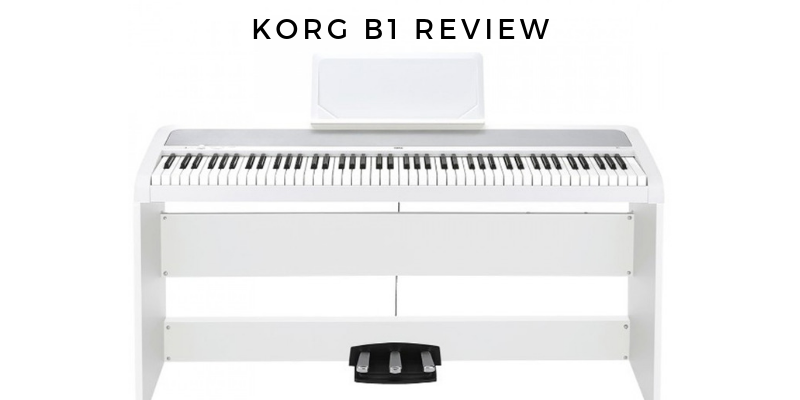 It has two speakers and a volume rating of 9-watts per speaker. Other controls offered are metronome, tuning, and transposition. It weighs just over 26 pounds, so it is considered portable.

Reading through what is included, it sounds quite basic, and it is. The piano is designed for entry-level players essentially. Even though there is no reason why it could not be used by an experienced player for live gigs? However, it is perhaps not built for that purpose and would be best used as a permanent fixture at home or in a place where it will remain.

Instead of Korg taking the easy route and using an existing piano and removing a few features to reduce the cost, they have come up with a completely new design. It is nicely proportioned and compact. And has a design that has very few distractions allowing you to get on with the business of just playing.

It comes with its own stand as part of the package we shall discuss soon, but it can be used on a table or desk.

The speaker system is built-in and is a lengthy affair on the front. Housing two speakers it generates enough volume to be able to play at a comfortable level. 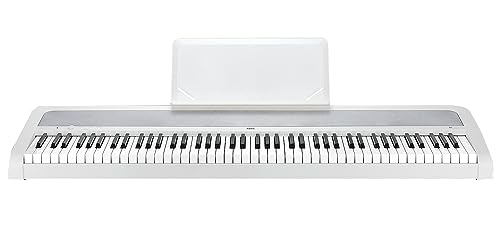 The edges are rounded, which give it a relaxed and comfortable feel and add to the aesthetics of the unit. The piano has a nice white finish, although it is also available in black.

The design then is plain and simple and efficient. If there is one thing that should have been included in the design, it is a screen for the settings, but maybe that would have put the price up. The piano is simple enough to operate that it probably doesn’t need one.

This is an area where some will feel more could have been included. It features a headphone jack socket for private practice, and on the front, there are some very basic controls. These feature an off/on button, volume control, and metronome. There are also piano play and sound controls.

To access the sounds and other available options, you will need to push a designated key plus a button. This is where a display screen might have come in useful until you are familiar with its operation. There are no dedicated Line out or USB connections but you could, of course, use the headphones out go to an amplifier or the best powered speakers.

The B1 has a fully-weighted 88 key keyboard. They are designed to simulate the feel of a real piano. In the higher register, it has a lighter touch than in the lower register, which needs a much heavier contact. There is a clever design to add realism and consideration of your own playing style with three settings – normal, light, and heavy. You can, therefore, choose whichever suits you best. 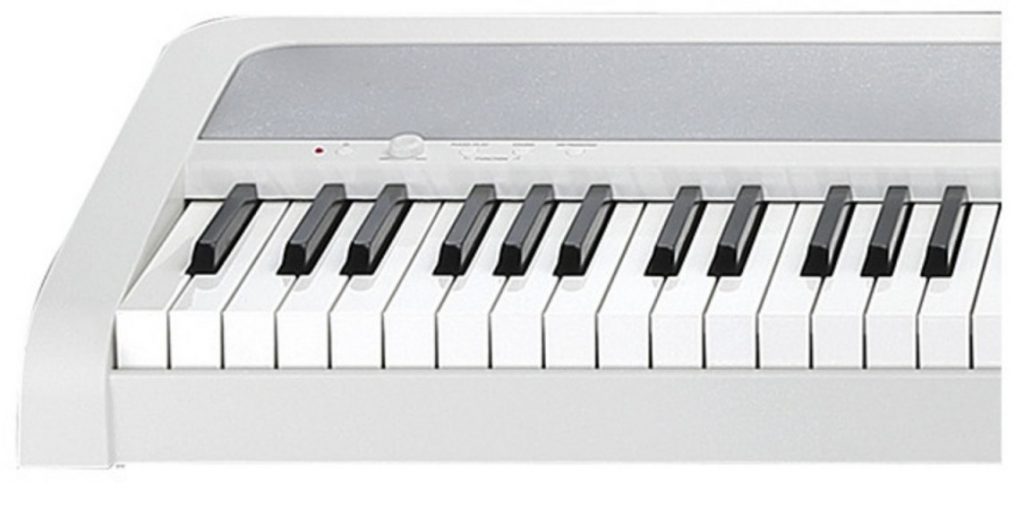 As the action on the B1 is touch-sensitive, if you select the heavy option then to get a good sound, you will have to strike the keys a bit harder. Great for Jerry Lee Lewis, but maybe not so for the average beginner. It is, therefore, adding an extra expressiveness to how you play and how the piano reacts. The opposite is the case if you select the lighter option where a soft touch is required.

Any Cons From The Keyboard?

Not really, it has some good features, and just like nearly all digital piano these days the keys are made of plastic. Some pianos use Ivory or Ebony tops to the keys which when the piano is being used for a lengthy session do help to absorb any moisture and which prevents slipping. Once again, this seems to us a small issue.

Onboard there are eight different instrument sounds. These are three Grand Pianos – Concert, Jazz and Ballad, 2 Electric pianos, Harpsichord, and two organs – Pipe and Electric. These options give you the chance to play in numerous different styles.

Korg has used Pulse Code Modulation or PCM, which is a sampling technology that maximizes the use of layered digital recordings to recreate sounds. The sounds reproduced for the acoustic piano’s is startlingly accurate and is well worth having a listen to. The tones are rich and warm and have a vibrancy of tone that just was not available even a few short years ago.

The sounds are so authentic because of the improved sampling techniques that are currently used. And of course, Korg is very much at the front of such development. The impressive sound reproduction is increased by the simulated resonance of the dampers and vibrations of the strings which add authenticity.

The excellence of the available sounds is extended to all the instruments included. But it is with the Grand Piano that the ambiance of the instrument is really captured.

However, there are no strings or other sounds included, so this is a purely piano-based instrument.

There is sometimes some confusion over exactly what Polyphony is. At the expense of preaching to the converted, Polyphony put simply, is the amount or number of notes that can be played at the same time without any loss of sound. The B1 has 120-note Polyphony which means you are not going to run out of notes even when playing complicated pieces.

Korg B1 Review Other Features

The B1 is fitted with two speakers giving 9-watts of output each. The rich and vibrant sound is achieved by the use of MFB, Motional Feedback. This is especially noticeable when using the Grand Piano sound. Where the low frequencies are controlled and reduce the possibility of distortion.

There are different modes you can utilize when using this keyboard:

Partner Mode – this allows two people to use the keyboard at the same time by splitting the playing area into two halves but having the same note range. A good feature for an instructor with his or her student as they can play together. Sometimes on keyboards, you will get a Dual or Split mode, but these options are not available on the B1. 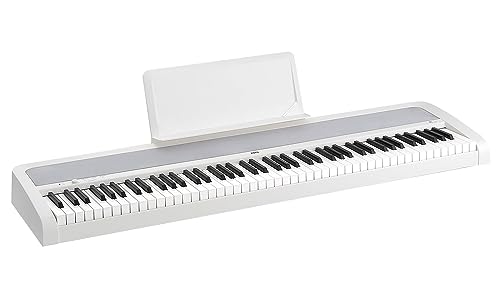 Transposition – the pitch can be increased or decreased by semitones using this feature. This is useful if accompanying a singer and the key just needs a minor adjustment. Also, if a song happens to be written in an awkward key, then a quick transposition might give you easier chords to play.

Metronome – the onboard metronome is a useful extra for perfect timekeeping. The settings for time, volume, and speed can be adjusted.

Earlier in this review, we mentioned the bundle package that is provided. This includes a basic metal stand for the piano and a bench seat, a Sustain pedal, Headphones, and an instructional DVD and book and finally a cleaning cloth.

We would just like to mention that when the piano is delivered, it needs to be assembled. This is not a big job and will take about 30 minutes.

Before we conclude our thoughts on the Korg B1, we would like to mention that this is a very basic model. As such is a bit light in the bells and whistles department. It doesn’t have onboard MIDI to record and playback performances. Neither does it have any built-in songs for practice or preloaded rhythms for you to play along with.

We have already mentioned its lack of external connectivity and that it has no strings or other instruments other than its pianos and organs.

Not just because it is made by Korg who are one of the big boys in keyboard manufacture but for several other reasons. The design is nice, and it is well-made and will not be out of place in any home’s decor. The white finish we think adding to its presentation.

The sounds it produces are excellent and reminiscent of keyboards costing much more. The adjustments to suit variations of playing styles are an excellent addition, as are some of the more basic features like transposition and tuning. The bundle package makes it even more attractive, and the price point makes it incredible value for money.

Yes, you can say it is missing a few features that other keyboards might have, but the qualities it possesses far outweigh any of that. Don’t forget, Korg have installed all of this, especially the sounds, on what they consider an entry-level instrument.

There is no doubt that the Korg B1 is an excellent digital Piano and worth every last penny you will spend on it.