Mackie already has a proven track record with their previous releases of CR studio monitors. And this is a line of studio monitors that is an excellent budget pick for home producers.

But as well as being used for multimedia mixing and editing, the CR range is also suitable for more casual listening. They have a good level of audio quality and clarity, for such an inexpensive speaker, and are a great choice over many similarly priced computer and small speakers.

It will be interesting to see if the latest speakers from Mackie live up to their legend. So, let’s get this Mackie CR4 Review underway and see how they get on… 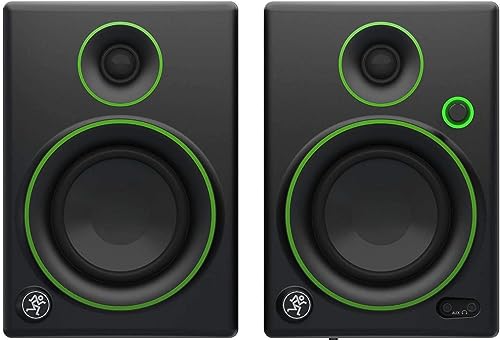 The Mackie CR4 are a pair of compact desktop speakers measuring a compact 8.2” x 5.2” x 6.2”. They have a combined weight of 12lbs. The powered speaker, as you’d expect, weighs considerably more than the passive one.

With the exception of the volume, one auxiliary and headphone input, all the connections are at the rear. These include; TRS and RCA inputs, main power switch, and powered speaker select switch.

The powered speaker select switch is particularly useful. The cool thing is, it allows you to place the powered speaker to either your right or left, depending on which side you prefer to have your auxiliary and headphone inputs. 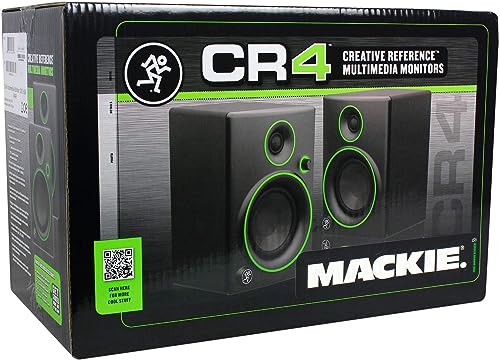 Not quite so good is that the mains cable is permanently attached to the unit. This is something we’d really don’t like to see. It makes changing a damaged or defective cable in the future so much harder. It also makes it harder to switch it out for something longer.

The good news is that all the cables you’ll actually need are supplied as standard.

The Mackie CR4 has a two-way speaker set-up. There is a 4” driver at the bottom of the cabinet with a 1” to the top. It would have been nice to have gone with a slightly larger woofer, but given the size of the unit, and the price, we have no complaints.

Each speaker is capable of delivering 50 watts of peak power with an RMS rating of 28 watts. That’s not exactly a lot, but it should be sufficient when positioned on a desktop in a small room or studio. This kind of close listening was, after all, what they were designed for.

And that’s all there is in the way of features. There’s no wifi or Bluetooth or any other kind of connectivity with the Mackie CR4. Also, there’s no EQ feature. There’s no doubt about it; these are a no-frills set of speakers that are all about the sound.

The design and quality of these speakers is quite impressive, given their price. They look and feel sturdy, for MDF, with zero flaws visible in their paintwork. The cabinets are solid enough with no real detectable vibration or movement.

Mackie has stuck with their signature look and design. However, despite the clean lines, the black ones, with the green trim surrounding the drivers and the volume control knob, might not be for everyone. They certainly make a bold statement but could easily clash with, well just about everything, really. 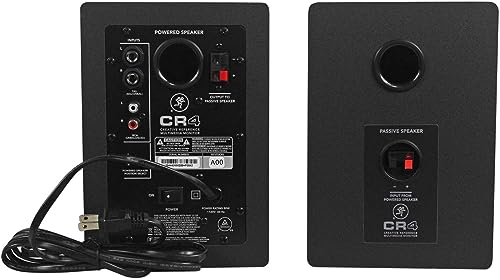 We can’t see these passing the WAF (Wife Approval Factor). If they’re destined for a separate studio or bedroom, all should be good. If not, best to also give the blue trim ones a miss. Play it safe, go for the black ones with silver trim, and you’ll be fine.

The fact is, though, it’s actually reassuring to see a company not over-focus on the aesthetics. It really does fill us with hope that the money has been spent on sound quality. Where it belongs, but more of that later.

A couple of things we do like about the Mackie Creative Reference Multimedia Monitor is how they’ve placed some of the more used controls at the front of the powered speaker. These controls include the on/off and volume control, an auxiliary and headphone input.

This has been done this rather cleverly. It’s great not to have to scrabble about at the side or the rear of the speaker, just to increase the volume or plug in a pair of headphones.

To start with, one thing we really like is that these speakers come with two isolation stands. That sounds a little grand. They are actually made of dense foam, but they look fine and do the job. That job is to angle the speakers in the optimum position and to dampen down vibration. Not that we had any issues with vibration, though.

The Mackie CR4 are pitched as a set of studio styled speakers. As such, we’d expect a flat and neutral tone. Well, the good news is that given the restrictions of their size and their price they’ve done a pretty good job.

The bass response is nice and punchy but doesn’t dominate the overall sound. It’s nice and tight and doesn’t boom even at the lower end of its frequency range. Unfortunately, the physical size of the 4” woofer prevents the Mackie CR4 from being able to recreate sound at the very lowest level of the spectrum. 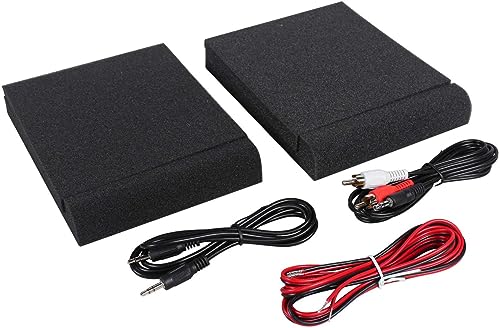 However, given the speaker’s other limitations, the bass functions well and happily rewards the listener with a good quality, well-balanced sound.

How about the mids?

Admittedly, and not unexpectedly, since the woofer has to take care of both the mids and the bass, there is a degree of clarity lost in the middle. The sound isn’t as detailed as we’d like in comparison to a more expensive pair of speakers. But again, given their cost, it’s perfectly acceptable.

Though the mids aren’t as clear as they could be, had been allocated a separate driver, they’re still good enough to hear dialogue and vocals at even low volumes. They don’t have a scooped out feel, and the clarity is sufficient not to make them tiring to listen to over extended periods.

Finally, the tweeter gives a good degree of precision at the higher end. They sound bright, but the sound is not overdone so as to sound shrill.

All in all, given their price-point, Mackie has done a pretty good job of producing a good sounding set of speakers with a relatively flat profile. They may not be the right choice as a primary speaker in a larger studio, but for mixing in a smaller setting, or for editing multimedia videos for platforms, such as YouTube, they’re certainly up to the task.

The bottom line is that although the Mackie CR4 speakers are not completely transparent, they have a sufficiently neutral sound to be used for mixing in home recordings and demos. What these speakers will do well is give a good representation of how the sound will be when listening through another set of desktop or small bookshelf speakers.

Whilst they are never going to replace a professional set of studio speakers, the Mackie CR4s’ are never the less a great set of small and affordable speakers. They undoubtedly sound much better than most of the computer or desktop speakers you’ll find at this price.

What’s more, for the same price, they’d wipe the floor, in terms of sound quality, of every single soundbar we can think of.