Oscar Schmidt and his brother Otto were German immigrants to the US. They formed the company in 1871, but it wasn’t until 1911 that they were able to incorporate the business. Then they expanded very quickly to include a range of instruments and had a marketing strategy totally alien to us today. They had an army of traveling salesmen who would sell the instruments door to door.

As instrument manufacturers, they and their workforce were skilled. As businessmen, they were very clever. Each year they would bring out a new product, ‘Special editions,’ that were linked to an event. They even had music written to commemorate the event. Salespeople would keep records of who bought what and why and the next year’s instruments were made to sell to these existing customers.

By this time, they were making not only acoustic guitars but mandolins and banjos. All were designed to be easy to play for family entertainment before the emergence of radio and ten TV. Oscar died in 1929, and they began to struggle. A new business was formed, but the heady days had left them behind. They were finally bought out by Fretted Industries in 1978. Fretted Industries later became Washburn.

The guitars have continued to roll off the production line, but these days, they tend to stick to tried and trusted paths. They produce some very good cost-effective instruments, and they are a popular brand. They are sometimes known as Oscar Schmidt by Washburn but most commonly just as Oscar Schmidt guitars.

Let’s take a look at one of them, in this in-depth Oscar Schmidt OE20 Review… 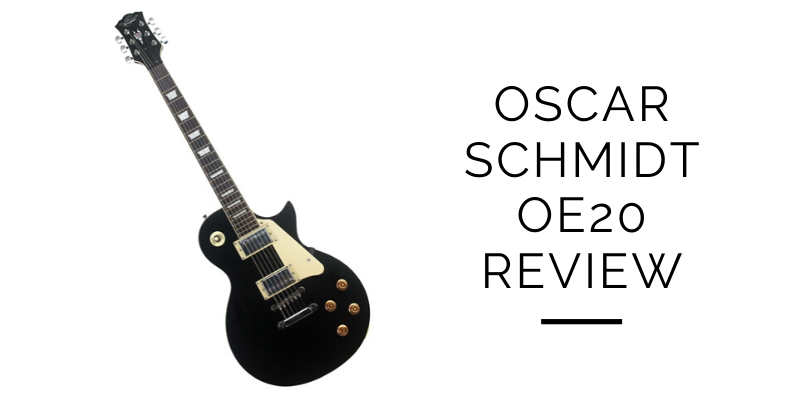 A good number of kids and sometimes even adults, pick up a guitar and get the basics quite quickly. Then very soon they often want to get an electric guitar. They won’t go to the big-name brands straightaway. But they want one that is recognizable. Some go for the Fender look-a-likes some for the Les Paul clones.

For those that follow the Les Paul route, they often go for the Epiphone. Not a bad choice. But there are other brands that are also very good and just as cost-effective. The OE 20 by Oscar Schmidt is one of them.

No, it isn’t a big name, but for the money, it is an awful lot of guitar…

This particular model has the classic single cutaway look and is finished in a stunning black. (We love black guitars – there is something so rock n roll about them). It looks the part, and even a quick assessment tells you that it’s all there.

But let’s take a closer look… 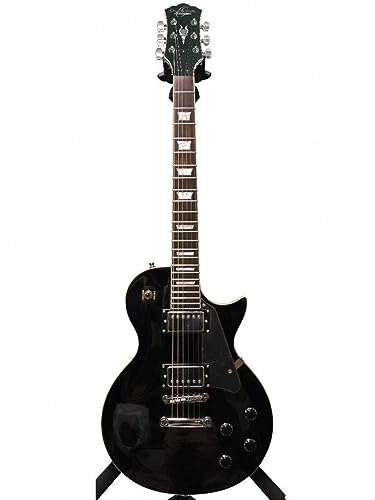 If you are expecting anything radically different in the body design, you won’t get it. That is a good thing. If you are going to produce a Les Paul look-a-like, it’s got to look like it. This Oscar Schmidt certainly does that. It is a tried and trusted and instantly recognizable shape and design. The single-cutaway body that is solid and the raised pickguard. It is a 24 and three quarter inch scale. 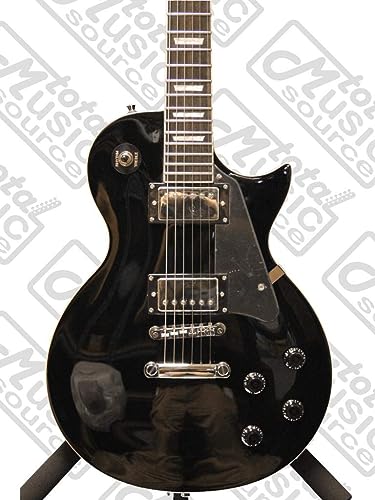 Even in construction, there are important points to follow if you want the guitar to sound anywhere near good. The use of tonewoods is important, and this has a solid mahogany body. To complete the essential tonewoods build, it has a maple veneer top, just like the originals. It weighs 8 pounds. A Gibson is significantly heavier at about 12 pounds. This makes it a lot more user-friendly for a young or inexperienced player.

The top of the body is contoured as it should be and emphasizes the overall shape and design. The look is completed with that great black finish

The body then has a good standard design and has good materials. It is well made so no complaints in that area.

Having created a body with the feel of a Les Paul, you may just as well carry on with the neck. And so they have. The neck is a maple construction that is set into the body rather than bolted on. With some Les Paul clones, you will find a bolt-on neck. You could spend the rest of the day arguing about which is better, but in our view, it depends on the guitar. Or, more importantly, the sound of it.

On a neck that is set as this one is, the transfer of the tones is better. This results in a big, warm sound. Just what you need for the humbuckers. A fat sound some call it. However, with the single-coil Fenders, the snappy sound of a bolt-on is considered by some to be better. Different sounds. With this Oscar Schmidt guitar, you have a set neck. 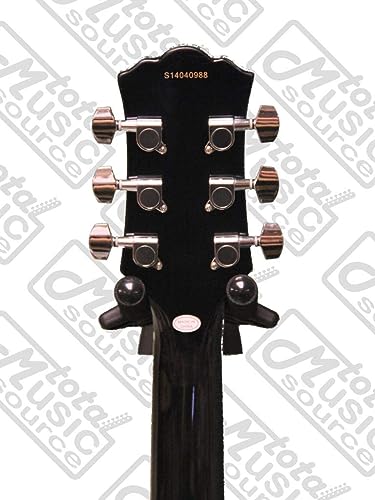 The neck has a nice easy playing profile that is very playable. It is noticeable that the neck is slightly thinner than a Gibson Les Paul. It has a rosetek fretboard with 22 frets and the standard Les Paul style trapezoid fingerboard inlays.

Rosetek is a recent innovation in materials for the fretboard. It is described as ’engineered wood.’ Not quite sure what that means. We think it may be like MDF that is used on pianos, speakers, furniture, etc., This is to replace the usual rosewood fretboard, presumably as a cost-cutting exercise. It seems to work fine, and the action is smooth and easy to play. Fret size is medium.

Does need a set-up…

Up at the headstock, they have tried to ensure the good looks are maintained with nice binding and abalone inlay. There is a truss rod for neck adjustments. There is a plate held on by three screws for access. The standard of work on the neck and body are fine. It will, though, be in need of a decent setup at first.

On shall we say, the more cost-effective guitars, it is often the hardware where some serious cutbacks are made. We aren’t going to say that the hardware on the OE20 is substantial, but given the price point, it is very acceptable.

Up at the headstock, there is a set of die-cast sealed machine heads. They are simple enough and not particularly stunning, but they do what they are supposed to do. They feel strong enough to use, and there is no apparent stiffness in the winding action. Further, they are not too slack, so keeping a constant tune should be fine.

Back down to the body and they have stuck with a Tune-o-Matic bridge design. You have to really don’t you. Also included is the stop bar tailpiece. 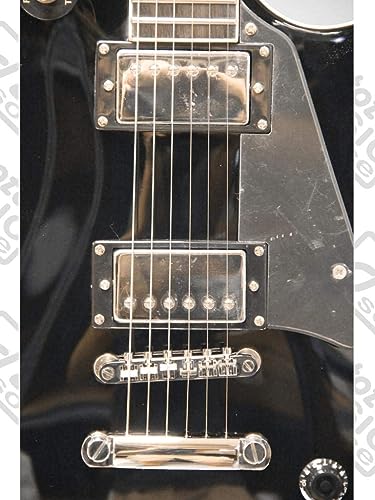 Nothing radical in this area. The standard four controls for the two pickups. A volume and a tone for each. The controls would not be complete without the pickup selector, which is located exactly where you would expect it. This is the standard three-way toggle switch.

The controls are plastic and feel a little weak, but they seem to function well.

Humbuckers on a Les Paul is not negotiable. It is part of the make-up of the guitar. It’s in the DNA if you like.

But strangely, this is an area where Oscar Schmidt might have given a little more attention. We weren’t expecting a pair of the best Seymour Duncan humbuckers, but maybe if there is a weak point in this guitar, it is here. 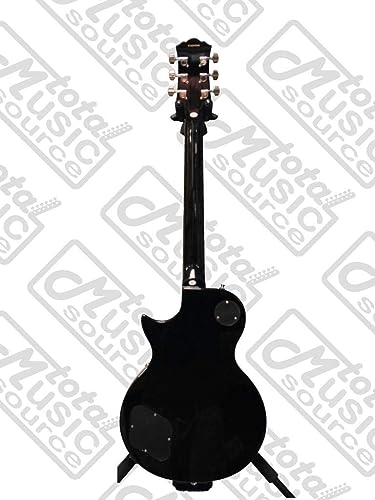 Sounds a bit thin for humbuckers…

We have two humbuckers, one at the neck and one at the bridge. They are of an unnamed Chinese manufacturer, and whilst they do give off a lot of noise, the sound is a little thin. In some sound experimentation using the pick-up selector and the tone controls, we were a little disappointed. There are settings where the sound is more like a single-coil than a humbucker. As we say, it can be a little bit thin.

We want to make the point, though, that doesn’t apply to all the settings. The neck pickup growls at you a bit and has that muddy overdrive sort of sound you expect. Even the combination of neck and bridge produces a reasonable sound, so perhaps we are being unfair. It’s the bridge pick up, which is the one where the thin sound emanates when used singly.

From a playability point of view, there are no concerns or worries. The slightly slimmer neck will be great for a starter of improver, and it has a nice feel. The guitar is balanced well and sits on your knee comfortably. As it is not too heavy, it’s easy to move around.

There was just a little fret buzz, but you had to listen hard. A slight adjustment, and that will be gone. Maybe that is unfair again as most guitars ‘out of the box’ need a bit of sorting. Playing-wise no complaints. For a budget guitar, at this price point, it is surprisingly good.

For a guitar as cheap as this, you might not expect much. We have already discussed the sound performance a little in the pickup section. We don’t want to labor the point. There are settings where it is very good and sounds way above the price range it sits in.

There are settings where it is not quite so good. The answer, don’t use them. There is enough of a near Les Paul sound in the other settings areas. You just need to drive it a little hard.

The tome controls are adequate if not exhilarating. I suppose you would call then acceptable.

The Oscar Schmidt OE20 is not the best guitar in the world. Far from it, but it could be one of the best in its price range. It looks the part with a great finish. The neck plays well, and it is a nicely balanced guitar and easy to sit and play. It is quite well made, and the hardware is acceptable.

What you have here is a guitar that is very good value for money. You will be hard-pushed to find something as good as this for the price.

The Oscar Schmidt OE20 is a guitar we would recommend. If you are a beginner or improver and like the look and the sound of a Les Paul, it is a great buy.