Pignose was initially set up in 1969 but it wasn’t until 1973 that they showed their first production mode; which was the Legendary 7-100. There had been prototypes made before this that had the rubber volume knob shaped like a pig’s nose. Not sure about the marketing value of that, but some were distributed to some well-known musicians.

It was viewed as the first electric guitar amp that was truly portable. It is highly thought of and has quite a unique sound. More on this later. It has been used on recordings by Joe Walsh, Johnny Winter, and Frank Zappa.

In 1985 Pignose Industries were acquired and are now known as Pignose Gorilla.

Over 40 years later, the Pignose 7-100 Legendary Portable Amplifier is still in production. It’s time to make a return visit to say hello and look again at this remarkable amplifier in this… 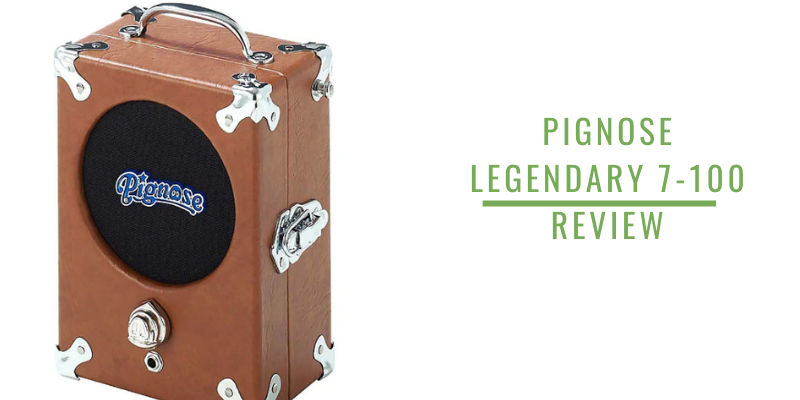 Maybe you need a portable amp to have in the house that packs a bit of a punch. Possibly you need an amp small enough to carry around with you. It might be that you’re just looking for a different guitar sound for stage or studio. Whatever the reason this little amp is going to be worth looking at.

It has an interesting design that reminds you of a bit of an old 50s valve radio. It has that jukebox look to it that reminds you of ‘Happy Days’. The ‘reminding you of the past’ look is just a very small part of the appeal of this little amp. It is a bit more than that.

After over 40 years of production and a lot of competition these days, it is still here. There must be something very special about this little beast.

So, let’s take a look and remind ourselves what it is all about… 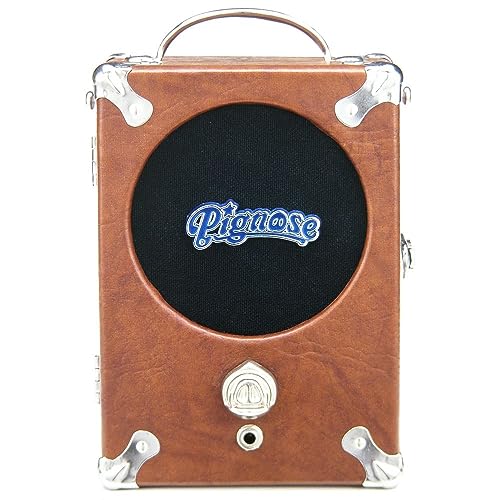 If you take a glance back in time to how things were made in the 50s, let’s say, they were tough and rugged. No nonsense stuff that was built to last. So, you are going to create a portable amp reminiscent of that time. Then it’s got to have the same feel and rugged build and look about it. They certainly got that one covered.

If you are going to build an old school product it needs an old school look. This little amp has a quality build with a tough outer covering and metal corner protectors. It might be built like a tank but at only five pounds it is still easily transported around. Small enough as well, being just 6.25 by 5 by 9.5 inches it is very portable. 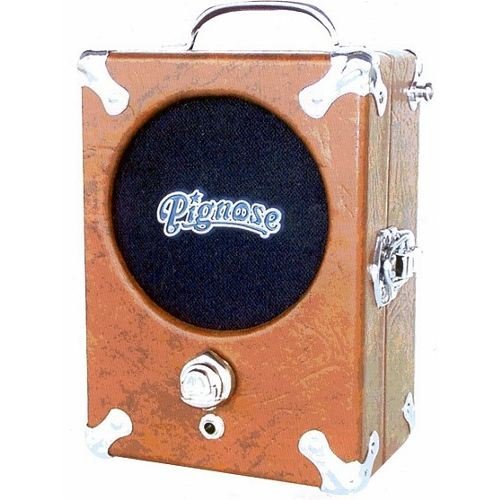 It isn’t just the body that is tough either. The insides, the speaker and the wiring, are the same. Quite able to withstand a few knocks and bumps without ‘running home to mama’.

It has a clever build design that allows you to open it and almost fold it in half. Inside there is room for some storage. Perhaps the AC supply if you have one, a guitar lead, etc. It is also very convenient should there be a need for repairs.

The forty years have not changed the basic design that much. It still has its pig snout as the off/on switch and volume control. One thing that has changed is that it is now made in China.

The Pignose 7-100 legendary portable amplifier comes with just one 5 inch speaker that will give you a power rating of 5 watts of output. There are those we are sure who may be thinking that the power rating is a bit low. Low even for a practice amp. You may be in for a big surprise. For 5 watts it seems quite loud to us.

One of the great things about this little amp is the speaker and the power that it seems to be able to put out. The speaker is what they term as ‘well-voiced’ and handles maximum power on the dial easily.

One thing that the designers at Pignose do not seem to be very interested in is controls. There is rather a lack of them. This has a positive side and a negative side. Yes, just plug and play. Turn the dial and you get sound. Simple and nothing more to worry about.

The downside is that having no controls means there are no sound options. This might seem slightly inhibiting but let us make a couple of points. This is not a modeling amp, it is a practice amp, so maybe you don’t need any extras. 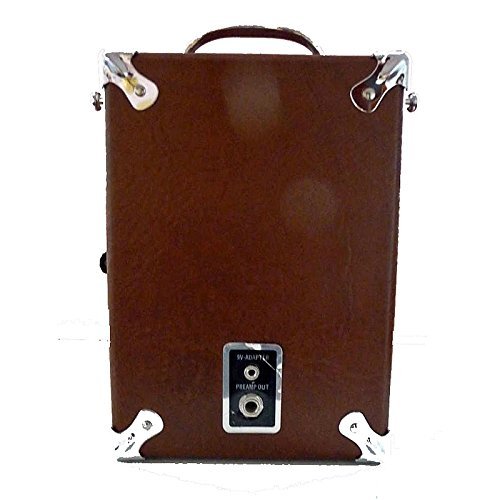 Second, do you have tone controls on the guitar?

You can create different sounds on the amp with the use of the volume control. There are two basic settings, clean and dirty These will depend on how much volume you give it. One reason this little amp has become so popular is its simplicity. To some, it will be too simple and basic of course.

On the front, there is a jack input socket. There is also an off/on switch that also serves as the volume control. On the rear a preamp out if you want to connect to an external source. There is also the connection for the mains supply if you have one.”That’s all folks” as Porky Pig used to say at the end of the cartoons, nose and all. (Sorry, couldn’t resist it.)

There are no onboard effects so no discussion on those is necessary.

So now we get down to the real issues. What about the sound? Amazingly it has a very ‘tube amp’ kind of sound. The warm tone is quite a surprise from this little speaker in a box.

We don’t think the designers ever made this amp to be played clean. You can do that of course. Around halfway round on the dial and there is your clean sound. As we said earlier if you don’t like the tone much you can adjust it using your guitar. It is a little weak and ordinary though and certainly nothing to get excited about.

There is this feeling about this amp that it was built with one sound in mind. The clean sound you might be looking for isn’t it. You have to have it of course but it’s the other end of the dial where it scores the points. The full or nearly full-on sound is what it does best. It is a rich and warm full-on overdrive and it’s not hard to see why people like Joe Walsh recorded with it.

If it is just a little too much then you can wind it down a little. Just reduce the volume and you are left with a softer overdrive. The full-on sound though has this bluesy feel to it that makes you think valve amp. It is definitely the sound you would buy the map for if a sound is what you wanted.

Anything We Should Mention?

It can be driven by batteries of course and also by an AC adapter. The adapter is not included but it doesn’t cost a lot and in our view is worthwhile getting.

The preamp out is worth mentioning again. That heavy overdrive sound can be plugged into an external power amp for live performance or recording.

It has a carrying handle. 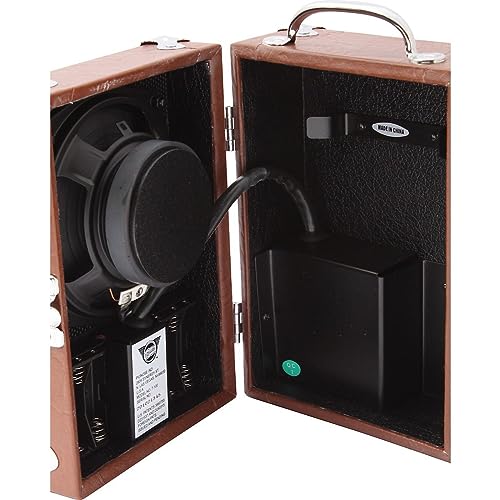 Well, you must be impressed with the good ol’ Pignose, we most certainly are. But, if you’re not quite sure and you want some other options, it’s well worth checking out our in-depth reviews of the best portable amplifiers and the best guitar amplifiers under 250 dollars currently available.

The pignose 7-100 legendary portable amplifier is not just the usual practice amp. It is a little more than that. It’s lightweight and portable but still manages to pack quite a punch. It has a great sound when it is driven hard and an adequate clean attempt for quiet practice.

The looks make it stand out in the crowd and if you still like that whole ‘American Graffiti’ idea then it certainly conjures up a bit of nostalgia. The tones themselves are a little vintage as well. It makes a nice package for a practice amp and has more than just a small square box with no style at all.

But looks and the quality of the build which is quite good are second to the sound. Are you looking for a practice amp that will deliver sweet crisp tones? If so then this little amp may not be the one for you. The sound it is best at is a blues/rock sound that is not like that at all. That is what has made it popular.

This amp has a simple design and simple controls. No-fuss, no bother. If you are looking for a good practice amp it is certainly worth considering. What may attract you, even more, is something we haven’t mentioned yet, the price point. Very cost-effective is how you might best describe it.