Pioneer has a track record of producing quality audio products that have established them as one of the most recognized brands. Established in Japan in 1938, they are still based in Tokyo. They, of course, are well-known for their home entertainment systems and car audio, both areas where they excelled.

But they have also been very active in the development of Cable TV, Laserdisc technology and the first detachable face car radio. They are always seeking to further develop their product range. And are not slow in using the expertise of people with recognized and acknowledged ability in a given field. 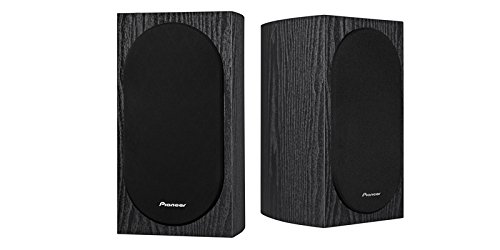 For the development of the SP-BS22-LR, they turned to their Chief Speaker Engineer, Andrew Jones. Andrew will need no introduction to those who keenly follow the technicalities of speaker development. His track record is impressive and he has become one of the world’s leading experts on speaker design.

Born in the UK as one of identical twins, he is right-handed and his twin left-handed. So you might say that he was even born in stereo. 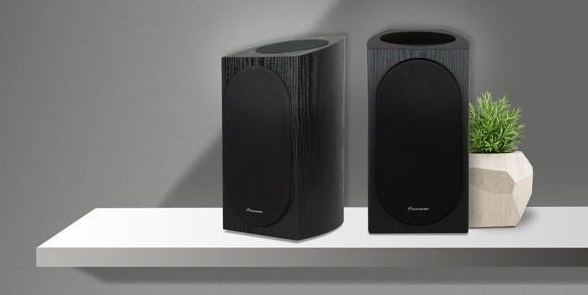 He designed everything about the SP-BS22 speakers – tweeters, woofers, cabinets, crossover networks – they are all his baby. And are they good? What would you expect from a man internationally recognized as one of the great current designers? Andrew has since moved on from Japan and is now a VP at ELAC in the US. But his legacy at Pioneer was established with these speakers.

So, let’s take a closer look…

Some will immediately recognize the design ideas that underpin these speakers. That is that they are nothing to write home about aesthetically. There is no flamboyance, flashing lights or huge great horns. Just a simple design that we have to say we find attractive in a very conservative way.

The design has taken a back seat to the performance level, and performance is what these speakers are all about.

They are made from MDF which in itself will cause discussion. Many will argue that solid ‘real’ wood is always better and they have a point. Wood will give you minimal distortion and a consistent amplification of sound. And its density will assist in its overall sound performance.

MDF or Medium density fiberboard to give its full name is a composite of resin mixed with wood fibers. It is recognized as being a good material for speakers as it will soak up unwanted energy and vibrations that naturally occur.

So you can take your choice. We like the look of real wood, but if Mr. Jones finds MDF acceptable, who are we to argue? One other thing MDF has in its favor, it is a fraction of the price of real wood.

As we look closely at the design and build we see some variations on what might be considered the usual features. They lack what is usually called a baffle at the front. The baffle normally forms the surface where the tweeters and woofers are placed. It usually also operates as a divider between the front and back to prevent collision of the sounds thus causing unwanted interference. An interesting design feature. 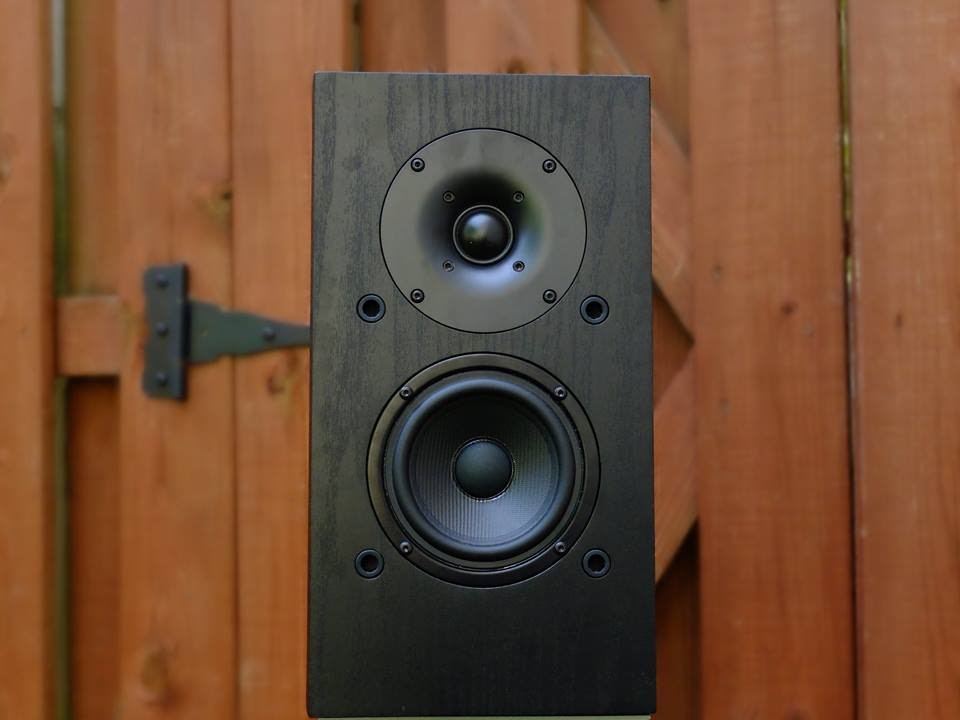 In place of a formal baffle, for all components generating sound each has its own surround.

They employ a cabinet design that is curved which helps the reduction of unwanted sound waves inside the cabinet. This contributes to the overall sound performance. The speaker grilles (commonly known as the ‘running tracks’ because they resemble a 400m track) are removable so you can use the finished aesthetics of the cabinet design or view the drivers in action.

MDF is the construction material but they are completed with a plain black imitation wood grain finish. As we said it is understated but the plus point is that it won’t have a problem fitting in with the home decor.

The design says bookshelf speaker, but at nine pounds for each, we think that a wall-fitted bookshelf will need to be stable to hold these. They are a compact design and measure 12.55 by 7.12 by 8.45 inches and so are sized to comfortably fit a bookshelf.

The cabinet design and aesthetics are simple and this will either appeal to you or otherwise.

The design is dominated by two very visible speakers. A one-inch soft dome tweeter and a four-inch woofer. The woofer has oversized magnets which help to drive the cone. They have added a structured surface to the woofer to enhance its bass accuracy. And the pole piece is vented improving the low frequencies even more.

The tweeter has a specially created custom waveguide that widens its sweet spot increasing its efficiency. 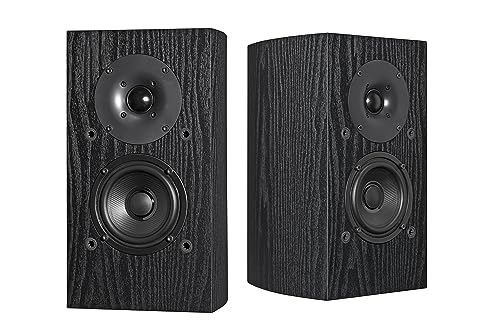 The crossovers, of course, take the signal and split it into high, mid and low frequencies. Achieving good separation is vital to creating a great sound. Normally you would expect to find two-way crossovers in most speakers, so these are pushing the boundaries for sound creation, especially at their price point.

We have already mentioned the curved design of the cabinet. This is not an attempt to make it visually interesting or different, though it must be said it does. The curve towards the back helps to break up any standing sound waves that may be inside the cabinet. A move towards extra clarity of performance.

Connections on the rear are self-explanatory, and banana plugs can be used if you choose.

We mentioned earlier about the performance level. When Pioneer and their Chief Speaker Engineer at the time sat down to plan the design of these speakers it appears that the main criteria was sound performance. Everything else came after.

The sound quality is very good…

Is there anything about the sound performance that is worthy of criticism, however slight, then the bass may be a bit underdone. It is clear and articulate and certainly doesn’t get lost in the mix, but doesn’t quite have the power and drive that we would prefer.

This is because by using a four-inch woofer, instead of maybe going for something more powerful, you don’t quite get the depth and range. Having said that a bigger bass presence would interrupt the flow of the rest of the frequencies. And maybe they would then have to be increased, and so starts a spiral that is not conducive to designing great speakers.

They are a brilliant speaker system with a performance to match the plans that were no doubt laid for them.

As a pair of bookshelf speakers in their price range, they are probably unbeatable. In fact, they will compete favorably with speaker systems that are considerably more expensive. They easily punch well above their pricing weight.

What we really like about them is their flexibility of use. They will make great speakers for your home entertainment system. But in that role, they don’t have to be on a bookshelf they can also be wall-mounted. It should be remembered though that they do weigh a little over nine pounds each.

We conclude that these are probably the best value speakers in their price range and possibly in a couple of price ranges above. The design is plain and simple, but the performance outstanding. With these, Pioneer has got everything right, and if you try to find something you dislike, you’ll actually find it very difficult.

If you want an amazing set of speakers for whatever your needs are, then look no further. Pioneer and Andrew Jones have done a brilliant job. Highly recommended!