When you think of an electric guitar, there are probably three different models that come to mind. And, undoubtedly one of those is a Telecaster. The very first commercially released solid-body electric guitar was the Fender Telecaster. This guitar changed the world of music with its sound, tone, and playability.

Since its introduction in the 1950s, the Telecaster has remained a standard-bearer of electric excellence. In the following decades, very little changed with regards to the design and the distinct sound of the Telecaster has continued to endure.

What did change, was the Fender Company itself. In order to remain competitive in the ever-expanding realm of electric guitars and Far Eastern manufacturers flooding the market with ‘Fenderish’ guitars. The company was forced to create a spinoff brand called Squier. 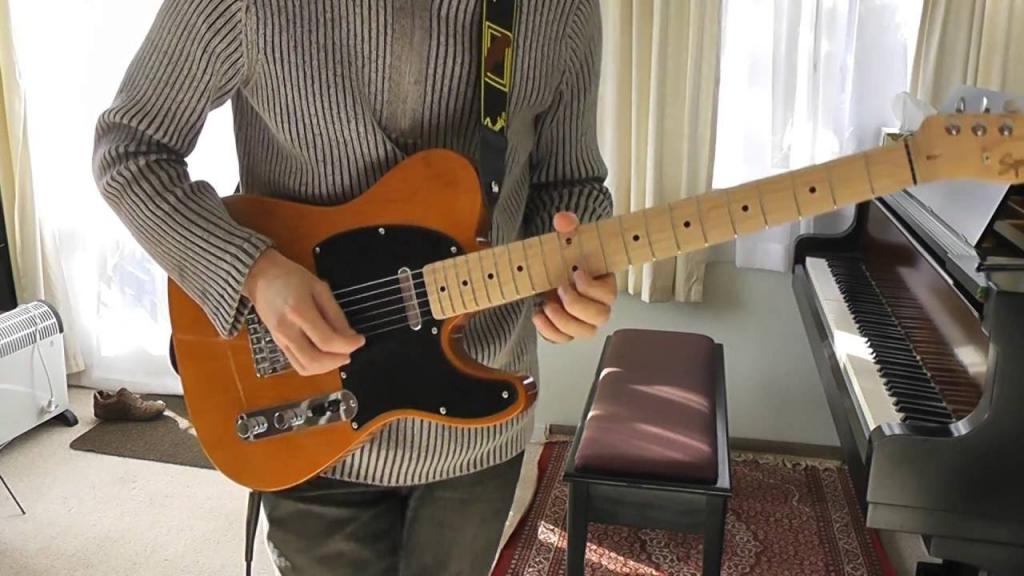 So, what was the difference between them…

Squier guitars are more modestly-priced than the Fender guitars made in the US. They do, however, offer the same design, look, and feel as American-made Fender guitars but are slightly less defined in their sound. The difference is actually quite subtle. With only the most experienced players, and those with highly-trained ears, being able to tell the difference between a Fender and a Squier.

For those guitar players just starting out. Or for those who are well-versed, but more flexible, about how their guitar sounds right out of the box. The Squier Affinity Telecaster is an iconic recreation that will bring mountains of joy to your playing.

So, we invite you to take an in-depth look at the Squier Affinity Telecaster and will let you be the judge…

The wood used to make a solid-body electric guitar has quite an impact on the sound and tone. The original Fender Telecasters were made from either alder or ash. The Squier Affinity Telecaster stays true to its roots by using alder for the body construction.

Alder is commonly used because it is inexpensive and plentiful. The tone of alder body guitars is quite balanced, tending to be a little bit bright but still warm and very woody. 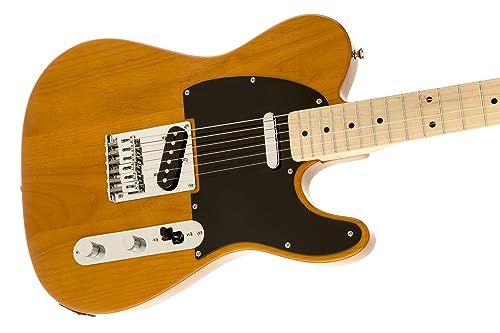 The Squier Affinity Telecaster uses three to five pieces of alder to build the body, depending on the country where it’s manufactured. The construction and assembly are quite good on this guitar. Even if you are using a magnifying glass, you are unlikely to see any of the wood joints.

The body is even, smooth, and sturdy. The finish is a poly-urethane butterscotch blonde, but is available in several different colors and finishes, including Sunburst and Arctic White.

Following in the tradition set forth by the original Telecaster. The Squier Affinity Telecaster features a solid piece of maple for the neck. Maple is a very dense, hard and heavy wood. It is a wood known for its brightness, long sustain, and lots of bite.

The neck is also designed with the same “C” shape found on all Telecasters. This gives you greater amounts of comfort and ease of playability because it is contoured to the shape of your palm.

For the Squier Affinity Telecaster, the neck is slightly thinner at the top when compared to American-made Fender Telecasters. 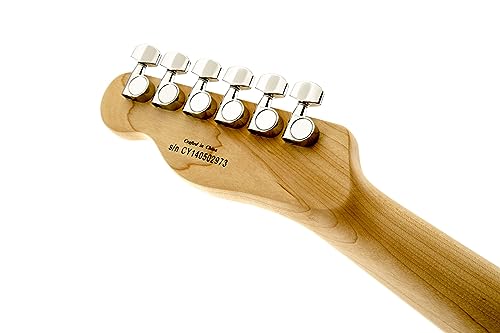 This subtle difference can affect your playing if you are someone with long or large fingers.

Just a little detail to keep in mind..

Like the original, the Squier Affinity Telecaster uses the maple neck for the fretboard. There is no fretboard set on to the neck. This further enhances the brightness and bitey-nature of the maple.

And just like its predecessor, the neck is bolted to the body. This design offers greater stability, intonation, and strength when compared to necks that are set-in. Plus, it’s far easier to swop a neck out if the unthinkable happens and you break it.

One of the most distinctive aspects of a Telecaster is the type of bridge that is used. That shiny metallic square is quite possibly the most iconic feature of a Telecaster.

The first Telecasters used an “Ashtray” bridge. The strings were loaded through the body and over the saddle. In order to load the strings through-the-body, the body needed to be a single solid piece of wood.

Here is where the Squier Affinity Telecaster is noticeably different from the original. Because the Squier Telecaster is made using three or more pieces of wood, it could not be designed with through-the-body string loading. 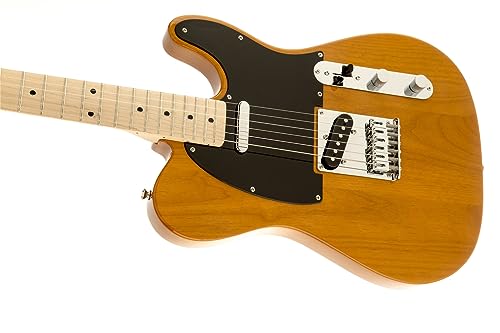 To ensure the Squier Affinity retained the classic appearance of a standard Telecaster, they employed a six-saddle top-loaded bridge with a square, chrome-plated base mount.

Why does this matter?

While it looks very similar to the original Tele bridge, the six individual saddles and top-load offer a slinkier feel to your playing. This because the angle that the strings break over the saddles is wider than the original Telecaster bridge.

The difference is in the playability and action. But, there is no discernable change in the overall tone and sound.

One advantage the six-saddle bridge has over the original is that it is much easier to adjust the action on each string.

The classic bridge had only three saddles, where each saddle worked on two strings at the same time. Including a six-saddle top-loading bridge helps ensure the intonation, action, and playability are more acute and refined.

The Squier Affinity Telecaster features two single-coil Tele pickups. These pickups were specifically designed to capture the original tone and sound of the first Telecasters.

The neck pickup has the classic appearance of a vintage soap bar Telecaster neck pickup with the sleek chrome covering. This pickup gives you warm and rounded tones. The lows are full, the mid-range is even, and the high-end has mellow clarity.

The bridge pickup is a loud and twangy single-coil that spanks and sparkles. The mid-range tones honk and snap. The low-end is crunchy and full — the high-end rings, stings, and bites.

These pickups are not an exact replica of the original Telecaster guitar pickups, but they do follow the design. The difference is usually in the weight. American-made Texas Special Tele and Classic Tele pickups are heavier than those found in the Squier Affinity.

Basically, the heavier Telecaster pickups have more wire and windings, which gives them their weight. The result is more fidelity from the pickups with the extra wire.

Now, this doesn’t mean that the Squier pickups can’t give you the unmistakable Telecaster tone. They most certainly can. However, with less wire around the magnets, the overall power is slightly reduced.

The difference in volume power will only be noticeable when playing through large, high-gain amps. Otherwise, if you are using a small practice amp, you are not going to notice the output difference.

The bottom-line is that the Squier Telecaster pickups are going to give all the twang and raw brilliance you would expect from a Telecaster.

Squier guitars tend to get an undeserved bad reputation, but this has more to do with “purists” being more vocal about their opinions than your average guitar player.

Every guitar made by Squier is designed by Fender. Only the construction and assembly are handled by the Squier company. You can rest assured that the modern Fender Company would not involve themselves in any inferior products.

For the novice, the hobbyist, and the semi-professional guitar player the Squier Affinity Telecaster is a wonderfully inexpensive option. And, will give you the unique sound, style, and playability of a Telecaster.

There is no question that Squier has worked diligently to provide you with a true Telecaster experience. This guitar is so versatile. Its sound and tone are genuinely twangy, bright, snappy, and full.

For those that are looking to make their first steps into the world of electric guitars, the Squier Affinity Telecaster won’t lead you astray.