It is always a pleasure to look at a product from Yamaha. The world’s largest manufacturer of musical instruments, they produce quality at affordable prices. They also provide with their pianos what are considered, along with Kawai, the best concert grands in the world.

When Yamaha builds an instrument, they get it right, especially with their guitars. They had been making guitars since the 40s, but it was only in the 60s they released them to the world. They are now recognized as one of the best at every level. If you see the words Yamaha acoustic-electric you know it’s going to be good.

So, let’s have a look at a fine example in this Yamaha APX600 NA Thin Body review…

The APX600 demonstrates how Yamaha is able to continually produce quality guitars. Another example of great quality and craftsmanship at an affordable price.

The Yamaha APX 600 is quite a new addition to the Yamaha range. Nevertheless, it has become extremely popular in a short time. It follows in the footsteps of the APX500 111, which was and still is a well-thought-of instrument. However, a few enhancements have been made to the APX600. 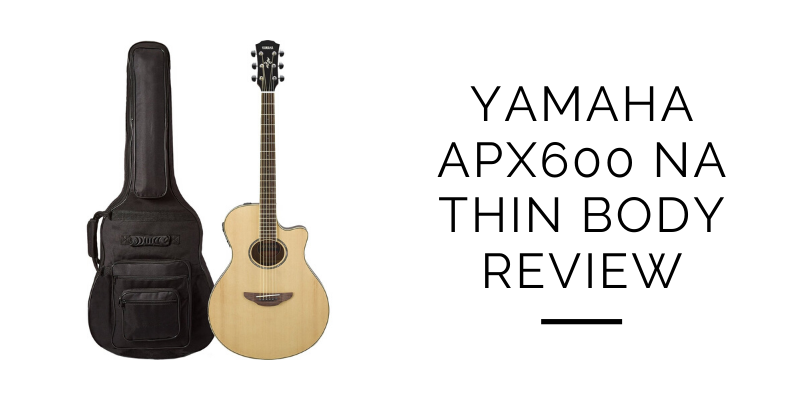 It follows the now established Yamaha traditions of giving a warm, rich sound and an easy to play feel. They also always look good with an upmarket styling. And this instrument will satisfy a lot of requirements. It’s smaller body size, and thinner neck make it ideal for a beginner. It also suits an electric guitar player who wants the acoustic-electric sound.

Yamaha has used three-ply Nato wood for the back and the sides of the body. Nato is also known as Eastern Mahogany. It is used a lot these days as it looks very similar to standard Mahogany and has the same tonal characteristics. The top is Spruce but not a solid piece of wood; it is laminated.

Inside the body is an improved scalloped bracing system. This is one of the big differences between the APX600 and its APX500 predecessors. The redesign has resulted in a much better bass response when it is played acoustically.

Easy to get on with…

The body design is similar to a standard dreadnought, but it is a little smaller and much thinner. This makes it a lot easier to hold and play than a full-size dreadnought shape,

The APX600 has a cutaway giving access to the full playing length of the neck. However, having a cutaway on an acoustic reduces the bass. Guitars with a cutaway tend to produce a brighter sound and are a little treble-heavy. With no cutaway, they often have a better bass response and a fuller sound. The redesign of the scalloped internal bracing has gone some way to alleviating this, adding some bottom end.

Oval not round…
Check Price on Amazon

Further assistance to a fuller sound is the inclusion of an oval-shaped soundhole, which enhances the response of the low end and the lower mids.

The sound hole is given an attractive abalone rosette. The body has been given ivory and black binding. There are white dots on the bridge pins. The whole effect is finished off with a glossy finish.

It is an attractive looking guitar and with its cutaway and oval soundhole very distinct.

The neck is made from locally sourced tropical Nato and has a Rosewood fingerboard. The Nato has been given an attractive satin finish. The overall scale length has been reduced to 25 inches from 26 inches. The string spacing has also been made slightly narrower.

Again these are slight modifications to the APX500 range. Yamaha says that these changes improve the playability. That might be true for younger players but not for players with larger fingers. This leads us to believe that they hope this guitar will move towards the student and younger player. 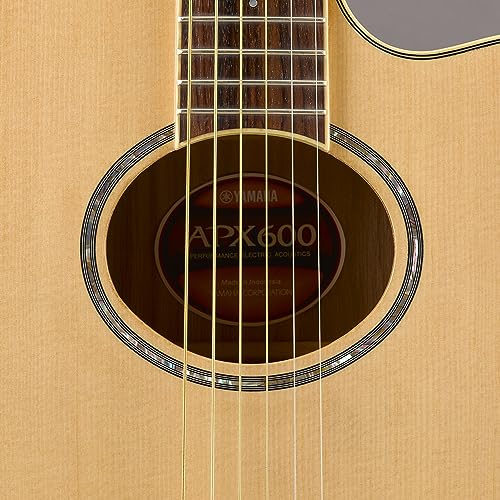 There are 22 frets which are easily reached thanks to the cutaway. There is a truss rod fitted if there is a need for adjustment.

Simple enough, with no surprises. At the stained Nato headstock with name and insert, there are die-cast chrome-plated sealed back machine heads.

The bridge is made from Rosewood.

As an acoustic instrument, this is so far a very well made guitar. But it is when the electrics come into play that it scores big points. When you want to plug in your guitar and use amplification, you’ve got a good setup to work with.

The improved system on the APX600 includes a System 65a preamp redesigned piezo pickup. It is the standard Yamaha SRT transducer. It is located under the saddle. The saddle is the ideal place for a pickup on an electric-acoustic guitar. The saddle helps the vibrations of the strings to the pickups. Effectively you are picking up the sound at source. The sound reproduction is, therefore, more natural and uncluttered.

The same pickup that is used on Yamaha’s respected ‘A’ series of guitars it delivers a crisp and punchy sound.

The controls are basic and easy to operate but rather packed together. They are located on the top of the guitar for convenience. They feature a volume control and a very basic EQ. This only consists of three knobs to increase lows, mids, and highs, as well as a mid-range frequency slide control. It is, though, a significant step up from a simple tone control.

There is a battery indicator light and a built-in tuner, which is a very welcome asset.

The inclusion of an EQ system with a little more than just a tone control is important for this guitar. This is because when amplified, it has a tendency to overemphasize the top-end. You, therefore, need to be able to reduce the treble frequencies and bring up the mids and lows.

Once you have mastered that, you get a very good electrified sound. It has no excessive feedback, but it can boom a bit if you go overboard with the lower EQ frequencies. It will be different for every amp of course, but it shouldn’t take long to find the sound you are looking for.

We first came across a Yamaha acoustic some years ago. It was in Tempo Music in Hanwell, West London, just down the road from the original Marshall shop.

We weren’t that impressed at the time. The owner Geoff said, ‘come and try this, it’s from Japan.’ ‘Where’ we all laughed.’ We had a go. The sound was ok, but the action was far too high and stiff, and the body finish was less than adequate. It took Yamaha about a year to get it right. Then it was a case of ‘got any of those Japanese guitars in?’ They had arrived. 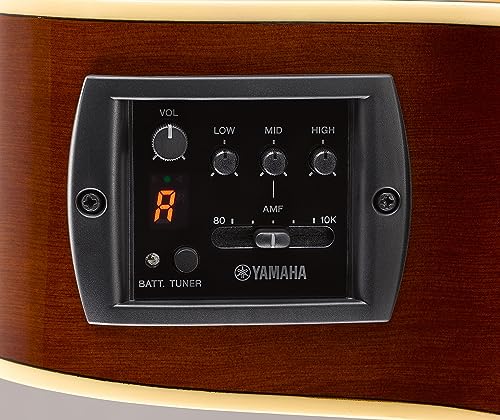 Back to the review…

The Yamaha APX 600 is a Thinline acoustic-electric. The thinner style body certainly makes it easier to play, especially for a young player or starter. It is easy to pull up close to your body, and shorter arms get round it much easier.

We have mentioned the neck being thinner as well and the problems this can cause. Great for learners but will need an accuracy of finger-positioning if you are an adult. No bad thing really.

Good marks then for how it plays. It is easy, comfortable, and well-balanced. Its Thinline body a big asset to its easy style.

Some might disagree, but a thinner body doesn’t always mean the sound can’t be rich, warm, and full sounding. Some will point out a thinner guitar cannot have the same resonance, especially with bass sounds. People might also point to the cutaway bringing the bottom end down even more.

They would be right, of course. There is no way that a Thinline with a cutaway can sound like a big Dreadnought. But let’s consider this – may be the Yamaha APX 600 isn’t trying to sound like that?

It is its own guitar…

Designed with ease of playing in mind but still able to produce a nice sound. The upgraded internal bracing has added a bit to the bottom end, which has helped. It has a nice well-rounded sound and acoustically is a great sounding guitar.

The electrics on board are excellent as we have said already, but they must be managed. So used with an amp, it sounds good if you can accept that it is not going to sound like a guitar with another naught behind the price tag. It is a solid performer and typical of the Yamaha quality you get for an affordable price.

If you’re not sure if this is the Yamaha for you, check out our in-depth reviews of the Yamaha Pacifica Series PAC112V, the Yamaha FSX730SC, our Yamaha FG 700s review, and our Yamaha APXT2 3 4 Size review.

If you’re looking for even more options, it well worth taking a look at our reviews of the Best Acoustic Electric Guitars and the Best Hollow Semi Hollow Body Guitars currently available.

Yamaha, yet again, has done spectacularly well, mainly due to the sound they have managed to coax out of a Thinline body with a cutaway. It shouldn’t sound as deep and as warm as it does. But it has that nice balanced acoustic sound to it that makes it sound way above its price point.

It is easy to play and comfortable to hold. This makes it an ideal guitar for a new player or a starter. The thinner neck adds to the ease of playing for smaller hands. It also encourages good technique and accurate position of the fingers for experienced players. As we mentioned earlier, this is no bad thing.

It is an upgrade of what has gone before it, but Yamaha has managed to maintain the things people loved the most about the early versions. The slim body and basic style are very similar. If you liked the originals, you are going to love this.

We haven’t mentioned the price point yet. In case you think it will be through the roof, it isn’t. For this quality, it is a great price and very affordable. This is a great guitar for all purposes, and you will find it hard to match the quality and price elsewhere,

If you are looking for an acoustic-electric, then the Yamaha APX 600 a very good buy.