Yamaha is one of the worlds most respected piano brands, and its Yamaha Arius YDP 181 easily proves why.

In today’s review, we’ll be judging how good this piano really is, because, as you probably know, this baby does not come cheap. So if you’re going to be spending a lot of hard earned cash on one, you’d better be sure it’s worth the investment. And we’re here to help. 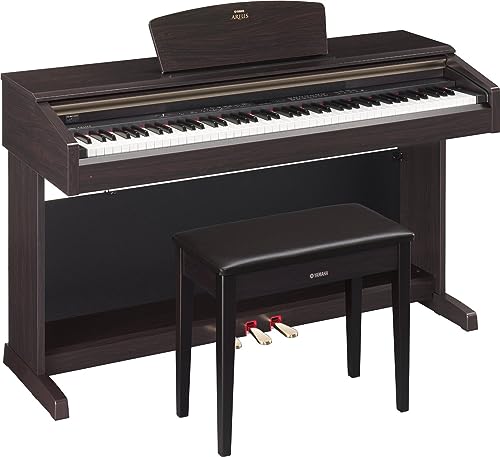 Yamaha Consoles are a unique line of pianos with a characteristic look and feel. They are typically very elegant, large in size, with a cabinet similar to an actual acoustic piano.

The engineering is also, of course, top-notch, which makes them some of the best pianos in the market.

In fact, when Yamaha describes this line of pianos, it mentions that they are made with fantastic wood cabinetry which hails from a “legendary heritage in piano craftsmanship”.

Now, to the Yamaha Arius YDP 181 itself…

This isn’t a portable keyboard if that’s what you’re looking for. It’s actually more of a home piano and the beautiful cabinetry it comes with easily proves that. 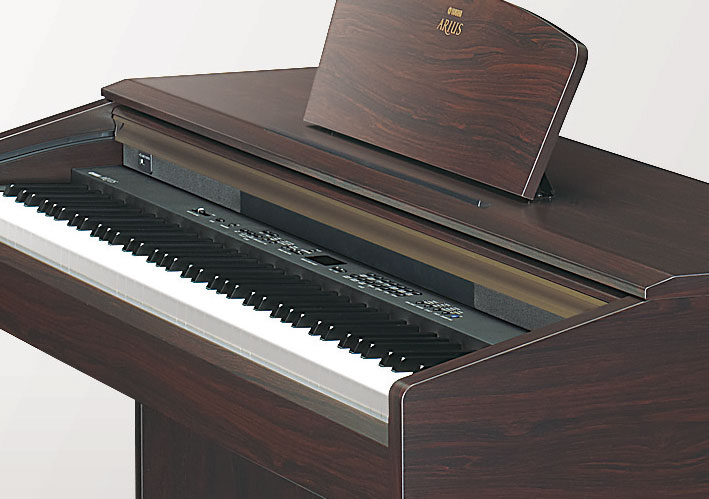 Furthermore, it bears a very strong resemblance to a grand, so, it’s going to need to stay in one position.

Nevertheless, this is a piano that Yamaha designed to be usable, by just about any player with any level of skills.

You’ll find that the Arius YDP 181, just like every other piano in the Arius series, comes with 3 pedals – soft, damper, and sostenuto. And, of course, it comes with 88 full keys with Graded Hammer action.

Furthermore, on this piano, you’ll be able to half-pedal which gives you more options with the sustain. And in addition, there are also layer and recording functions as well. 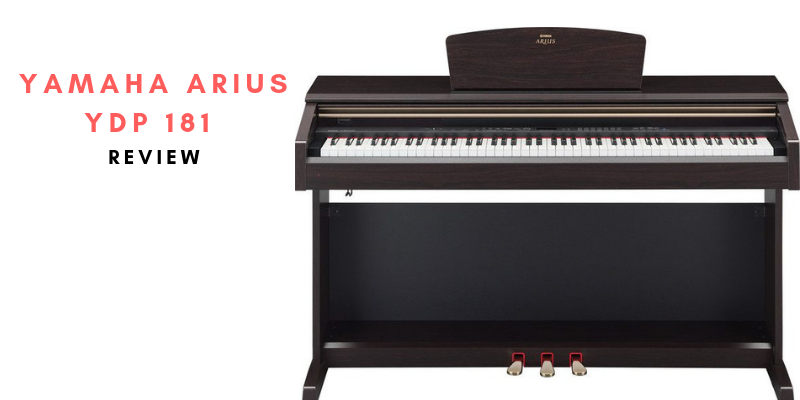 Features Of The Yamaha Arius YDP 181

You only need to look at the Arius YDP 181 once, to realize that it’s an exquisite work of art. When you think of Consoles, you should naturally think of stunning aesthetic appeal. And on that count, the Arius YDP 181 more than delivers.

It comes with a beautiful finish in dark wood, embellished with a gold lining. Yep, you heard right, the lining is gold. And that’s not all that is gold. The three pedal unit is also in gold.

Thus, we can confidently say, that in the aesthetics department, at least, the Arius YDP 181 will easily give, just about any other piano in the market, a run for its money.

But that said, this is a big piano. And by “big” we mean big! In fact, at 110 pounds, this might just be the heaviest digital piano we have ever come across.

Again, with dimensions spanning 53 inches in width, 20 inches in depth, and 35 inches in height, you should already know that this is going to need a dedicated spot in your home. Needless to say, it is not a piano someone who’s tight on living space should be considering.

Another brief education about Consoles for the uninformed…

Consoles generally do not come with a vast array of tones and voices. So, don’t expect them from the YDP 181. In fact, it only comes with 14. And many less expensive pianos come with a lot more.

But enough of that and let’s see how these sounds fare.

Well, the grand piano sound is excellent. And it should be. It was obtained from some of Yamaha’s world-class concert grand pianos. Now, combine this with the powerful sound engineering Yamaha put into the tone generation, and you understand why this sounds so amazing.

Alright, here is the rundown of sounds you can find on the Yamaha Arius YDP 181.

However, there’s a slight issue here. Unlike most Yamaha models, even some entry-level ones, which come with little hammers in them to simulate an acoustic grand feel, the Arius YDP 181 lacks that. Yep, there are no hammers here.

Well, if we’re being totally honest, the action of this piano is still absolutely wonderful even without the hammers. In fact, if you’re not a really experienced piano player, you might not even notice the absence of the hammers.

This digital piano comes with Yamaha’s AWM Dynamic Stereo Sampling System. Now, this isn’t Yamaha’s most recent tone generation technology. And we do wonder why Yamaha chose to use it here, considering how pricey this model is.

However, that said, it does not mean that the slightly older technology used, takes away from the overall performance of the piano. It doesn’t.

Now, what exactly can the AWM Dynamic Stereo Sampling System do?

Furthermore, the fact that this tone generation system, is almost instantly recognizable when sounded on any piano, places the technology among the greats. Old version or not.

Moving on to the polyphony now…

Now, with its max polyphony of 128 counts, this piano features a polyphony that’s more than sufficient for beginner and intermediate players. But we are a bit disappointed.

This is because, at this price point, Yamaha could have afforded to give us at least a 192 polyphony.

So, yeah altogether, the polyphony is sufficient, but it could have been higher. 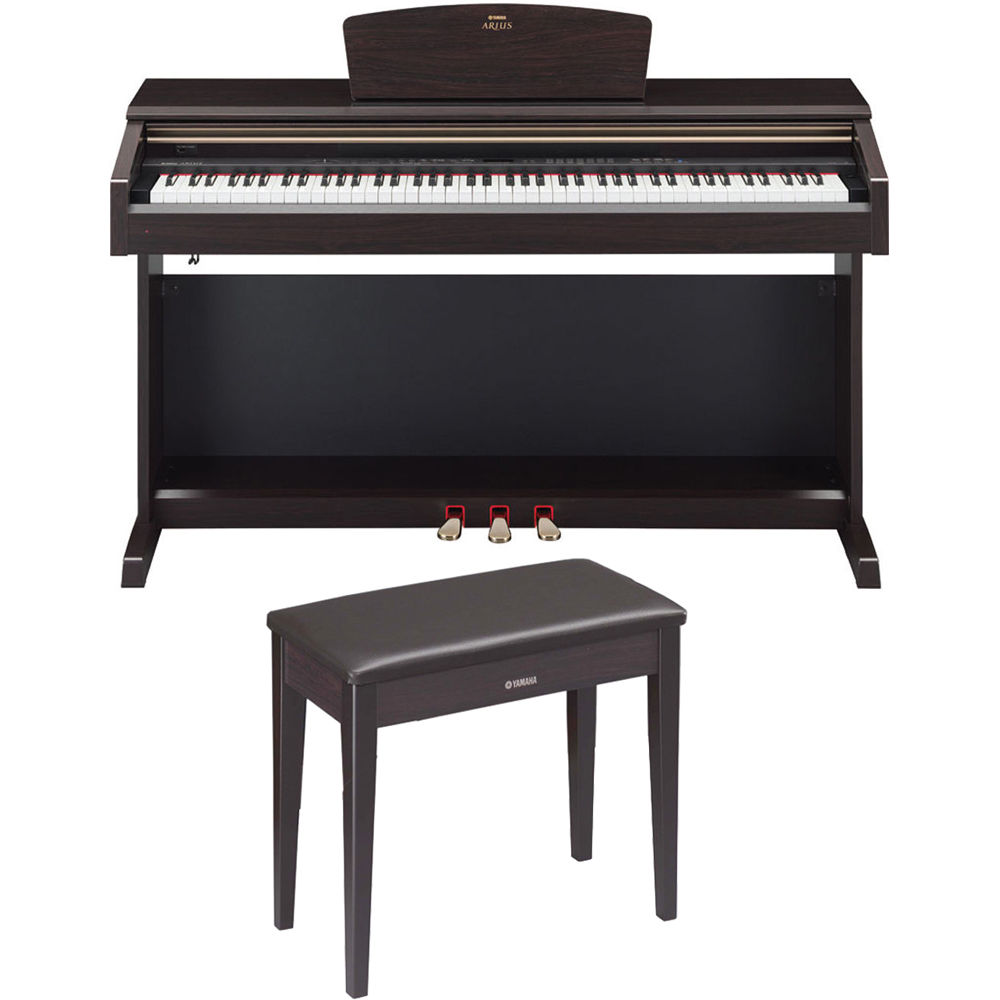 The Yamaha Arius YDP 181 comes with USB connectivity. This, therefore, means that you’ll be able to move your personal compositions from your piano to your computer for further processing.

Even more, the USB connectivity can help to complement the recording function.

The recorder lets you record up to 3 songs. But with the USB connectivity, you’ll be able to create your song using several functions including the tempo controller and metronome.

The Yamaha Arius YDP 181 is obviously made to be a family piano. Also, if you’re looking to step up your game form a portable keyboard, this is for you. It’s low maintenance, and you’ll find that this piano grows with you as you get more adept with your skills.

Will we recommend this to a pro player looking for the closest thing to an acoustic piano in a digital piano?

No, nothing has been able to beat actual hammers just yet and the polyphony count is too low. Hence, for now, this piano remains for the serious beginner.

But would a beginner be able to afford this, is the issue.

If your a serious beginner, with the funds and want to take their piano playing to a whole new level, then this could be the piano you’ve been looking for.