The Yamaha MM8 is one of the legendary Japanese brand – Yamaha’s – hobbyist level workstations. Its design is based on the original MOTIF workstation and everyone knows the MOTIF synths. They are simply world class.

But whether you can also expect such class from the MM8 is what you will find out from our review today. In total frankness, the MM8 is good but it could have been a whole lot better. Great sounds, a rich arpeggiator, intuitive controls and more are present quite alright. But, a deeper look might reveal a few other places on this synthesizer where Yamaha could have done a better job. 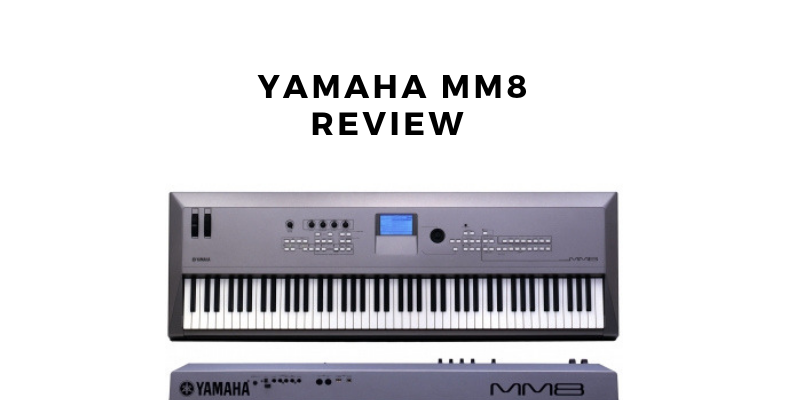 Who Is The Yamaha MM8 For?

Alright, first things first, this keyboard might be pricey but it sure isn’t for professional playing. And the features of the keyboard will easily show you that. In fact, we will peg it no higher than a hobbyist synth at best, albeit a high-end one. And, in our opinion, it just might not be worth the high price for that too.

Now, here’s the thing. There are very few beginners who are willing to part with anything close to a thousand bucks for an instrument they just started experimenting with. And even if some are, such people would be looking to get something with lot of bells and whistles. If you’re one of such, the MM8 is not the one.

Hence the reason it does not belong to the cadre of entry level keyboards. Like we said, this is a hobbyist keyboard at best.

But anyway, this is a very light keyboard which is a big advantage since it will be easy to move around. And in addition to that, there are also some major pro-level features. For instance, the arpeggiator setting is so rich. And the vast array of sounds and effects is truly impressive.

However though, like even the best things, this keyboard does come with its downsides. Problem is, except you’re just a casual player or a hobbyist, it would be almost impossible for you to overlook them.

So, ultimately, this is a keyboard for the player looking for something to grow with. But if you really need something either as a beginner or a pro, we feel there are better options within this price range.

Features Of The Yamaha MM8

The design of the Yamaha MM8 is nothing so special. It’s made of plastic. But it’s not the most stylish looking keyboard on the planet. But then again, the keyboard was first developed in 2008. So, you might understand that.

But then again, the keyboard comes with a pretty great keybed. The keys come weighted and they also feel firm under the fingers. But still, they maintain a really tactile action which is pretty interesting.

This keyboard comes with a Graded Hammer action which means that they feel heavier on the lower ends and lighter on the higher ends. Piano players especially will love this but not everyone might. Most synth players might prefer much lighter keys.

So, like we said initially, there isn’t much to ooh and aah over on the build of the Yamaha MM8, at least, in the build aspect.

Of all the features of the Yamaha MM8, the arpeggiator is its best and most impressive feature. The arpeggiator mode is so rich and robust, it almost makes the MM8 feel like a pro-level synth. Check it out…

There are a staggering 213 different rhythmic arpeggios on this synth. And truth be told, you’ll find only very few pro-level workstations that come with this many arpeggios. So, this is a definite pro. Plus, in this array, you’ll also find a great host of rum loops and bass patterns as well. 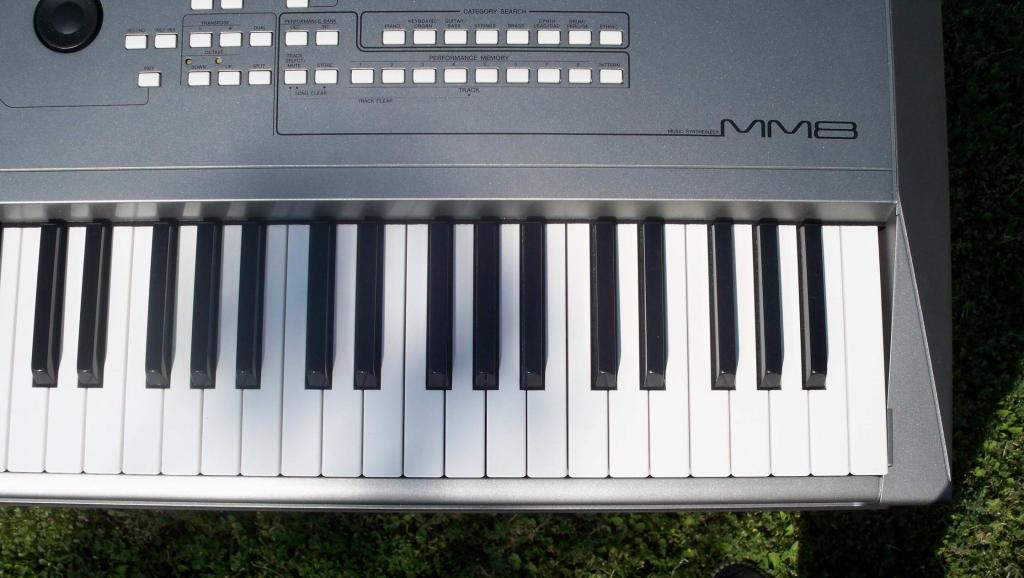 Another really cool feature is the guitar emulator. Most synths always come with really boring and uninspiring guitar patches. In some extreme cases, they even sound completely horrible. But the story is different for the MM8.

It sounds really smooth and you can hear all the nuances of a guitar that makes the patch sound very realistic. It’s one of the realest sounding guitar patches we’ve ever seen on any keyboard.

In fact, if you load the guitar patch in the arpeggiator, you can even simulate some strumming sounds that sound really convincing.

The controls are another meh feature of the MM8 but it covers the basics, though. You have loads of controls to make a host of customizations possible. You can customize your sound, attack, release, and filters very easily.

Also, you’ll find it super easy to hook this up with a DAW, no stress no worries.

The Yamaha MM8 comes with pretty good performance settings. It does give the player a certain level of control and versatility that we like. Here’s what you can do with the settings?

For one, the settings let you swap between sound sets in an instant. Even if you’re in the middle of holding down a note. Also, you’ll be able to store some individual settings as well. For instance, you can store settings like sound presets, effects, keyboard layout and drum patterns.

Plus, you can save up to 64 performances in total on the keyboard. And there’s also the option of even saving more performances when you use your USB drive.

But that’s not all you can save. You can also store up to 5 whole tracks on this keyboard. And with a USB drive, the number stratospherically increases to 400. So, what does this mean for you? This means that you’ll be able to upload your complete composition up to a DAW where you can fine-tune them further.

In modern times like these, these are features a keyboard maker can’t afford to skimp on. And Yamaha did get this one right.

Also, the MM8 can also work as your MIDI controller keyboard. How? You just use your USB cable. And with this cable, you’ll be able to drive software elements on your computer such as your soft synths.

So, this keyboard comes with a 32-note polyphony which will naturally make any serious player a bit disappointed. Casual players might be less concerned, though. This isn’t a make or break thing for them.

However, for the non-hobbyist, Houston, we have a big problem! For those who need this keyboard to play live with will be frustrated by the lack of flexibility a limiting polyphony brings. You won’t be able to layer sounds to your taste or create beautifully textured sounds either.

For many, this is a huge deal breaker and we can’t blame them.

But it’s not all bad, though, there are still quite a few good things about the Yamaha MM8’s sound engine. The engine does help to create some really nice sounds. The strings and pad are actually pretty high quality just like the guitar patch we talked about before.

And besides these, you’ll also find a wide plethora of effects at your fingertips which you’ll find easy to control. Actually, each of them has its individual control which is what makes the effects so easy to control. And, of course, it affects the quality of sound you get in a positive way.

Lastly, if you want to generate real focused sounds, there are all kinds of effects to help with that. There’s the Master EQ, the reverb, flanger, chorus, and a host of other quality effects too.

Now, what’s the bottom line? Overall, this is a good keyboard, and its fantastic sounds and beautiful guitar patch makes us absolutely impressed with this keyboard. Plus, the arpeggiator is really great. You’ll enjoy working with its various settings and effects very much.

Of course, the 32-note polyphony will be a bit limiting for most players. And if you search, you’ll find that many other competitors offer keyboards with much better features than the MM8. And that’s just being honest.

But in the end, Yamaha did a decent job. Now whether you’ll love this or not will be largely dependent on the kind of player you are.