The MO series is Yamaha’s affordable, workstation series and it’s a perfect compromise. The compact size and light weight making the keyboards in the series very portable, while still delivering on performance.

The MOXF8 is one of the more expensive keyboards in the MO series.

Since the inception of the MO series, Yamaha now releases an MO version for every workstation it produces. So, after the Motif XF was released, guess what followed?

Of course, the MOXF!

Today, we’re looking at the MOXF8 workstation, and there’s a lot to talk about… 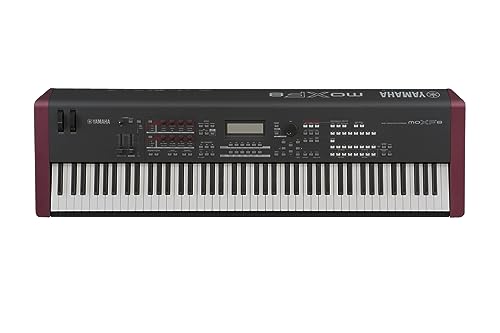 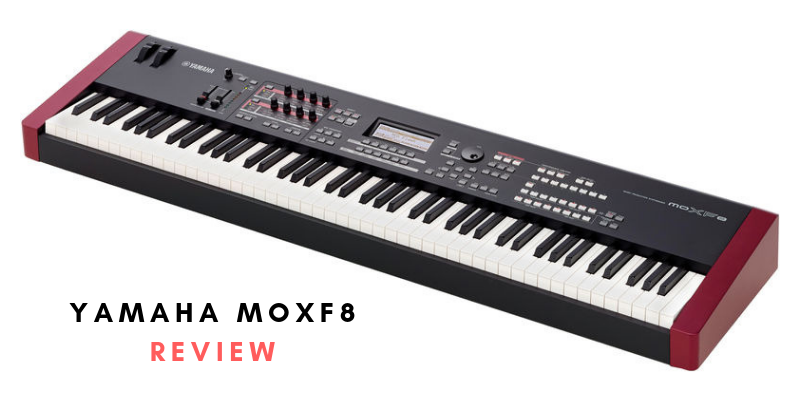 Features Of The Yamaha MOXF8

The MOXF series contains two different keyboards versions – the 61-key and the 88-key. Today, we are looking at the 88-key variation.

We understandably, can’t go into all the features of this wonderful piece, in this one article. But we’ll definitely do our best to go through the major features. Let’s start with the design and overall looks of the instrument. 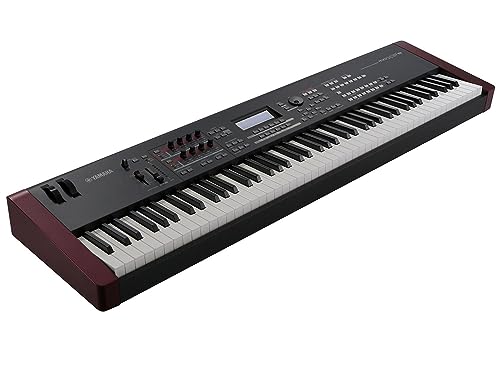 On the surface, it looks a lot like its bigger brother, the Motif XF workstation. There’s actually, a massive resemblance between the two. But understandably, there are some downgrades here and there, to make the MOXF8 lighter and more affordable.

One of these is on the chassis, where you’ll find that Yamaha chooses plastic. By doing this, Yamaha significantly reduces the weight of the MOXF8. So, making it much more lightweight than its older sibling.

Yamaha also placed the Modulation and Pitch wheels at the upper-left side of the panel. They also took the power unit out of the chassis. And chose to use an external adaptor instead.

All these factors add up to a really brilliant workstation that’s not only good looking but very portable.

Well, there’s a lot going on the interface of this workstation as you would expect. There’s an LCD display with a backlight dead center and two faders, one for the DAW Level and the other for the Master Volume.

Let’s delve a little deeper into the controls. 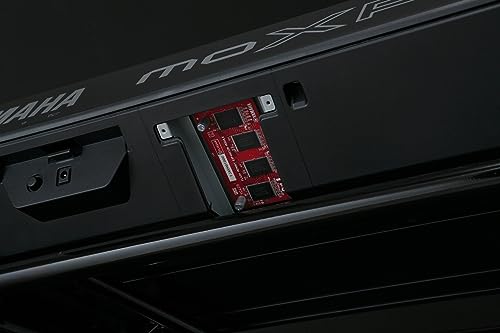 Besides all this, there’s a knob that adjusts the volume at the aux input. Then close to that, you’ll find a section of knobs and buttons. These help you manage the different parameters for EQ, amp simulators, tone, and sound effects.

The transpose and octave, each has its own specific button. And is excellent, because it makes the MOXF8 great for live performances.

Alright, in addition to all these other controls, you’ll find two other sections – one for the Seq (for Sequencer) Transport and the other for Effects. Let’s talk about the ‘Seq Transport’ section…

The benefits of the Seq Transport section become obvious when you need to control your multitrack sequencer, making its functionality effortless.

And it also helps you to control any DAW connected to your workstation. Allowing either your Mac or PC, to be controlled by the six transport buttons available in the Seq Transport section.

One last stop, on the right side of the keyboard. Where you’ll also find loads of other buttons. These help you navigate through the plethora of sounds and other options available.

As well as that, these buttons also help you to split sounds or layer them, as well as turning the arpeggiators on and off. 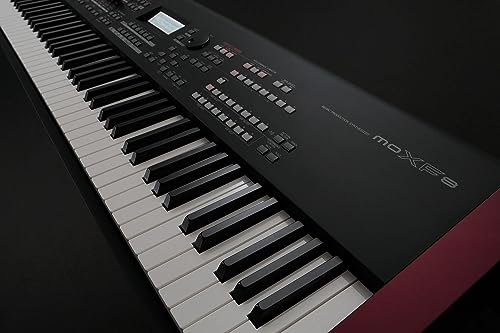 The Yamaha MOXF8 features a fantastic sound engine. In fact, it’s the same as is featured on the Motif XF- the AWM2 sound engine. Coming with wave samples measuring up to 741MB, as well as Expanded Articulations.

The MOXF8 comes with virtually every sound you know and love, in the Motif XF.

Now, to the polyphony, the MOXF8 has a 128 count maximum. And in addition to this, features a multi-timbral capacity of up to 16 parts.

And to make things even more interesting, Yamaha packs way over 1150 tones into this machine. Awesome!

And how about the Virtual Circuit Modeling engine? It’s excellent. With it, you’ll be able to easily layer up your voices seamlessly. The engine has the ability to layer, as many as 8 voices simultaneously. And then add some special effects to each of them as well if needed.

Now, another great feature of the Yamaha MOXF8 is that it comes with an internal ROM that’s actually expandable. So feel free to add as many third-party sounds as you like using the Flash Memory slot.

And guess the max capacity? 1GB! That means that you have access to 1GB of space to include as many additional voices as you like.

This is one of the Yamaha MOXF8’s biggest advantages. 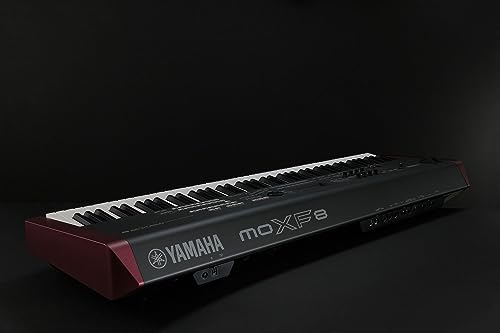 The Motif XF actually allows you to install two flash memories instead of one, as on the MOXF8. But it’s also quite heavy.

With the MOXF8, you get a huge array of exceptional tones at your fingertips, but, it weighs and costs a lot less than the Motif XF.

We don’t know about you guys, but that’s a compromise we’d take any day. The portability the MOXF8 affords alone is a huge advantage.

Of course, consumers seriously love these keyboards. But Yamaha’s competitors are actually kinda doing a bit better here, like Korg, with its NH hammer action.

The Yamaha Graded Hammer Standard action (GHS) still provides a great variety of nuances and dynamics. But we can’t say that this is the best keybed for the MOXF8. At the price this workstation goes for, we think Yamaha could have given it a better keybed.

We can’t go through all the features of the MOXF8, but we can’t end this review without talking about the Arpeggios section.

This feature of the MOXF8 is simply incredible. You can get up to 8000 phrases from it?! This is truly amazing. Plus, you can use them either for a live show or in sequencer mode.

Alright on to another interesting feature of the MOXF8…

There are many kinds of instruments and genres available on the MOXF8. But, here’s the impressive part: you can actually add any groove you want to the 16 track sequencer in an instant!

So, now you can create pieces of any level of complexity. Just put down your rough idea and then add other patterns and instruments as you go. Then soon, you’ll be on your way to your best piece yet! 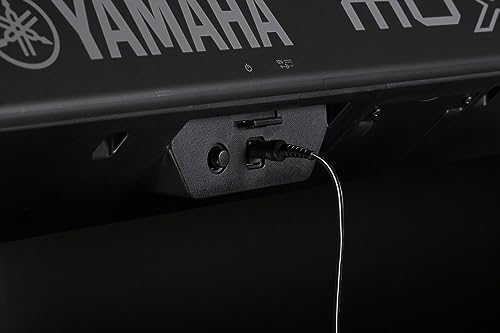 Of course, there’s also the option of editing these patterns as you go. And you could choose to add other effects as well. When it’s time to put the finishing touches to it, you can easily connect to your PC and seamlessly access your music software.

But, this workstation is also good by itself. Even without connecting it to any external device, you can happily start and finish your song on the MOXF8 alone.

Overall, the MOXF8 makes a fantastic choice for any musician looking for a workstation within the intermediate price range. Developed by Yamaha, this workstation comes with the companies characteristic mark of quality.

Perhaps its most impressive features are its 16-track sequencer and the option of expanding its internal memory. But as cool as these are, there are other exciting features that all kinds of musicians will enjoy.

And what makes this even more amazing, is that the instrument is still compact and lightweight. So, it’s really portable. Altogether, Yamaha could hardly have done a better job on this. We love it!