The Yamaha P45, as well as other pianos in Yamaha’s P series, has become a keyboard of choice for many novice pianists around the globe.

Considering the realism and high quality that Yamaha is known for, it’s obvious why the P series has thrived. Today, I’ll be reviewing the P45.

Upgraded from the P35, the P45 comes with many outstanding features which we will review today. Read on to find out what these features are and why you need them…

But first, let’s begin with some specs… 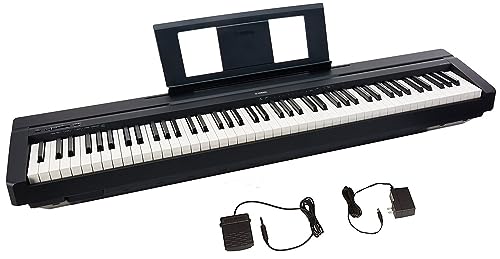 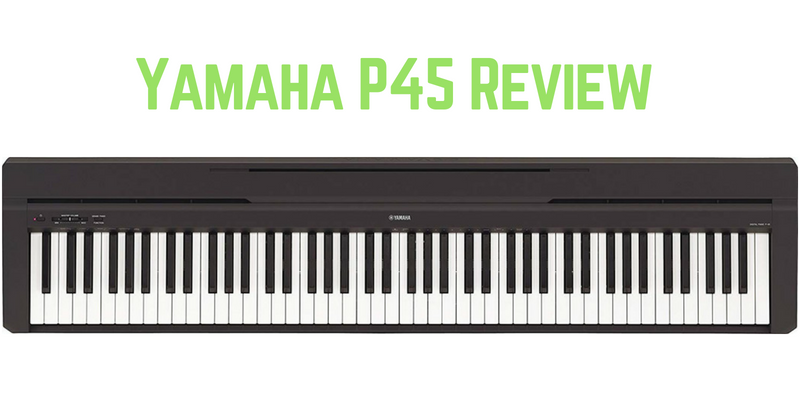 Features Of The Yamaha P45

The Yamaha P45 and its predecessor, the P35, both look identical.

Both feature 88 piano keys with Yamaha’s Graded Hammer action and come with built-in speakers. Regardless of the number of keys, they are still quite compact. And weighing in at only 25 pounds, they are light for a weighted keyboard.

The P45 is a flexible and versatile keyboard ideal for home, stage or studio. Its portability making it easy to carry between all three.

While on the subject of traveling with your keyboard, I would recommend getting a padded bag. It doesn’t come supplied but is invaluable in keeping your P45 in great shape as you travel.

The P45 is designed to be easily placed on any surface or any standard keyboard stand.

The control panel on the keyboard is super simple and very straightforward to use. Featuring two simple buttons, plus a knob for volume control.

The first control button is the power button, to switch the keyboard on and off.

The second is the function or grand piano button. And this is used to access the various sounds on the keyboard – the Grand Piano and others.

If, however, you want to access the other sounds, you will have to simultaneously hold the function key and some other keys. Most entry level keyboards work in this way, so the average beginner should be used to it.

As for color, it’s only available in black.

The hammer action is good, especially for the price, and it does give you the basic feel of an acoustic piano. 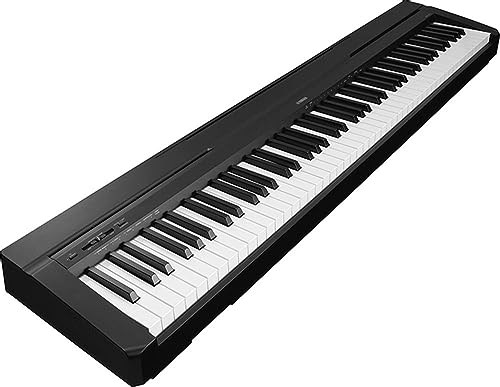 So what does Graded Hammer Standard action really mean?

Well, it means that Yamaha actually uses tiny hammers inside the piano, making the keys fully weighted. Semi-weighted keyboards, use springs instead.

This hammer action is what you find in acoustic pianos. And is the reason that keyboards are heavier to touch at the lower end and lighter at the high end. As you would find on higher end pianos.

This is a very touch sensitive keyboard. So, in essence, you can change the timbre of sound you get depending on the intensity of your touch.

There are four preset sensitivity settings on the keyboard which are the fixed, soft, hard, and medium.

The medium, which is the default setting, gives the most natural feel. While the fixed setting ensures that you get the same response however you strike the keys.

The hard setting gives you the widest range of response.

The Feel Of The Keys

Don’t expect a high end feel the same as ivory and ebony keys. These keys have a somewhat plasticky feel as they do not absorb moisture unlike their ivory and ebony counterparts.

They are, however, finished in matte, so your fingers won’t slip off as you play, unlike glossy keys.

In all honesty, these keys could have been more realistic but at least they aren’t very noisy.

Okay, on to the most important aspect…

The Sound Of The Yamaha P45

In order to give the P45 the high quality, acoustic piano sound it has, Yamaha uses its patented AWM sampling technology.

Yamaha obtains its sound samples from an actual concert grand piano. So, the sounds are basically mini digital recordings of that grand piano. And are, therefore, quite realistic.

However, if you’re looking for a keyboard with a wide variety of sounds, the P45 is not for you.

The sounds available are only the basic ones which are great for many beginning players. But intermediate players may want more variety of sounds.

If you want to create a deeper, more expressive sound, then add some reverb. There are 4 types to choose from-  Stage, Hall 1, Hall 2, and Room.

The Reverb is quite basic but has different levels to adjust its depth, from zero to ten.

But, that’s about it for sound effects. So, if you were looking for something more, the P45 is not for you.

The speakers are powered by two amps with a power of 6 watts each, producing a sound loud enough to fill a small room. That’s great for practicing or playing to a small audience consisting of a few people.

But, if you need this keyboard to perform live, then you definitely need to connect it to an external amp, or PA system. Or you’ll be the only person who can hear it.

Generally, the speaker sound quality is acceptable, even when at maximum volume.

But for the best sound, you should consider getting quality headphones. The sound is better and the experience is more immersive.

This keyboard also comes with a transpose and fine tuning feature which allows you to change the pitch. So you can play in different keys, which is great for beginners.

The P45 has no recording or playback function. But there is a USB port. Enabling you to output from the keyboard into any music recording software you like.

Altogether, this is a well put together keyboard. It does lack a few features here and there. But, of course, that’s to be expected in a super affordable, and portable piano.

It’s pretty much like the Yamaha P71 in many ways and you could also check that out. But if you want my opinion, the Yamaha P45 is an excellent keyboard for the price and if you’re starting out as a pianist, it’s a great choice.