Founded in 1887, Yamaha has become the largest manufacturer of musical instruments in the world. They may be best known for their world-class Acoustic Grand Pianos. These fine instruments grace many of the world’s top classical music venues.

They are also well-known for just about every other instrument you can think of. Their involvement in the world of guitar manufacture started slowly, with their first guitars came off the production line in the early 1940s. Their first dedicated guitar making factory came in the late 1940s, and their first instruments were semi-classical guitars with nylon strings. They only sold them within Japan.

But then something happened that had not happened before and will not happen again. This occurrence made Yamaha look at other markets throughout the world. There was a chance to satisfy a demand that was growing fast. 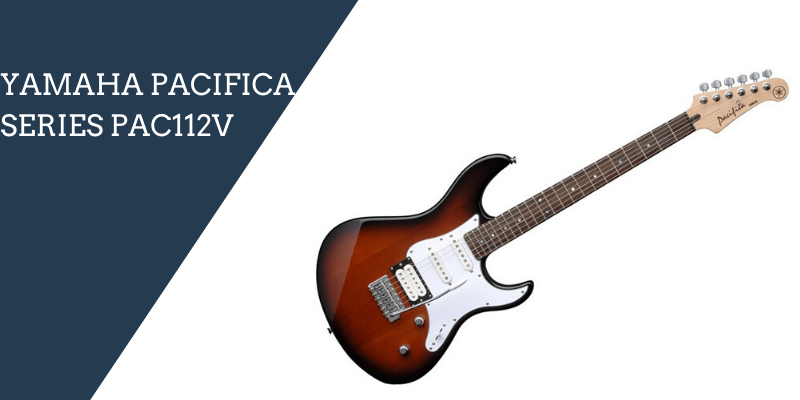 What happened? The Beatles…

Regular guitar manufacturers were left behind and couldn’t keep up with the demand. Along came Yamaha with their first steel-string Dreadnought style acoustics and shortly after electric guitars and basses.

Yamaha had arrived. They have continued to thrive, made dramatic improvements in the quality of their guitars, and are now a respected brand. Their guitars have been used by some notable players, including Carlos Santana. So. let’s take a look at one of the guitars from an extensive range — the Yamaha Pacifica 112v.

First launched in 1990 this range has developed and improved over the years. When you go into the guitar shop, the assistant is likely to recommend a Squier or something similar. You have been looking longingly at a Fender Strat on the wall. Squire is the obvious choice. They could, of course, point you in the direction of the Yamaha Pacifica.

In fact, they should send you the Yamaha way. It actually has more to offer than the Squier in many ways. It has a reputation for being one of the best guitars at its price point, so let’s have a closer look… 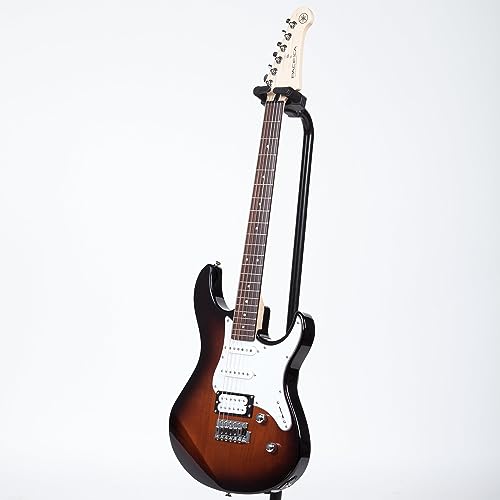 At first glance, the visual similarity to the world’s beloved Stratocaster, You could be forgiven for thinking it was just another Strat copy. But it is so much more than that. The body design has that famous double-cutaway Strat look, but there are some differences. It has a few extra curves, and the horns are a little longer. A little bit like a cross between the Burns guitars of the 60s and a Strat.

The body is made from a solid piece of Alder shaped into the style. Alder is a good choice for a budget guitar, it may not have some of the qualities of mahogany or maple, but it doesn’t cost those prices either. It is finished in a near sunburst design they call ‘Old Violin Sunburst.’ Highly polished to a gleaming finish, it is impressive.

The elbow rest familiar to the Strat is beveled to make it a comfortable playing experience. And the familiar Strat style scratchplate in white is included.

It has a 25.5-inch scale neck with 22 frets, Because of the deep cutaways, the full-length of the neck is playable. It is built in that great C-shaped design that allows an ease of playing and a smooth transition up the fretboard.

The neck is made from Maple wood and has a bolt-on design. It has an attractive, very light satin finish to give the neck a sleek impressive look. This is an upgrade to some other models in the Pacifica range that the 112V offers. It is finished off with a Rosewood fingerboard. 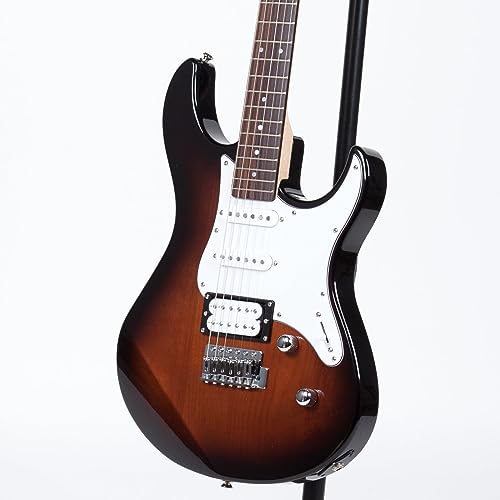 Yamaha likes to describe the pickup formation as an HSS configuration. There is no great technical mystery in that. It simply describes the layout of the pickups as they are fitted on to the guitar. That is Humbucker, Single, Single – HSS.

What you get then is a humbucker in the bridge position. And then two single-coil pickups in the middle and neck positions. Whatever style you are going to play on this guitar, having a humbucker in the pickup configuration is an asset. It certainly isn’t something that Squier offers on their basic models. And not something that most other manufacturers offer in this price range. 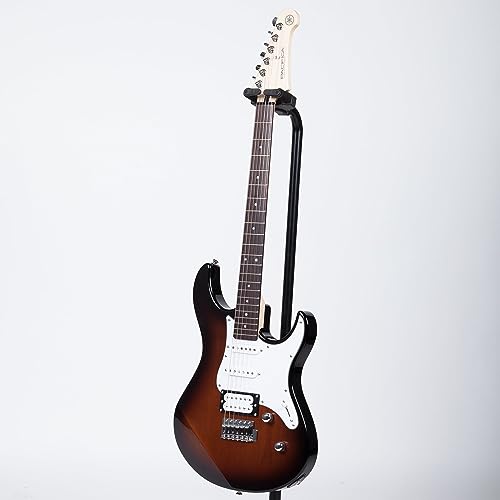 That chunky humbucker also has a coil-split option. We have to say we are not sure why give that there are already two single-coil pick-ups on the guitar. Maybe it just gives you an extra tonal option from the bridge pick up. More options are better than none.

The pickups are a stock issue and nothing fancy. Having said that, they make a decent sound. More on this later.

The humbucker is a Yamaha Alnico 5 at the bridge position. At the neck and in the middle positions are single-coil Alnico pickups. Quite an array of potential sound options which we will discuss soon.

Most guitar manufacturers seem to have an unwritten law about production priorities. Whether this is true or not, we don’t know, but there seems to be a pattern. Firstly, make sure the guitar is playable and made with decent materials, secondly, make sure it sounds as good as you can make it sound.

If you are trying to produce a decent guitar at a budget price cutbacks, have to be made somewhere. If it’s not in the build quality, how it plays, or the sound that really only leaves one area. The Hardware. This is an area where budget guitars are at the weakest.

The tuners are a standard form of die-cast machine heads. They are reasonably precise but certainly nothing to get excited about.

Yamaha seems to have borrowed a few ideas from Fender with the hardware. The bridge has a tremolo design reminiscent of a bygone age and has six adjustable saddles. It has to be said that it might be the guitars weak point. It’s not the best bridge you will see on a budget guitar. 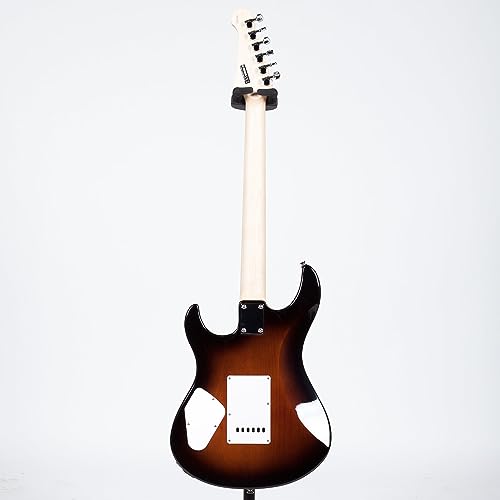 Bridges that are built with individual saddles are fine if the bridge is well-constructed. If it’s not, then the young beginner is going to have fun with their intonation. We are not sure that a more simply constructed bridge might have been better for this guitar.

Considering that it is a budget range guitar, the hardware is acceptable and what you might expect. However, with the rest of the guitar being so well-made and put together, the hardware does look a bit cheap.

Very basic, of course, which for a beginner player is a good idea. There are just one volume and one tone control, and they service all three pickups. They will give individual tones and gain to each pick up if selected individually. Tone control then is at a bit of a premium with such limited options.

There is a pickup selector switch, which gives five options for pickup selection. Also, the push and pull control to operate the coil-split. For a starter or beginner, they are simple to get to know and easy to operate.

Now we come down to the important issues. We see so many budget guitars that are so poorly made they are virtually unplayable. And that isn’t just an Asian manufacturing problem as some like to believe.

So how does the 112V play? It has to be said, as a budget instrument, very well. It is comfortable and nicely balanced and not too heavy for a young player. The beveled edge at the top of the body is an asset and adds to the overall comfort level. The neck feels good and is comfortable to hold, the ‘C’ shape giving it a certain ease and comfort level.

Recognizing the price point of this guitar, it plays very well. We were concerned with the intonation, but the bridge setup was reasonable, and the tuners kept it in tune.

There are no complaints at all.

When placed in the context of the price and the market it is aimed at, it is very good. You can only say that it can pack a punch.

We mentioned earlier about the pickups being stock items and possibly a bit ordinary. This is the case, but the sound they produce is very good and puts this guitar well above its price point. For a young guitar player setting out the humbucker, addition gives it an added bonus. The sound is thick and heavy with overdrive. It is the sort of sound that is going to enthuse a starter or beginner.

If Yamaha has set out to design and build a starter guitar that is full of variety, then they have succeeded. Its versatility is one of its big plus points.

The Yamaha Pacifica 112v isn’t the best guitar in the world. And if we are honest, it may not be the best at its price point. You can get Squier Stratocasters at a cheaper price. The question is, are they better than the Yamaha? Well, they don’t have that humbucker, for one thing, so the sound of the Yamaha has got the edge. The playing feel of the Yamaha. It is very good, but we are not here to make a comparison.

The fact remains that this is one of the best starter guitars you can buy. It plays well, looks great, and the sound is a big surprise. Limited tones are a little disappointing, but that is more than made up for by that growling Humbucker. It has a lot of variety built-in to its design, especially with its sound, so it’s good for most things.

It’s good value for money and a great starter guitar. A lot of people go for the tried and trusted Squier, but maybe you should try the Yamaha Pacifica 112v? We don’t think you will be disappointed.