The Yamaha YDP-103 is currently one of the most affordable console pianos you’d find in the market. And it is also Yamaha’s lowest end digital piano with a cabinet. It might not be as popular as its big brothers – the YDP-143 and the YDP-163, but that doesn’t mean that it does not have its pros.

Yes, the Yamaha YDP-103 is actually quite basic without the kind of features that could hold a candle to its successors. In fact, it’s pretty much like Yamaha just took the easy road and made the P45 into a console piano by adding a cabinet.

But it’s hard to beat the YDP-103 if you’re looking for a sub-$1000 traditional-looking piano that can work as a family piano. So, as we take a closer look at this piano today, we hope it helps you make an informed purchasing decision.

But before we head into the full review, here’s the bottom line for those who can’t spare the time. 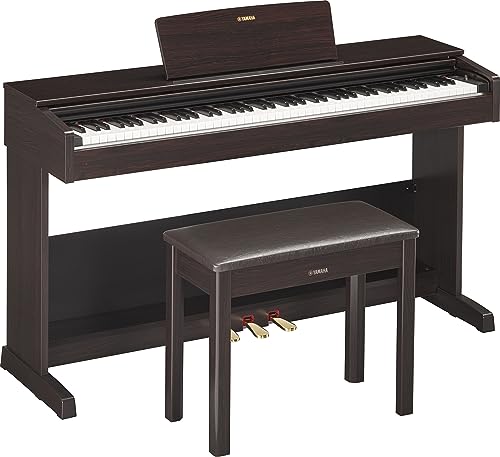 Bottom Line For Those In A Hurry

The YDP-103 shares features and properties very similar to Yamaha’s portable piano – the P-45. So, generally, it is a great entry-level piano that could also work if you need something to play as recreation.

However, this piano does come with a lot of limitations that will frustrate any player at an intermediate or pro skill level.

Just like its big brothers, this only features 10 built-in tones. But at least, the YDP-143 and the YDP-163 have the lesson mode, MIDI recorder, split function, and other such features going for them. The YDP-103 has none of that. 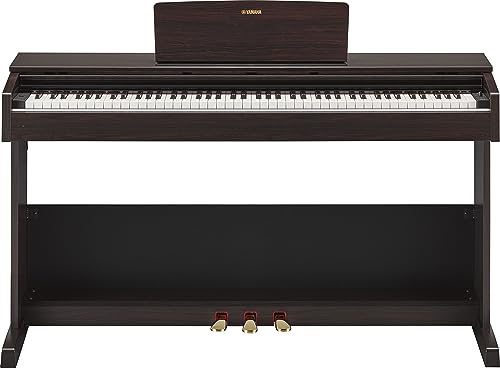 Moreover, Yamaha uses its most basic sound engine and hammer action keyboard on the YDP-103 as well. So, yeah we would say they are pretty decent considering how much we’re paying for this piano. But then again, they fail to give this piano the realism and sound quality that advanced players may be looking for in a piano.

So, in all, we would say that you should consider the YDP-103 on one condition. That is, if you liked the P-45 but are also looking for something more traditional-looking.

And now to the full review…

Features Of The Yamaha YDP-103

Like we mentioned in the intro, the Yamaha YDP-103 comes in a very basic design. And it also requires assembly pretty much like all console pianos. But the assembly process is actually quite easy. So, all in all, setting up your YDP-103 shouldn’t take you more than half an hour.

Just ensure you have a screwdriver with you that you’ll use to assemble the base after which you’ll then attach the keyboard to it.

Of course this piano is quite heavy. On its own, it weighs about 82 pounds. So, in the box, it could be weighing something around a hundred pounds. If you’re thinking of doing this on your own, you probably can. But a more efficient move might be to get help. 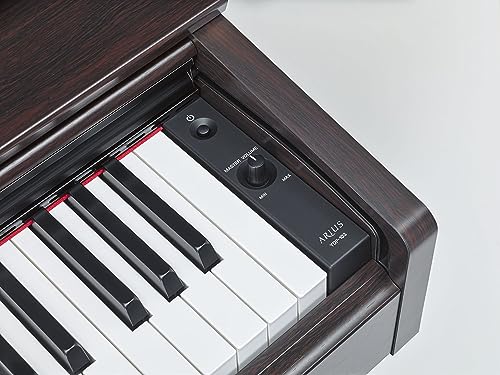 Now, as for build quality, this piano is rock solid. And that’s something we’ve come to expect from Yamaha pianos. Thankfully, we were not disappointed here either. Although not exactly made from real wood, the piano features a wood finish. And this wood finish gives the piano a good look and feel.

So, although this is Yamaha’s lowest end piano in the Arius series, it is definitely not cheap-feeling or cheap-looking at all. This is one high quality and reliable unit.

Also, the YDP-103 features a sliding key cover which keeps your piano from the dirt and dust.

Lastly on this section, we’ll talk color… The YDP-103 is only available in Dark Rosewood, which means this does not come in a black finish. We know loads of people would have loved to have the black finish but hey variety is the spice of life.

And if it really bothers you, the Dark Rosewood finish is so dark it almost looks black from afar. So, it shouldn’t be your deal breaker.

Yamaha kept things very straightforward on the YDP-103 which is quite unlike the YDP-143 whose user interface requires a learning curve to get used to.

In fact on the YDP-103, you’ll only find two buttons and one knob which is for the volume. To access all the features and functions in this piano, you’d have to do a button and key combination. So, oftentimes, you’d have to hold down the Function button and then press the corresponding key.

It’s not entirely convenient we agree but this is not peculiar to the Yamaha YDP-103. 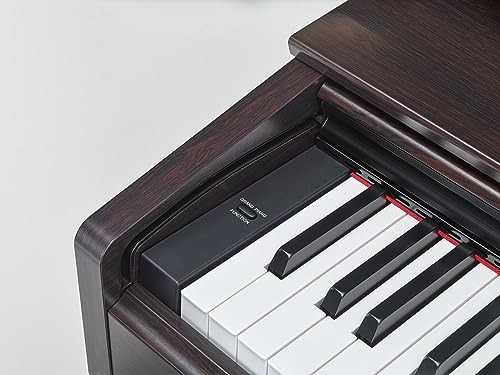 The keyboard on the YDP-103 is the same as you’ll find in Yamaha’s series of portable, entry-level pianos like the P-115 and the P255. And that is the Graded Hammer Standard or the GHS.

For an entry-level keyboard, the GHS is pretty good. It gives sufficient action and is somewhat realistic to the touch. However, the GHS still remains Yamaha’s most affordable action. And we’ve seen loads of keyboards at the same price point that beat the GHS pants down.

A good example is Casio’s Tri-sensor Hammer Action II. And this is supposed to be coming from a brand that makes “toy instruments”. But hey, this is just in our honest opinion. To each man his own.

Anyway, the keyboard on the YDP-103 is graded, of course. So, it’s going to feel heavier on the bass notes than it feels on the higher notes end.

Also, the keys are touch sensitive which means that you can vary the volume sound you get from your keyboard by varying the intensity of your play. And since the sensitivity is also adjustable, you can also control the response of your keyboard as well.

There are four preset levels which are the soft, hard, medium, and fixed. Putting your keyboard on “Fixed” means that the keyboard gives the same volume however you strike the keys. “Soft’, on the other hand, means that your keyboard varies the volume as you play but only subtly.

But if you want the widest response range, then you want to adjust the setting to “Hard”.

Now, there are no ivory/ebony simulations on this keyboard. So, the keys might start to feel plasticky at some point. But, at least, Yamaha was able to give the black keys a matte finish. So, that helps.

Of course, this sound engine won’t deliver as well as the Pure CF or the CFX but at least, it is fair.

The samples used for the Yamaha YDP-103 were obtained from an actual grand. And these samples Yamaha obtained at different velocities so that the keyboard delivers on a wide range of expressiveness.

Alright, now the built-in tones. Well, this is another area where we are a bit disappointed. There are only 10 of them on this piano pretty much like its older siblings. So, it makes the piano a little uninspiring for  the most part.

Anyway, here are the built-in tones…

The Concert Grand Piano sound is quite warm just like you’d find on Yamaha pianos. The Bright Piano tone on the other hand, is a lot clearer and brighter. That’s definitely something you’d appreciate if you’re in a band situation.

Now, here are the more technical details for those who’re interested. 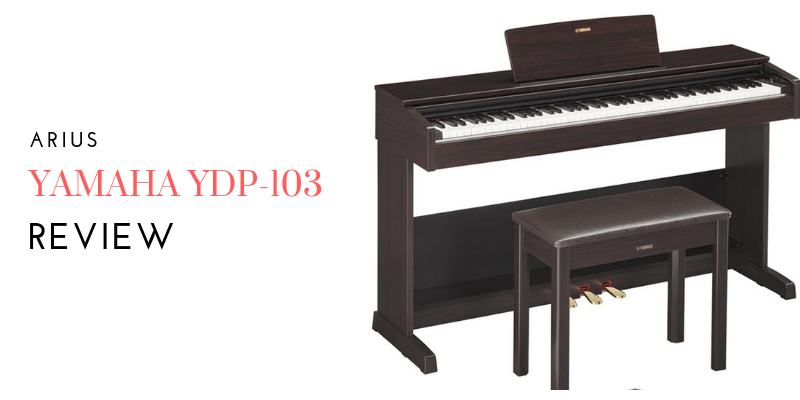 You’ve seen with your own eyes, the Yamaha YDP-103 is quite good but it comes with very limited features and functions. And this is the reason we recommend this as an entry-level piano at best. It just isn’t all that and experienced players are going to need more than this model can give.

But if what you’re looking for is just an affordable family piano for the ambience and for recreational playing alone, then you got it. The YDP-103 makes a really great choice.

However, if you want more than this currently offers, then consider ordering the next model up which is the YDP-143. Or you could also consider the YDP-163.