The Yamaha YDP-163B shares very similar features with its baby brother, the Yamaha YDP-143. It’s also from the Arius series and comes at the mid-range point. So, it’s somewhat affordable especially as a family piano.

Since we have already reviewed the Yamaha YDP-143, we will be doing a quick comparison between the two keyboards in our today’s review. There isn’t too much of a difference between them, actually. And we know that a lot of people are wondering which it would be wiser to get, whether the YDP-143 or the YDP-163B.

Today, we answer that question. And we hope that our detailed review helps you make an informed choice if you’re one of those in that conundrum.

If you can’t afford the time to go into the in-depth review, here’s a brief summary below that you can quickly peruse. 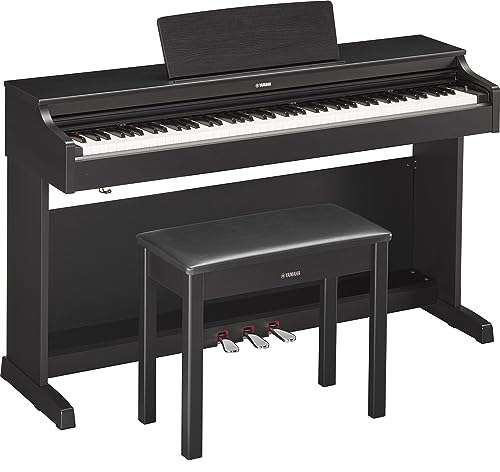 The difference between the YDP-143 and the YDP-163B isn’t huge. However, the difference in price range is, about $300 to be precise. Now, if you’re wondering if the extra Franklins are worth it, the answer isn’t just cut and dried. There are many facets to this one.

In the first place, both look really good and will make fine family pianos. Plus, their sound and most other features are practically the same. Both use the Pure CF sound engine and come with 10 built-in tones, few sound effects, and no organic piano element at all like a String Resonance.

However, one area where the YDP-163 one ups the YDP-143 is the feel of the keyboard. Yamaha made a fantastic upgrade in that respect. The ivory keytops that we missed on the Yamaha YDP-143 comes in the YDP-163B. And for that, we really appreciate the Yamaha YDP-163B. 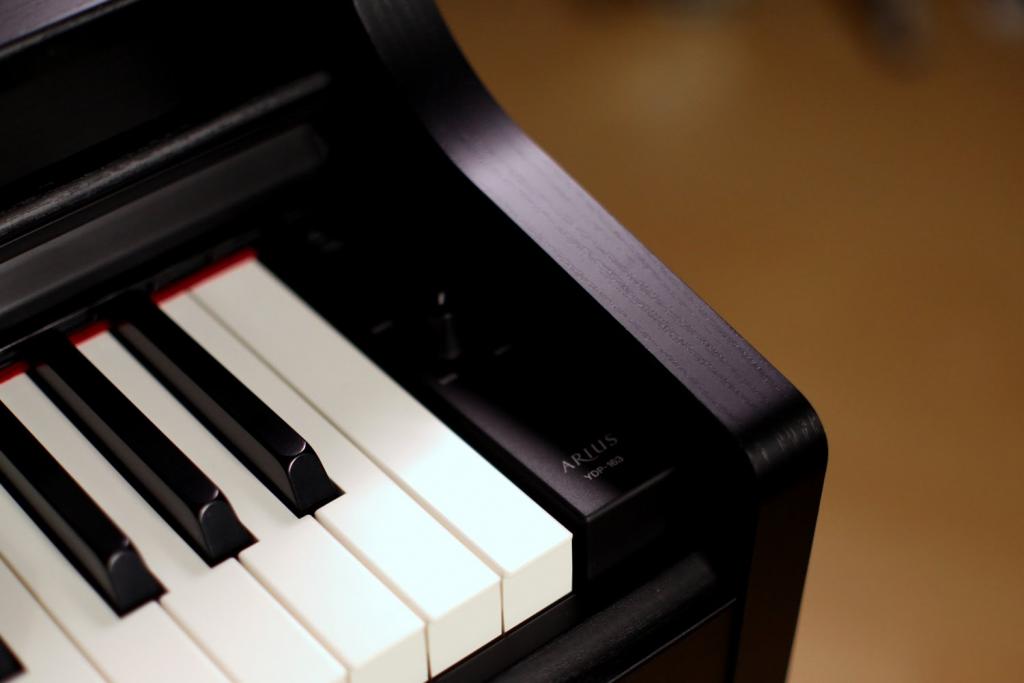 Plus, it also comes with 3 sensors too whereas the YDP-143 only comes with 2.

Now, to the big question, is it worth it spending the extra for the upgrade?

This is what we will say. If you’re a beginner, there’s no point killing yourself trying to get the YDP-163B if it’s out of your reach. It’s not completely necessary since you don’t necessarily enjoy any specific benefit. An advanced player though will love it and appreciate it much better than the beginner.

And now to the full review…

Design – Slightly Bigger Than The YDP-143

In design, the YDP-143 and the YDP-163B are somewhat identical. They both share a similar and elegant wooden cabinet. Plus, they both come with a bench in the package as well.

Now, here’s the small difference though, there is an improvement on the YDP-163B’s keyboard. So, it kinda makes the keyboard a bit bigger and slightly heavier than the YDP-143. But that’s just on paper. There isn’t so much of a difference between both keyboards in size real life.

Another point of similarity between both keyboards is that they both come in two finishes which are the Black Walnut and the Dark Rosewood. Although the one we are reviewing today is the one with the Black Walnut finish. 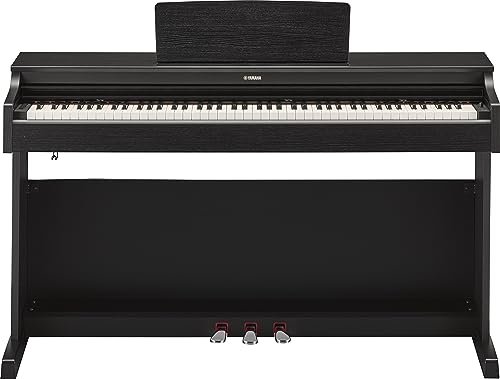 Yes, there’s also the option for the White and the White Ash similar to the YDP-143 too. However, these models are only available in Europe and the UK.

We still find it somewhat funny that Yamaha decided not to make the color options more varied to the US market. Color options are always a good thing but hey that ship has sailed already.

What we can say though is that the available colors, nonetheless, are still great enough to fit into almost any home décor.

So, design wise, these are the only differences. Like we said, there isn’t so much to compare.

Of all the different areas of the YDP-163, the keyboard is one feature where Yamaha made the biggest and most important upgrade. In fact, if you’re deciding between the two pianos, you might want to have the first look at the keyboard.

Now check it out…

The Yamaha YDP-143 comes with the Graded Hammer Standard (GHS) action. This is Yamaha’s most affordable action on a fully-weighted keyboard.

On the other hand, the Yamaha YDP-163B comes with a more advanced action which is called the Graded Hammer 3 (GH3) action. You can also find this action on other higher end models like the YDP-S52, and the P-255.

Of course the more advanced Graded Hammer 3 is way better than the average GHS keyboard. But that’s just our opinion. You might have your own personal preferences and tastes which might make you more of a heavy hammer action lover than a lighter hammer action lover. 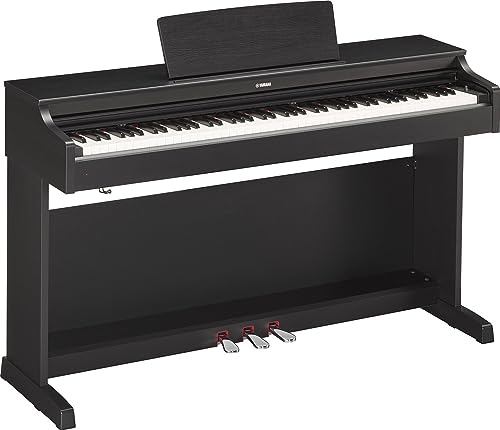 The GH3 does, in fact, feel somewhat heavier than the GHS. And this is the very same reason some people are not totally in love with the YDP-163B. They feel the keyboard is somewhat too stiff to play.

Actually, this is quite true especially for beginners who are still building finger strength.

However, on the other hand, the GH3 feels really heavy, a bit heavier than some acoustic pianos actually. Some experienced hands might like it but not all. It still feels a bit too heavy for even some advanced players.

After the keyboard, the speakers are the second biggest upgrade Yamaha made on the YDP-163B. Although both speakers come in the same oval shape and dimensions, they deliver different power outputs.

Well, yes but that’s only on paper. The truth is that, real life, it’s not really so noticeable. Both pianos actually sound pretty decent enough even without speakers. And you can comfortably play to a small or medium audience conveniently. It could even disturb your neighbors a bit. 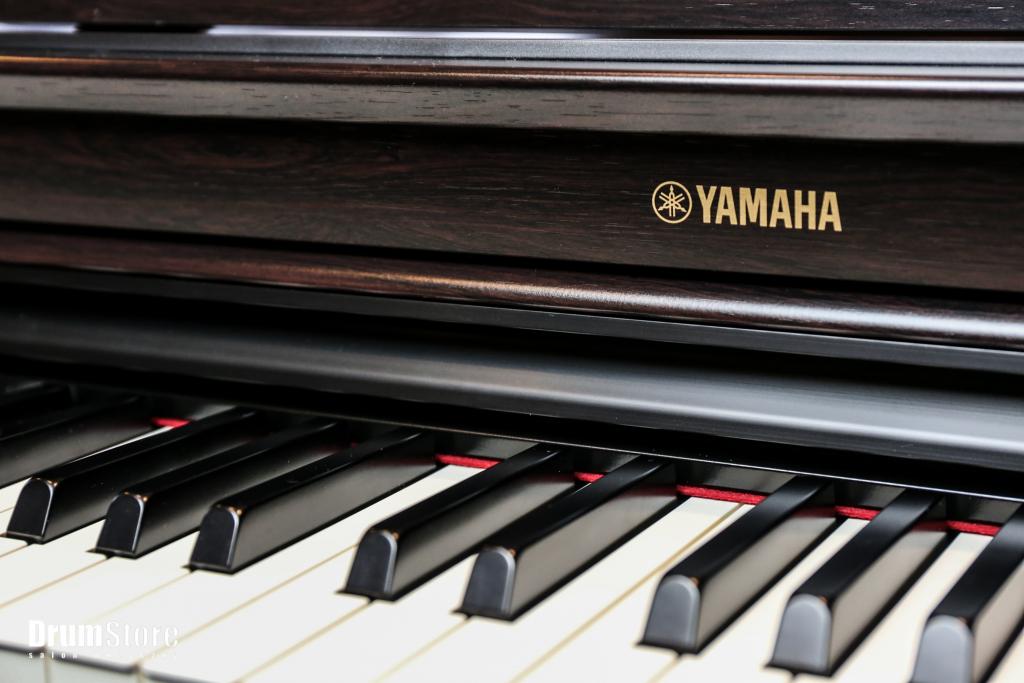 But that said, the improved speakers on the YDP-163B actually do make a bit of a difference in the sound you get from both pianos. For one, on the YDP-163B, the sound feels a little richer and deeper especially when you play in the lower register.

And it’s not just the bass notes, the treble register is a tad bit clearer and has more crispiness too.

But altogether, speakers regardless, both instruments sound great. So, it might not necessarily be a deal breaker for us if we were to pick between the YDP-143 and the YDP-163B.

And for those looking for more details, here are the technical details of the Yamaha YDP-163B. 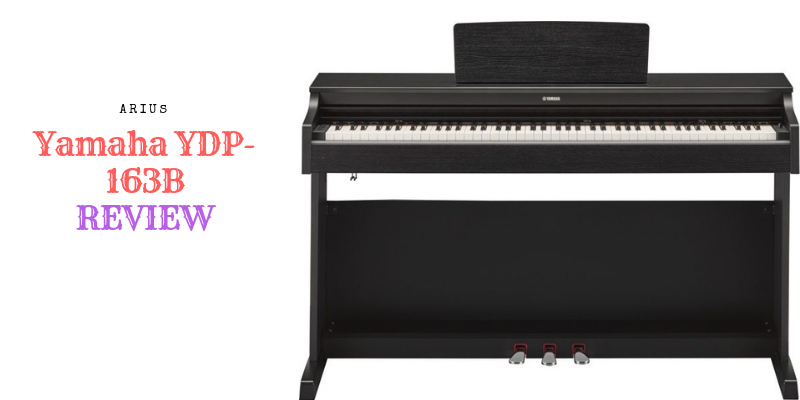 From our comparison, we’ve been able to show you that there isn’t much of a difference between both keyboards. So, to the big question about whether it’s a wise investment paying the extra for the YDP-163B.

The primary feature of both pianos that you want to consider is the keyboard. If you’re a beginner, there isn’t so much you stand to gain spending the extra on the YDP-163B. Plus, the keyboard might even be a bit too stiff for you.

However, if you’re a more advanced player, and you love your keyboard a bit stiff and heavy, then YDP-163B is a good choice. But that’s about the only all-important upgrade on this keyboard.

Now, that you know, which would you pick and why? The ball has always been in your court!