Make no mistake, Yamahaares famous for their motorcycles, but they are also famous for their pianos and other musical instruments. They have become a massive multinational and are a constituent member of the Nikkei 225. They produce without question some of the world’s finest concert grand pianos. That are used by the finest pianists in every corner of the world.

Initially founded in 1887 as a reed organ manufacturer, Yamaha has grown to become one of the largest conglomerates in the world. But it still retains its musical roots with its logo which hasn’t changed. It still shows three tuning forks intertwined. In fact, whilst Yamaha is the largest manufacturer of pianos in the world, it is also the largest producer of musical instruments on the planet.

There is no other company in the world, ever, that can lay claim to this companies achievements. People have used their motorcycles to win world championships, their archery equipment to win Olympic Gold. As well as Nine times winner of the Dakar rally using their off-road bikes! 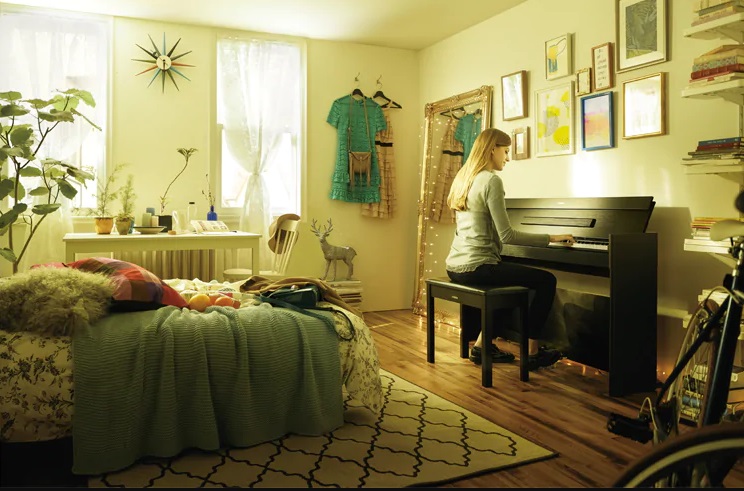 On top of this, their guitars used by some of the world’s top musicians. World-famous drummers bang their drum kits. And, of course, their pianos as we mentioned, used in the great venues of the world, classical and modern.

Now they are involved in so many different areas it is hard to keep track. But excellence is what they aspire, to in whatever they are developing.

The piano though is what we are concerned with today and particularly the YDP S54B Arius. So, let’s take a closer look, in our Yamaha YDPS54B Digital Piano Review…

Yamaha design and manufacture pianos for every level of player from complete beginner to a concertmaster. The S54B is very much an introduction level piano for beginners, but its quality makes it usable by professional players as well. 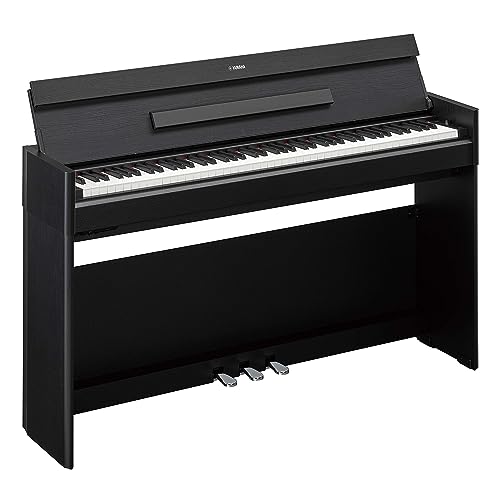 This piano has been designed to take up as little space as possible without reducing its sound or playability qualities. It is very compact and referred to by Yamaha as slimline. It is certainly that. Made from fiberboard, it is finished in an attractive Black Walnut

The design is simple and functional, and made to be quite sturdy, given its size. The side panels, for instance, are solid and are the full width of the piano for stability and it has a flat top giving it a contemporary and pleasing style. 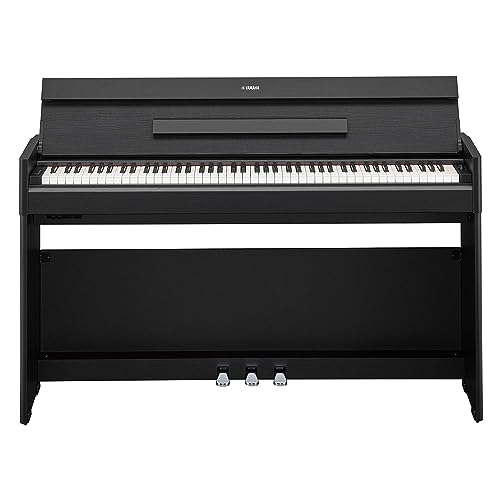 Based on an upright…

You get the feeling that the designers have looked at an upright acoustic piano and used that as their base model. Just like on an acoustic upright, the music rest is on the underside of the full-length key cover. A further likeness is that the key cover is the folding design. When the piano is not in use, then it has a distinguishable flat surface. The key cover has a soft closing feature which means it cannot be knocked or dropped onto the keys.

A three-pedal configuration is built-in to the digital piano and not an extra. They are the usual sustain/damper, soft and sostenuto pedals. Half pedaling facility, which is necessary for some classical pieces, is built-in. This allows you to gradually increase the sustain if required by applying more pressure with the foot.

The compact and space-saving design makes this particular piano perfect for smaller spaces, even bedrooms.

The keys are made of plastic which is acceptable given the price tag for this instrument, with the tops covered in synthetic ivory and ebony surfaces. The keys are nicely made and solid and well-spaced.

Built-in to the S54B is its own amplifier and speakers. More on this later…

Because this piano concentrates more on the playing and sound features rather than connectivity. The controls are basic and simple to use. Being positioned near to the keyboard also makes them easy to use. To the right are the power button and volume control. To the left seven button controls, including the play and record controls and the metronome. LED lights accompany four of them. There are some more features, but these are accessed through using buttons and piano keys together.

There is a USB port to give you access to a computer or mobile device should you need it.

Yamaha has kept it simple, which will almost certainly not impress those who think all instruments should be loaded down with tech. We think it makes a refreshing change. 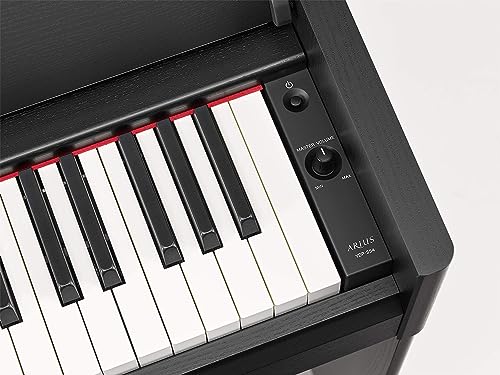 The first of the crucial areas.

It is an 88-key piano, aimed at the beginner. But it is capable of a level of playability that will suit more experienced players. The idea is to give the student a feeling of the real thing and the sound to go with it.

Yamaha has installed its Graded Hammer 3 action (GH3) which is an action you will find on pianos at a much higher price range. And a system that is respected for the authenticity of the feel and the response created.

GH3 uses actual hammers applied to each key to give realism, and the weight of the hammers is graded. The bass keys are heavier than the treble keys just as they are on an acoustic piano. The three in the title indicates the use of the triple sensor technology – the three sensors that improve how the piano behaves with each user. 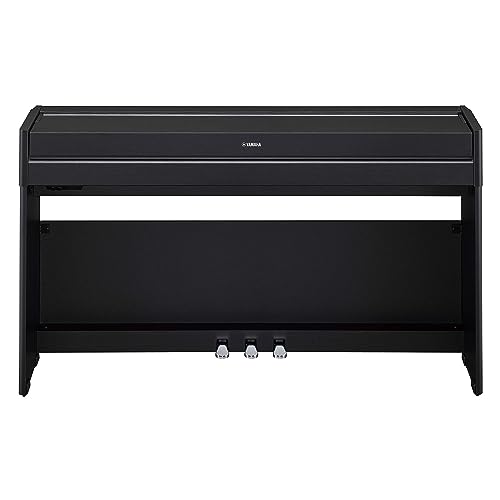 There are four sensitivity settings, soft, medium, and hard. A fourth, fixed, will turn off the sensitivity option.

It is not Yamaha’s most critical system and sits in the middle of their range.

As we have already referred to, the half-damper facility adds expression and realism to the way the piano behaves. And included in the playing facilities are Dual and Duo modes. While the playing action is smooth and not ‘sticky.’ And while plastic keys will never feel the same as concert grand wooden keys, the feel on the fingers is positive.

It is a balanced and realistic playing experience. Not like pianos many times the cost of course, but for the market it is aimed at, it is good to play and gives off the atmosphere and feeling of the real thing.

Please forgive us if we are a bit ‘old-school’ about this. When we buy a piano, we are interested in a few things. How is it built, what does it look like, but the most important considerations are firstly how well does it play and secondly, what does it sound like. We are not so much interested in how much tech they have packed into it. That doesn’t impress us. A nice hammer action keyboard and a realistic and inspiring sound do.

For the price it has definitely passed the first test – playability, so what about the second, the sound?

In terms of the best concert grand pianos, there is not a lot that is better than the Yamaha CFX Concert Grand piano. You could say that this full-size nine-foot masterpiece represents the summit of their manufacturing excellence. It is a piano that if you bought new today would see you pay about $180,000.

The S54 includes the CFX sound engine which includes damper resonance as well as string resonance. It uses these to create an often stunning replication of one of the best pianos in the world. The stereo samples reproduce the sound of the CFX with accuracy.

Polyphony of 192 notes allows the player to handle some quite complex music and is going to have enough without any drop-offs for even the most seasoned professional player.

We mentioned earlier the built-in amplifier and speakers. The two 12 cm speakers and two 20 watt amps that have been included in the build will deliver a decent crisp sound and a reasonable balance across the frequencies. Certainly, enough for you to hear the richness of the sound of the piano. And they have made it close to the actual volume of a real acoustic piano.

If you do want it a little louder, then please check out our reviews of the best keyboard amplifiers.

The balance of high and low frequencies are controlled by built-in Intelligent Acoustic Control so that playing at high or lower volumes is balanced and natural. If you prefer a little privacy to what you are doing, then you can just plug in your headphones. 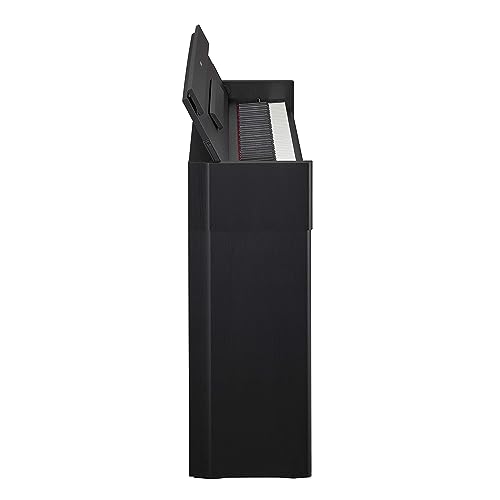 There are not many what you might call ’extras’ attached to this piano, but reverb is one one of them. Well, four different kinds of reverb actually to give a little extra to your playing. These are two hall effects, Recital, small hall and Concert, large venue, Chamber and Club.

For the price of this piano, we doubt you will find a piano that is better sounding than the S54B. Not the best of the Yamaha range of course, but for its position in the piano hierarchy, it’s a great buy based on its sound.

Extras, not many but a few nice ones.

There are some sounds included, with three grand pianos and two organs. As well as two electric pianos and a harpsichord and vibraphone. And adding some strings was a nice touch, especially as there is a layering facility where two voices can be played together.

Installed are one or two little extras that are designed to assist the improving player. App-based options using ‘Smart Pianist’ IOS gives you some extra sound options and recording and playback of what you are doing. There is also a songbook of fifty songs in the memory onboard, and there are two headphone jacks if you might be teaching and want to use them.

All these great features make the YDPS54B one of the best digital pianos for beginners that you can currently buy.

As a starter piano, it is not what you might call cheap. It is a Yamaha after all, and for that, you will pay a little extra. Fair enough, there aren’t any other pianos for the learner with the Yamaha CFX concert grand engine built-in.

It’s more than that, though. It is compact and will fit into small spaces, it is well-made and has a sturdy build, and as a piece of furniture will fit just about every room design. The playing action is adjustable and smooth with big polyphony and feels authentic.

For a piano designed for the learner or an improver, it is just a great option, but experienced players will also find benefits from having this as a practice piano at home.

But, let us look at a few potential negatives to balance things up…

It comes flat-packed so will have to be assembled. Not really a negative, they all do.

It is a bit light on the technical inclusions? Possibly. But from our point of view a blessed relief to just be talking about the piano and how it plays and sounds. Makes a change from talking about connectivity and such stuff. Before people start hopping up and down saying ‘it’s what’s happening now,’ maybe it is, but we prefer a piano to be that.

Having said that, including an App and encouraging players to use it, but only giving them a USB port rather than Bluetooth to use it is a little strange

Nothing so far then, oh hang on, no bench seat. It is a slimline model it wouldn’t have one.

No negatives where we are concerned, just a great product from one of, if not, the world’s best.