The Zoom G5n multi-effects processor is the company’s latest iteration of a very successful line of programmable pedal boards for guitarists. It was released in 2016 and is still going strong. Editing patches of multiple effects is generally straightforward and intuitive, and it sounds very good, especially for its modest price.

According to Zoom, the “N” in the name refers to “Next,” so we’ve added a section for current G5 owners who are thinking of upgrading.

So, let’s take a closer look at what the G5N offers in our in-depth Zoom G5N Review…

The Zoom G5N comes loaded with 126 excellent digital effects of all kinds. These include overdrive, distortion, reverb, delay, EQ, compression, chorus, vibrato, octave doubling… just about anything you could get from stompboxes. 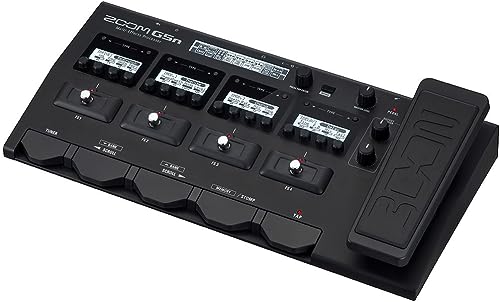 Nine at a time…

Up to 9 effects may be connected in any order into a “patch.” The G5n can save and recall 200 patches with effects settings and on/off states.

From the factory, you get 124 patches that recreate the iconic tones of guitar masters like Jimi Hendrix, Carlos Santana, Jimmy Page, and Eddie Van Halen. Zoom has provided regular firmware updates and added new amps and effect models. These can be downloaded from their web site.

Or six at a time with an amp and cab…

It’s important to know that an amp simulator is considered as two patches, plus the cabinet. So if you have a patch with an amp and cab simulator, only six additional effects can be added. And if you reach the G5n’s DSP power limit before you have a full patch, you can’t add more.

Patches are organized into 50 “banks” of four patches. You can quickly select different banks using the onboard Scroll footswitches. An Auto Save function makes sure your work isn’t lost.

And The G5n Has A Few More Built-in Features!

A drum machine provides 68 rhythm patterns in different styles. And a mono/stereo looper can record and overdub phrases of up to 80 seconds. It occupies two units and has dedicated footswitches to start and stop phrases.

Both the drum machine and looper count as effects. This can lead to a frustrating situation if you want to edit a fully-loaded patch to add the looper and drums. In that case, you’ll have to remove two effects to make room.

There’s also a built-in tuner. The G5n doesn’t consider it an effect, so it’s always available, regardless of the patch selected.

The G5n has a logical, modular layout that makes it easy to learn and program. The case is rugged and solid black, which looks sleek but can present problems onstage in low light (more on that below).

At the top is a 256 x 32 pixel LCD display that shows which effects comprise the current patch. Next to the display is a control knob, which you use to add, remove, or reposition effects within patches. In the right-hand corner is a master volume control.

Most of the action takes place in the middle…

Four large “units” each have an LCD display, four parameter knobs, and a stomp box-style footswitch. A few more complex effects require more than one unit for editing.

The stomp footswitches are raised above the surface, so you don’t accidentally bump a parameter knob when selecting a patch. But because they’re close together, you still need to exercise caution. Above each footswitch is a red LED that lights up when that patch is selected.

Give it a bit of boost…

To the right of the unit are master Tone and Boost controls. Tone affects treble frequencies, with the center position providing a flat response. Boost increases the signal just before the output, emulating a tube booster. 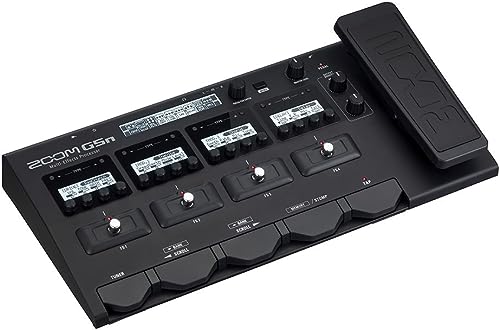 At the far right is the Zoom expression pedal. You can set it up as a volume or wah pedal, or assign it to any other effect parameter.

Along the bottom of the box are five lever-type footswitches. The switch on the left activates the G5n’s chromatic tuner. It supports all standard guitar tunings, including open and drop tuning. The base pitch can be set in the range of 435-445 Hertz.

Next to the tuner switch are two marked Scroll Up and Down. You use these to select different patch banks.

Following that is the MEMORY/Stop switch, which selects the G5n’s operation mode. In Stomp mode, you select patches by pressing the unit footswitches. MEMORY mode is where you edit patches and create banks.

The Tap switch on the far right lets you set tempos for the looper and certain other effects.

Of course, there’s a standard 1/4-inch input jack for your guitar. In addition, an auxiliary stereo input jack lets you connect a smartphone or music player. And a control input is designed for an external foot pedal.

Dual 1/4-inch output jacks connect to guitar amps or a PA system. There’s also a dedicated stereo headphone output. Optional XLR connectors would be nice, but at this price point, it’s not a deal breaker. The G5n doesn’t have FX Send and Return jacks, so it’s not possible to add your favorite pedal to the chain.

With the onboard USB port, you can update your firmware or download new effects and patches. It also turns the G5n into a Macintosh or Windows audio interface for computers with direct zero-latency. Unfortunately, it can’t function as a MIDI In or Out port.

The Zoom G5n won’t give you all of the sonic subtlety and complexity of expensive specialty pedals. And the sound quality is very subjective. But in our opinion, you get an excellent assortment of effects that hold their own very well.

The acoustic guitar simulator is outstanding. As mentioned, the amp and cabinet sims are also quite good. The wah even sounds like a top brand dedicated wah pedal. And the overdrives are nice and crunchy. Zoom has, in fact, engaged several well-known professional guitarists to develop some signature patches for you to download.

Zoom’s Guitar Lab 3.0 application for Macintosh and Windows gives you access to a library of amp models, effects, and patches. You can also edit effect parameters, build effects chains, and back up your patches.

Guitar Lab 3.0 also monitors the G5n’s CPU usage while you edit to help you design patches that use its DSP power efficiently. A clipboard function can remember four effects with custom parameters, so it’s easy to copy and paste among patches.

Changes From The Zoom G5

If you already own the G5 or other previous Zoom multi-effects processor model, maybe you’re considering upgrading. You should understand that the G5n is less of an upgrade and more a re-imagining of the product. There are several significant differences between the two products.

The first thing you’ll probably notice is the G5n’s double row of switches. The stomp switches to activate a patch are separate from the ones at the bottom used to select banks, tap tempo or activate the tuner.

Also, the G5n has a conveniently located master volume control. This was noticeably absent on the original G5.

Sonically, the consensus is that the G5n sounds better, especially the amp and cabinet simulators. Also, if you turn off a reverb or delay effect while playing, the G5n won’t cut off the tails as the G5 did.

But There Are A Few Complaints…

The G5n has a solid black case, whereas the G5 was silver. On a dark stage, it’s possible to press the wrong footswitch by mistake, or accidentally engaging the tuner (which mutes the output) when trying to scroll to a different patch bank.

Finally, the G5’s top row buttons had LEDs that turned red or green when using the tuner. The G5n uses the main LCD display, which can seem less intuitive, especially in low light.

Because some controls have been added and others removed, the workflow to create and edit patches has changed. Original G5 users may need time to get acquainted with the new workflow before the G5n feels as easy to use.

If you’re looking for some other options to compare with the Zoom G5N, then please check out our reviews of the Best Multi Effects Pedals currently available.

So how does the Zoom G5n stack up?

The Zoom G5n multi-effects processor is an excellent entry-level pedal board that offers great value. You’ll find it useful for practice, or in the studio or on stage. It’s simple to program and use. It may not sound as great as a board loaded with boutique standalone pedals, each of which can cost more than a G5n. But most of the effects are at least very good, and some are outstanding.